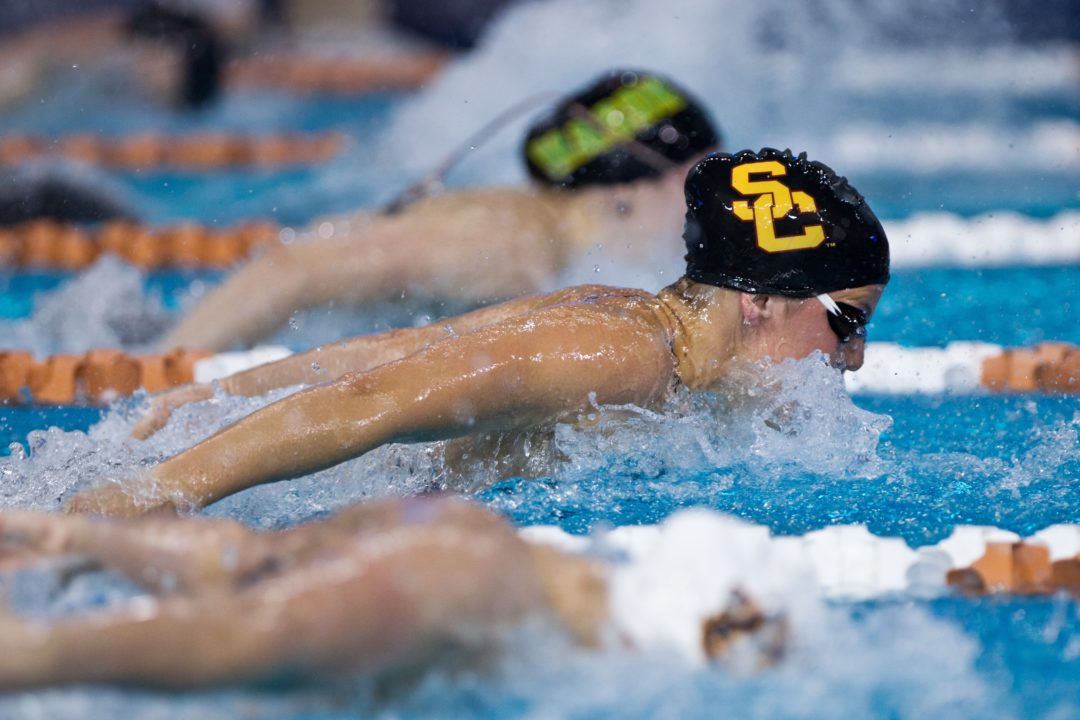 USC's Stina Gardell was out very fast in the 400 IM en route to a season-best and a new Meet Record. (Stock Photo: Tim Binning/TheSwimPictures.com)

On day 3 of the 2013 Swedish Championships in Halmstad, the women were again the stars of the meet.

Sarah Sjostrom picked up her 3rd win of the meet, with this one coming in the 50 free in 24.97. This is an event that lines up a little better for her full concentration in this year’s World Championship schedule if she can slide through the semi-finals. Magdalena Kuras was 2nd in 25.68, and Louise Hansson was 3rd in 25.98. That result might not seem as good for Hansson as we saw from her earlier in the meet, but the 16-year old is not a great sprinter (as compared to the 200 free and 100 fly), and the swim is within two-tenths of her lifetime best.

In other good performances, USC’s Stina Gardell took the win in the 400 IM in 4:42.20, which is her best time of the season. She went out very hard in this swim, turning into the freestyle in 3:36.63, at which point she fatigued. That’s still a very good result for her headed into the World Championships in the post-Olympic year.

That swim for Gardell also breaks the Meet Record, which she held from 2011, by 2.2 seconds: a huge margin. She isn’t as fast in-season as she was in 2012, with the difference being that this year, she hasn’t had to work quite as hard to prove her worthiness for Worlds as she did for the Olympics.

This is a bit off-topic but I think one thing should be highlighted after all the discussions about bad audiences. A Swedish system to arrange a whole bunch of National Championships (Championships week) at the same time and place has certainly some advantages. A total of 31 different sports has its championships ongoing in Halmstad, Sweden right now, of which swimming and atletics are probably the most prominent ones. If anyone is interested to see the list of sports, it’s here (in Swedish though): http://www.rf.se/Arbetsrum/SM-veckan/Deltagandeidrotter/ What are the advantages then? It becomes easier for many sports to entice good audiences since it’s like National Olympics. Many people wouldn’t travel to see one sport but if there is possibility to see… Read more »