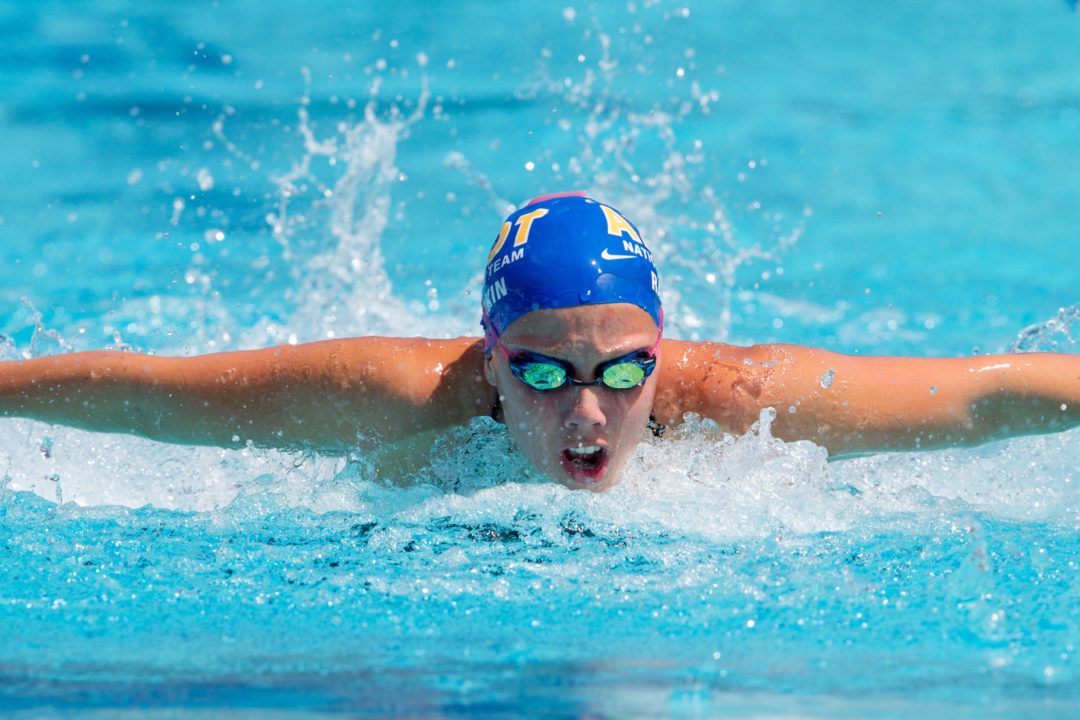 The CIF-SS Championships were all wrapped up last night in Riverside under the lights (and, for the second time this...

The CIF-SS Championships were all wrapped up last night in Riverside under the lights (and, for the second time this season, a high school sent out to a huge audience via a major sports network – FoxSports); and a pair of champions were crowned at the Division 1 Championships

The boys of Capistrano Valley had a runaway victory, but we saw a pair of new title-holders in this meet after the girls’ race came down to the final event.

The defending champion University girls held a slight lead headed into the 400 free relay, and with their studs Cheyenne Low and Megan Rankin still with a relay left to swim, they had to be feeling good about their chances against a Jserra High relay that featured three freshmen. But that happens to be an unbelievable three freshmen, and anchored by a 49.72 from Katie McLaughlin, the girls from Jserra won the 400 free relay, and took the team title by exactly a single point.

The winner of that 500 was La Canada senior Katy Campbell in 4:42.83. She’s another big-time signing in the class for the UCLA Bruins. She will join Rankin next year at UCLA’s Spieker Aquatics Center.

Outside of Campbell and Rankin, however, this was a meet dominated by freshmen on the girls’ side. Exactly half of the individual swimming races (4 out of 8 ) were won by the rookies: an unprecedented amount of success at this high of a level.

The aforementioned McLaughlin won the girls’ 100 fly in 53.70 – which is a huge personal best for her (by seven-tenths). She also swam well for a best time in the 200 free in 1:47.52, but that only placed her second, behind another freshman: Woodbridge’s Daniela Georges.

Freshman Abbey Weitzeil of Saugus High School pulled off a rare double in the sprint freestyles, with a 23.07 win in the 50 and a very fast 49.6 in the 100. Nobody has pulled that off since Fountain Valley’s Cynthia Fascella did it in 2008 as only a sophomore; in two more tries after that, she couldn’t even repeat it. For a freshman like Weitzel to do it speaks volumes about her talent.

On the boys’ side, Redlands sophomore Kyle Gornay put the National Records on notice thanks to his Sectional-standard-breaking 47.29 to win the boys’ 100 fly. In a year that has seen a ton of outstanding 100 flys around the country from high schoolers, as fast as Maclin Davis’ 46.64 from the Tennessee meet earlier in the year was (broke the record by four-tenths), it might not last for long. Gornay added a second individual win in the 100 backstroke with a 48.17.

The Loyola boys were held off of repeating as champions despite the best efforts of their star senior Fred Abramyan. The unsigned sprinter (you’ll have trouble believing that after you hear his times) won the 50 and 100 frees in 20.44 and 44.43, both of which are lifetime bests for him.

But it was the Capistrano Valley boys, including a great sprinter of their own in Jack Descombes, who took top honors. The junior took 2nd in the 100 free in 44.92, and anchored the Cougars’ 400 free relay in a 44.2 to take his team to victory. For those curious, Capistrano Valley is in Mission Viejo, and largely connected to the Nadadores.

Given that, it should come as no surprise that those boys cracked open this meet during the 500 free, where they placed 4 swimmers in the top 6. That was led by a second-place finish from Logan Redondo in 4:25.29. If you add on the win by Janardan Burns of Aliso Niguel (4:23.55) and David Heron from Mission Viejo High, the entire top 6 was made up of swimmers who train under Bill Rose’s staff for the Mission Viejo Nadadores. That’s incredible.

shinji – we got a note from someone at USC confirming that right after posting. Nice signing for them!

Katie McLaughlin has a big talent. She’s a young girl to follow in butterfly and in freestyle.

CIF’s were fun this year. What’s not mentioned in your article was the University DQ’d in the medley relay that cost them 48 points. They broke the CIF record by over a second in a 1:42.3. Clearly the butterflyer jumped. Dispapointing because they still would have destroyed the record even with slow starts. They showed their strength by battling back by winning the last 2 events to put them up before the 400 free relay. First Low won the backstroke and then Maggie Burton defended her CIF title in the 100 breastroke to put University in a position to win the meet. Along the way though Jserra got lucky with not only the medley relay DQ but a couple of… Read more »

Even with the disqualification of the medley relay, University was still on paper heavily favored. The DQ just brought them back towards the rest of the pack… Don’t quite understand how Jserra (or Santa Margarita, who was still alive in the title race going into the final relay) was “lucky” when the University swimmers dropped in crucial positions. Swimmers from those two schools still had to move up positions to even have a chance going into the final relay – you can’t discount what they did. Next year looks to be another great battle for this title. While University loses a couple of big talents, with Maggie Burton and company the cupboards are not bare for the Trojans – they… Read more »

according to the seeding prior to prelims University only held a 305 to 265 lead over JSerra. Going into the final day University gained points and had a 66 point advantage over JSerra (334 to 268). Those numbers were calculated as if everyone where to hold their positions. Katie M. going down to Daniella from Woodbridge in the 200 free helped UNI but losing 48 points + 10 with Uni’s butterflier dropping from 1st in consolations to 7th hurt. There were a couple of other senario’s that hurt UNI as well. UNI could have stacked the 200 free relay by making 1 more move (putting Low on that relay to put the meet out of reach after Burton’s win in… Read more »