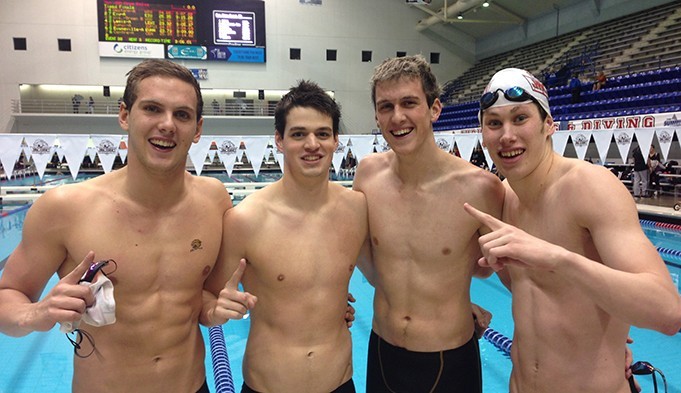 Jared Allen (second from right) graduated from IUPUI as a school record holder and is now a police officer in Indianapolis. Current photo via IUPUIJags.com

One teen died and another is in critical condition on Monday morning after a car carrying four teens crashed into a retention pond in a southeast Indianapolis neighborhood, police say. Former IUPUI swimmer Jared Allen, 25, was among the first officers on the scene and dove in to try and rescue those in the car that was 12 feet underwater and 35 feet from shore.

The other two other passengers, the driver and front-seat passenger, were able to swim safely to shore.

All four teens are students at Franklin Central High School.

The car they were driving in struck a tree and careened into the water on Frye Road. Allen happened to be in the area when the call came out.

“I got my equipment off and went in the water after them,” said Allen in a press conference on Sunday. “I had a rough idea of where the car might be.”

“I’m 6’6″, so I use my height as an advantage. I put my feet down and finally was able to find the top of the car,” Allen said. “After that, I started doing some controlled dives down. I was able to find some openings and started reaching around to see if I could find the kids.”

Allen says he tried opening his eyes, but in the muddy water he couldn’t see anything.

“There was zero visibility, so I didn’t try again after that point; I just felt my way around,” Allen said.

“I just wanted to get out there and get to them. I didn’t know how long they had already been in the water,” he added.

Two teens, 15-year-old Ella Magyar and a 16-year-old boy, were trapped in the car and two teens were able to make it to the bank on their own. All four teens are students at Franklin Central High School.

“I just wanted to get out there and get to them. I didn’t know how long they had already been in the water,” Allen said.

Allen, in spite of his desire to save all four teens, still received support for his actions to dive in.

“We had some bad press lately as police around the country have, so it feels good to get a little bit of thanks,” Allen said. “It’s what most of us expect of the other officers around us. And it’s what the community expects from us.”

All teens were out of the water within 10 minutes.

In addition to his background as a collegiate swimmer, Allen says that he received water rescue training at the police academy.

Allen finished his collegiate career at IUPUI in 2017, where he graduated as the school record holder in the 100 free. His record of 44.48 still stands, and he also ranks 2nd in program history in the 50 free.

Sorry to hear about the tragic accident and impressive the presence of mind Jared had during that moment. You figure its 11:00PM and in muddy water, so options of a rescue were limited.

Thank you for your efforts. That’s all anyone asks

Wow! What a terrible tragedy. Deepest condolences to Emma’s family and thank you to Jared for his service and bravery.