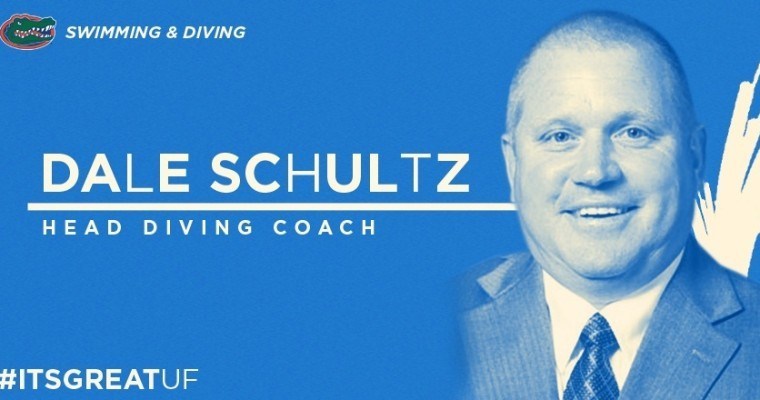 The Florida Gators have hired a new diving coach. Stock photo via University of Florida

GAINESVILLE, Fla. – Dale Schultz has been named the head diving coach at the University of Florida, Gator men’s and women’s swimming and diving head coach Gregg Troy announced Friday. Schultz comes to Gainesville from Noblesville, Indiana, where he was the Associate Head Coach at Ripfest Diving. Prior to that, Schultz spent 16 years at Southeastern Conference rival Arkansas (1989-2000, 2008-13) as the Razorbacks’ head diving coach.

“I’m very excited to meet all our student-athletes and get started,” Schultz said. “Coach Troy and I have always had a mutual respect for one another, so working with him and his staff feels like the right fit for me and my family.”

While overseeing the Razorbacks, Schultz, who was named the 1993 SEC Diving Coach of the Year, coached eight Arkansas student-athletes to a total of 19 All-America honors. At the SEC Championships, Schultz produced a pair of platform champions, with P.J. Murphy taking the men’s title in both 1993 and 1994. His 1994 squad scored 38 points at the NCAA Men’s Swimming & Diving Championships that contributed to Arkansas’ 20th-place team finish.

“Knowing the SEC and the level of competition gives me a great advantage coming to Florida,” Schultz continued. “I’m excited to join a staff that has been together for a long time and work with them as well as our young men and women to help the Gators win another national championship.”

Schultz spent the past year in Noblesville as a private instructor at Ripfest, where he coached many individuals, including his daughter, Brooke, who enters the 10th grade this fall.

“We are very excited to have Dale join us here in Gainesville,” Troy said. “He brings a wealth of knowledge and experience to our program. Having been in the conference (SEC), Dale knows the level of competition and what it takes for our student-athletes to succeed.”

Before arriving at Arkansas, Schultz served as the head diving coach at Purdue during the 1988-89 season, where he oversaw the development of a Canadian Games gold medalist, Eric VanKannl, as well as multiple Big Ten finalists and NCAA top-20 finishers. He also made stops at Idaho and Northern Michigan (Division II).

In addition to his success on the college scene, Schultz served as the team leader for the United States at the 1993 World University Games in Buffalo, N.Y.

A native of Akron, N.Y., Schultz is a 1984 graduate of Kansas State University, where he earned a B.S. in agriculture. In 1988, he earned his M.A. in exercise science while at Northern Michigan.

Schultz (53) and his wife Darby have three children, Hayden, Brooke and Collin. Hayden (17) is an AMA pro road racer as he competes in the Vance and Hines XR 1200 series as well as the SuperSport 600 class (cc). Brooke (15) is an accomplished diver, winning the 2013 Pan-Am Junior Championships bronze medal. Dale’s youngest son, Collin (12) is an amateur road racer.

Schultz is replacing Donnie Craine, who passed away in April 2014. Craine steered the Gator diving program for the past 30 seasons and he was named the SEC Diving Coach of the Year five times at UF. Craine coached five NCAA champions, including Florida’s first – Chris Snode in 1978 (3-meter springboard).

“Donnie (Craine) was a close friend and mentor to me throughout my career,” Schultz said. “I just want to continue to move this program forward and build on the success and tradition that he set up at the University of Florida.”

“Dale was great friends with Donnie (Craine), so he knows how much he meant to this program and he understands what we like to do,” Troy said. “Dale has an interest in our entire program as he knows that diving is just one part of it. That makes him unique.”

The above is a press release submitted by the University of Florida.