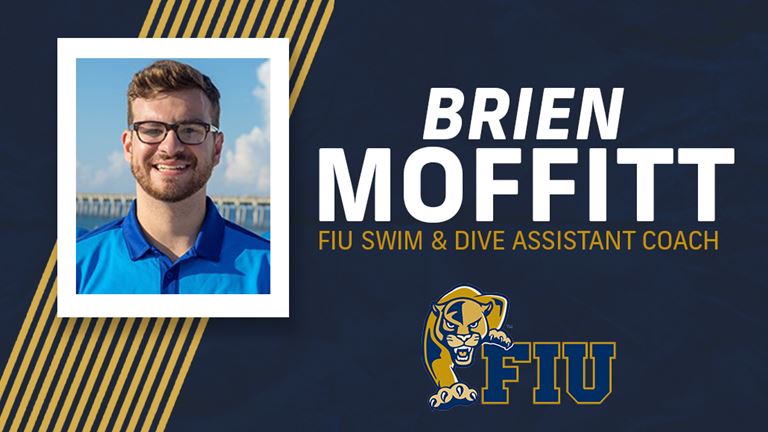 Correction: a previous version of this article indicated that FIU was expanding their roster; in fact, former associate head coach Ignacio Gayo has taken a job as an assistant at Northwestern.

NCAA Division I Florida International University has announced the hiring of Brien Moffitt as the new assistant of their women’s swimming & diving team. Moffitt spent last season as a volunter assistant with the men’s and women’s teams at Florida State University, where he focused on data collection, workout metrics, filming, and stroke analytics.

This will be Moffitt’s first paid collegiate coaching job. He has previous stops as a volunteer assistant at West Florida.

As an athlete, he swam at Division II Grand Valley State from 2013 through 2017 and was elected team captain as a senior.

Born and raised in Rochester Hills, Michigan, Moffitt received a Bachelor’s Degree in Business Administration from Grand Valley State University in 2017, while double majoring in finance and general management. He obtained a Master’s Degree in Education from the University of West Florida in 2019.

So many good female coaches out there now. Seems strange that a female only team has an all Male Coaching staff. Head coach should know better, be better, and have a female on staff to help the program reach higher levels. Too bad.

Except in this case brien is an exceptional hire, exceptional person, and most importantly for his job, an exceptional coach. I personally swam under him this past year and have the ability to say that you don’t know what you’re talking about. Someone’s gender has absolutely nothing to do with their coaching ability.

If someone’s gender doesn’t impact their ability to coach then one could also argue that a woman of equivalent abilities exists. And if that woman does exist, wouldn’t it be worthwhile to have ONE individual on staff who knows what it’s like to be a female student athlete?

Who is a female swimmer going to feel more comfortable talking about sexual assault, eating disorders, periods / cramps, etc with – a male or female coach?

It’s possible a female athlete may not care…but it’s also possible a male coach MIGHT not feel capable or comfortable stepping up to the plate for those issues.

When I coached a women’s only college team, the team had no problem coming to me, a male, to discuss all of their issues including the female ones you listed.

Maybe they didn’t see me as a male coach, but instead saw me as a coach they felt comfortable speaking with.

It’s not always about picking a male or a female. It should be about who do you believe will do the best job if hired for a position.

I promise you any athlete would be more than comfortable taking any issue to brien and it would be handled. It’s not that deep, he’s a great addition to any staff.

Great call Giraffe. It could also be that the current head coach has done well with a similar staff in the past. Sometimes you just know your strengths and go with it. Quality team they have down there at FIU, congrats to all involved.

I second this comment. Brien is a good coach and was obviously hired because he was the most qualified person for the job.

Are you saying that a woman shouldn’t be hired to coach an all male team if the other coaches are also women? After all who is a male college student ages 18-22 going to feel comfortable discussing sexual issues, sexual assault (one in six men are victims of sexual assault), feelings of inadequacy, mental and emotional issues etc with – a male or a female coach? That student athlete may care or he may not care, maybe a female coach will not be comfortable discussing these things with him. Or a alternate truth may exist. As young adults, part of the student-athletes experience is being forced to learn and to grow. Being put in challenging situations that will prepare them… Read more »

You make these arguments as if men haven’t been complete failures in reporting sexual assault and holding perpetrators on college campuses accountable, and female swimmers have countless other options of women-led programs- they don’t.

And your other argument is that women will be forced to deal with all-male leadership in “the real world” so they should just get used to it while in college?

Coach Horner has a sterling reputation. I also know him, you couldn’t ask for a better man to coach your daughter. The women who swim for FIU do so to gain a world class education and be part of the amazing program he runs. Student-athletes are capable of making their own choices going in what they want. If a student-athlete wants to go to a school where the program has a staff that has a different make up, fine nothing is stopping her from doing so. I love this sport, I swam, was a parent and I coached. At the end of the day it is just swimming.

The guy who wants America to institute mandatory military service also thinks it’s not important to have female coaches?

This is my surprised face.

Love when folks don’t read. I am a strong proponent of mandatory national service, pay attention here, with Civilian and, remember the and, military options. I love the part where I said it’s not important to have female coaches. Where exactly did I say that?

FIU and their head coach should have a female on staff somewhere, especially on an all female team.
Coaching a female team, the head coach should see everyday what the value of having strong and educated female(s) on deck and what they bring with them. 👍.
Hopefully the program can step up and add one more coach.

Brien’s a great guy and an incredible young coach. Well deserved and congratulations!!

Ignacio is now at Northwestern