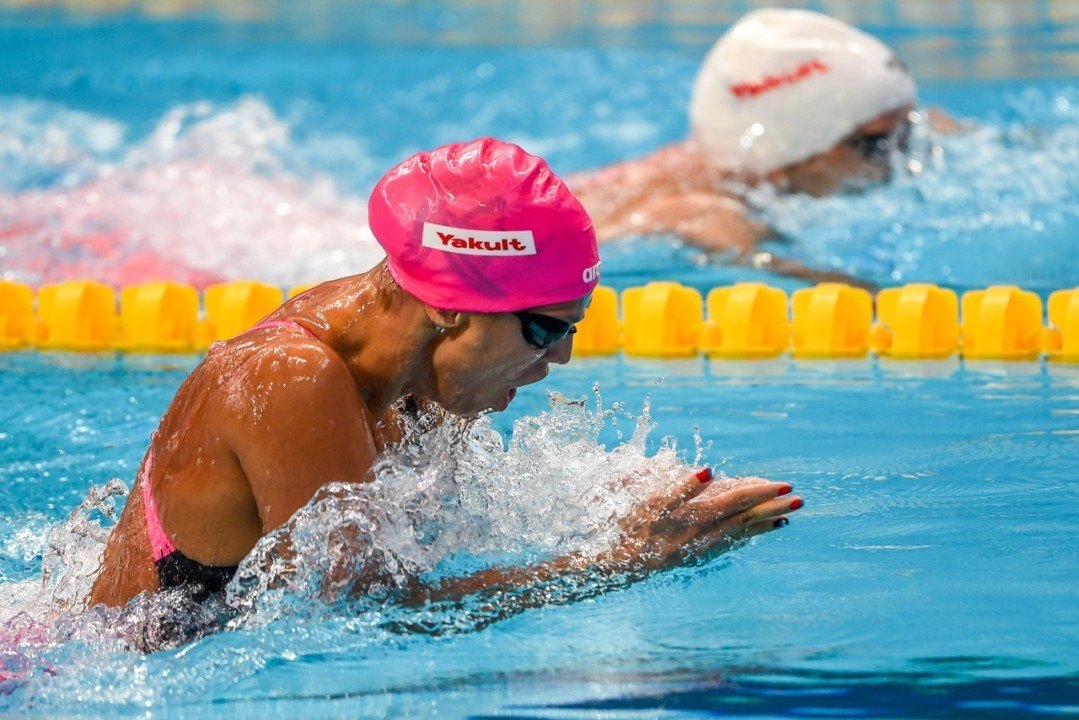 According to Russian state-owned news agency TASS, FINA has lifted the temporary suspension against Yulia Efimova. This does not mean, however,... Archive photo via Peter Sukenik/www.petersukenik.com

The recent ruling by the Swiss court means that Yang’s ban, which is active through May 28th, 2024, remains intact.

The WADA report from after the Tokyo Olympics criticized “the lack of anti-doping knowledge” of some CAS Anti-Doping Division members.

According to Russian state-owned news agency TASS, FINA has lifted the temporary suspension against Yulia Efimova. This does not mean, however, that Efimova has been cleared to swim at the 2016 Olympics. Instead, the case will bypass the FINA Doping Panel and go straight to the Court of Arbitration for Sport (CAS).

Following their protocol, FINA issued a temporary suspension upon Efimova that, aside from preventing her from competing, also did not allow her to train in any formal setting with a coach that was under the FINA umbrella.

Russian Federation president Vladimir Salnikov, himself a four-time Olympic champion, told the CAS that “Her case is not on the agenda of the [May 30 FINA Doping] Panel’s session as it went directly to CAS….They have agreed to put all materials in one file and debate the case there [in Lausanne].”

FINA had previously rejected Efimova’s request to lift the temporary suspension, which kept her from competing at this week’s European Championships. Efimova’s coach claimed that she tested positive for a small amount of meldonium, under the threshold set by WADA for an amount that could have been left in an athlete’s blood early in 2016 even if they stopped taking the substance when the ban was announced.

Editor’s Note: The TASS originally reported that Efimova’s hearing at the CAS would be May 30th. They have changed their reporting to indicate it is “to be determined.”

Come on guys. Just allow doping. It is unfair otherwise. The guys and gals that have access to new drugs have the advantage, while those that only have access to drugs the testers already know will loose. Jamaica sprinters clearly have something the testers don’t yet know. The US had something a few years ago, Marion Jones era, she won everything, as did many other US athletes, until the BACLO bust dried up their supply. Sports is a dirty business, get used to it and switch off the TV if you don’t like it!

Cheer up folks . The brother of the Brussels bomber is going to Rio for Belgium in Tae Kwon Do.

Amazing. I guess the greatest new “virtue” of Western societies is to look the other way, because we’re “just that good” lol.

Why is the brother guilty? Just because he is related? The unabombers brother is the one that tipped off the fbi.

Cornel probably took a small donation from the Russian swim federation to allow this to go to CAS. USAS needs to enact legislation barring American coaches and teams from coaching any foreign athlete who is suspended for doping.

I just hope she was able to get in some quality training during all this rubbish. I fear with all the disruption that she will not have prepared as adequately if none of this would have happened. Remember, as far as we know her levels were with the limits. Yes, she may have walked a little too close to the sun, but she will be in Rio sticking it to the World!

If she swims in Rio it will be a new low point in this sport.

Lost last bit of respect to FINA, Efimova and same to Salo if the news about allowing Efimova to train with his group again is true. Shameless athlete – doping is bad enough already, getting caught and feel so rightfully to telling people she stopped before it turns 1/1/2016 is flat out admission of intention to cheat. what else need to be done or proof before she can be banned for life?!

As for Salo, regardless of what you said your position for no supplement is, if your athlete told you they are on this drug that is not really treating any injuries or sickness, and the athlete has not respect to your word, why do you even want… Read more »

WADA has admitted its negligence .Other athletes have been un suspended so why not Efimova?

There was talk oc 4 negatives in Jan.- if so the testing lab / staff need to be examined .I ptesume this will be included in CAS

Like any court case I guess we need to.wait . The CAS was initiated to be a judge of decisions made by sports bodies . We can still have an.opinion but if we don’t agree we just have to suck it up.

USA Swimming: please do something about Dave Salo’s desire to continue to train cheaters. It reflects poorly on USA Swimming!!!!