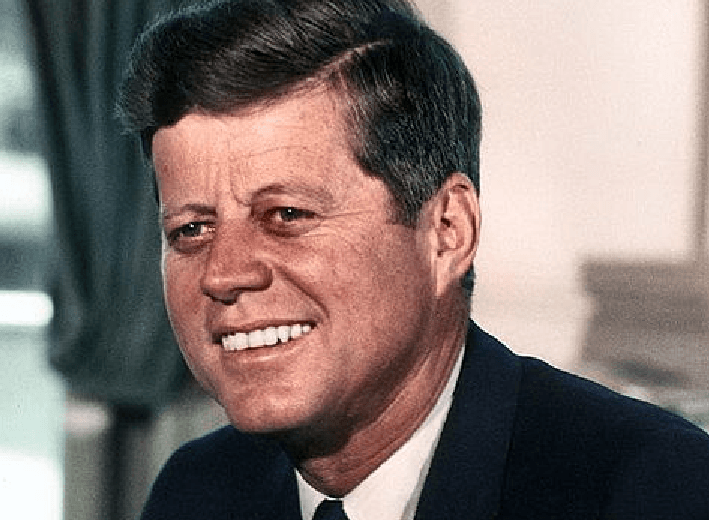 Kennedy had been a swimmer at Harvard when Kiphuth was coaching Yale. Swimming helped JFK survive WWII and become the war hero that helped launch his political career. He also swam in the White House pool almost every day to relieve his chronic bad back. Current photo via wikipedia

Earlier this week, you may have seen news clips of Barak Obama conferring the 2013 Presidential Medal of Freedom upon Oprah Winfrey and Bill Clinton, among others.

The Presidential Medal of Freedom was established by President John F. Kennedy through an Executive Order he signed in July of 1963. It was intended to be America’s highest Civilian Award, with recipients to be personally selected by the President, recognizing individuals who have made “an especially meritorious contribution to the security or national interests of the United States, world peace, cultural or other significant public or private endeavors.”

Kennedy had been a swimmer at Harvard when Kiphuth was coaching Yale. Swimming helped JFK survive WWII and become the war hero that helped launch his political career. He also swam in the White House pool almost every day to relieve his chronic bad back.

One can only imagine the conversation and the opportunity to promote swimming that might have resulted from JFK placing the Medal of Freedom around Kiphuth’s neck, had an assassin’s bullet not intervened.

In December of 1963, construction of the Swimming Hall of Fame was well under way. Both Kiphuth and JFK’s coach at Harvard, Bob Muir, were among our organization’s founding fathers. Could they have cajoled the President into attending our opening ceremonies in 1965?  Might Buck Dawson, Kiphuth, Muir, Counsilman and Haines have convinced him to become Chairman of our Board after completing his second term?   We’ll never know.

One thing we do know is that Kiphuth remains the only recipient of the Presidential  Medal  of  Freedom in  the  fifty years of its existence to be recognized for his contributions to swimming.

The International Swimming Hall of Fame is a not-for-profit educational organization located in Fort Lauderdale, Florida. Our mission is to promote the benefits and importance of swimming as a key to fitness, good health, quality of life, and the water safety of children. We will accomplish this through operation of the International Swimming Hall of Fame, a dynamic shrine dedicated to the history, memory, and recognition of the famous swimmers, divers, water polo players, synchronized swimmers, and persons involved in life saving activities and education, throughout the world, whose lives and accomplishments will serve to inspire, educate, and be role models for all those who participate in the Hall of Fame’s experience and programs.

Bruce Wigo was named President and CEO of ISHOF on Friday the 13th of May, 2005.  He is lawyer who has had success in turning around financially troubled non-profit businesses. In 1991, he took over as the Executive Director of USA Water Polo and helped bail out the nearly bankrupt sport’s federation.  In his thirteen years as ED, he increased membership from less than 8,000 to more than 30,000, more than tripled the annual budget to over $3.5 million and raised over $1.5 million for the establishment of a water polo national training center in Los Alamitos, CA.  His oldest son, Wolf Wigo, is a three time Olympian, is currently the head water polo coach at the University of California at Santa Barbara. Daughter Lauren is the corporate yoga instructor for Allen & Company in New York City and his two younger sons, identical twins Drac and Janson, are NCAA All-American water polo players at Stanford University.

You can support the International Swimming Hall of Fame at this link.

I did a little checking. Based on when JFK was born (1917), Bob Muir would have coached him during his freshman year at Harvard (1935-6 presumably), which coincided with Muir’s last year at Harvard.

There appears to be a discrepancy in dates. According to Wikipedia, JFK spend much of 1935 in the hospital and enrolled as a freshman at Harvard in September of 1936. In our files at the ISHOF, Bob Muir says he coached JFK on the Freshman team at Harvard, but also that he began coaching Williams in 1936. Perhaps the freshman swim season ended at the Christmas break. The dates on the image of JFK in his swim suit were published on the cover of the American Swimmer Magazine of December 1963.