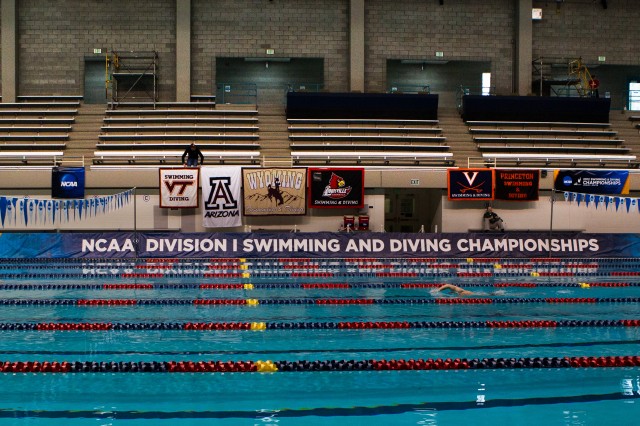 The King County Aquatic Center didn't draw great crowds for NCAA's in 2012, but USA Swimming hopes it will do better in the winter. photo via Tim Binning/TheSwimPictures.com

Federal Way, Washington and the King County Aquatic Center has been named as the host of the 2014 Winter Junior Nationals and 2015 USA Swimming Winter National Championships, according to Lyle Campbell, who is a hall-of-famer in the relevant LSC and their current SWIMS Chairman. The first of those meets, in 2014 will be held in December in a yards course. 2015 is expected to again be in long course, as it immediately precedes the Olympics (though that wasn’t immediately confirmed). The outcome was announced at the LSC board meeting on Monday night.

We have not learned yet the location of the 2015 Winter Junior National Championships, which would then likely be the senior Winter Nationals host in 2016, and so on.

The huge venue, which is with little debate considered the finest in the northwestern United States, if not the entire west coast, seats 2,500 spectators. Because of its quality and location, the pool features easily one of the biggest meet schedules in the country, and has to be considered the best facility in the country not connected directly to any NCAA programs.

The pool routinely hosts the Pac 12 Championships, and in 2012 hosted the men’s NCAA Division I Championship meet.

It’s definitely possible to swim very fast in this pool!

This pool is horrible. Terrible air quality with mediocre swims (in terms of American/world/NCAA records).

You’ve got to be kidding. Either that or you don’t know what your talking about or have any facts to back it up. People in the know have consistently rated KCAC in the top five venues in America.

“people in the know”? seriously? who are these people?

The pool is not fast. Because Missy swam well there at one meet in a super suit dosent make it fast. I want to see what World/American/US Open records were set in the pool besides Jendrik? Jrs should be hosted at Aand M, UT, TN, Indi.,MN…list goes on and on.

MANY coaches and swimmers across the country agree that the air quality is atrocious and has been for years, not to mention the antiquated blocks (that were subsequently taken out for NCAA’s, and then put back in after), and odd open ended bulkhead.

Sorry but in 2010, a young Missy swam the times I have mentioned below in a normal suit.

I guess a pool that owns World, US Open, American and NCAA records isn’t fastest enough for a great swimmer like you. BTW, WKCAC is undergoing an air quality upgrade. We already experienced improvements this summer. With another $1 Million+ of upgrades coming this year, it will undoubtedly have the best air quality of any indoor venue in the Country.

fast swimming this meet. air quality was decent, but far from the “best air quality in the country.” my daughter was coughing most of the weekend and I still have a headache from being in there for three days. I thought they put in that evacuator thing?! didn’t seem like it.

David Nolan just sent an American record in the pool last night so it seems to have been fast as of late.