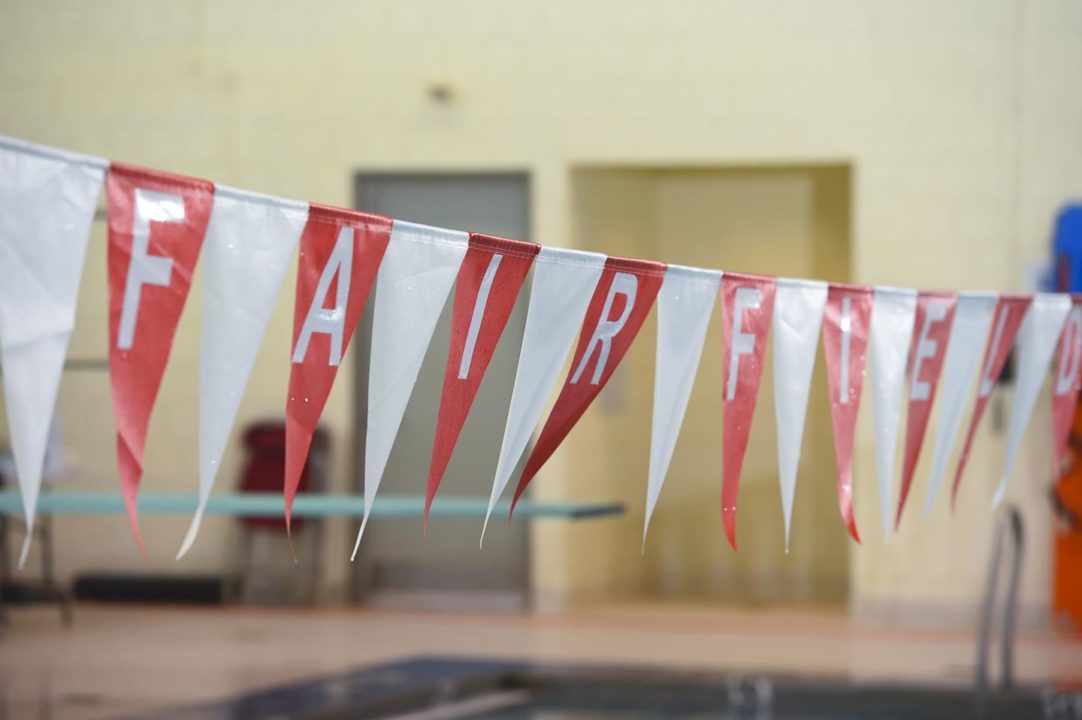 “Today was a great way to start off the season against strong competition,” said Head Coach Anthony Bruno. “We use this meet as a way to see where we are at after the first month. This year’s group may be one of the most talented in the history of the program. We’re ready to move into the next part of the Fall.”

The Stags head to Chestnut Hill next weekend to compete in the New England Catholic Invitational beginning Friday, October 4 hosted by Boston College.

The Central Connecticut women’s swimming and diving team opened the 2019-20 season with a strong showing at the Fairfield Invite on Saturday.  In swimming action (the Blue Devils did not dive on Saturday), Central posted a first place finish with 490 points, 89 points ahead of second place Fairfield.  Sacred Heart was third with 396 points, followed by Pace (112) and Southern Connecticut (86).

The Blue Devils opened the Invite with a third place finish in the 200 Medley Relay.  The team of sophomore Katie Czulewicz, sophomore Mariana Espino, junior Katelyn Mann and sophomore Simona Visinski finished with a time of 2:05.37 to earn 32 points.  The team of junior Erin Brown, sophomore Alex Lindgren, freshman Kaylin McMahon and sophomore Destiny Johnson placed fifth in 2:07.83 and earned an additional 28 points in the race.

FAIRFIELD, Conn.- The Sacred Heart University Swimming and Diving team took second place at the Fairfield Invite this morning to kick-off the 2019 season. The Pioneers will return to action on Saturday, October 12 when SHU competes at Central Connecticut State.

FAIRFIELD, Conn. – The Southern Connecticut State University men’s swimming & diving team finished second out of three teams at the Fairfield Invitational, placing ahead of NE10 opponent Pace by a score of 342-294.

UP NEXT
Southern is back in action when they travel to UConn on Saturday, Oct. 5.

FAIRFIELD, Conn. – Seeing their first action of the 2019-20 season, the Pace University men’s and women’s swimming and diving teams competed on Saturday at the Fairfield Invitational.

Women’s Recap (4th Place)
Leigha Kosakowski’s (Selkirk, N.Y./Bethlehem Central) sixth-place finish in the 50-free led the way for the Setters. The junior raced to a time of 28.66 in the event.

Junior Annabel Keppel-Palmer (Kent, England/Maidstone Grammar School) put together a strong event of her own in the 200-back, posting an eighth-place effort in the 200-back (2:32.60).

On the diving front, sophomore Amy Calandro (Eastchester, N.Y./Eastchester) finished sixth in the one-meter (150.15) and fifth in the three-meter (181.87)

Classmate Filip Turecky (State College, Pa./State College Area) also put forth strong results in Pace’s opener. The Pennsylvania native placed second in the 200-back with a time of 2:17.62, while also finishing third in the 100-back (1:02.24).

In diving action, Patrick Dwyer (Tomkins Cove, N.Y./North Rockland) was terrific in his first meet of the season. The sophomore’s mark of 244.2 in the one-meter produced a second-place finish while a 187.65 in the three-meter put him third.

Up Next
The Setters will have close to a month off before competing again. Pace’s home debut will take place on Oct. 25 against Queensborough.