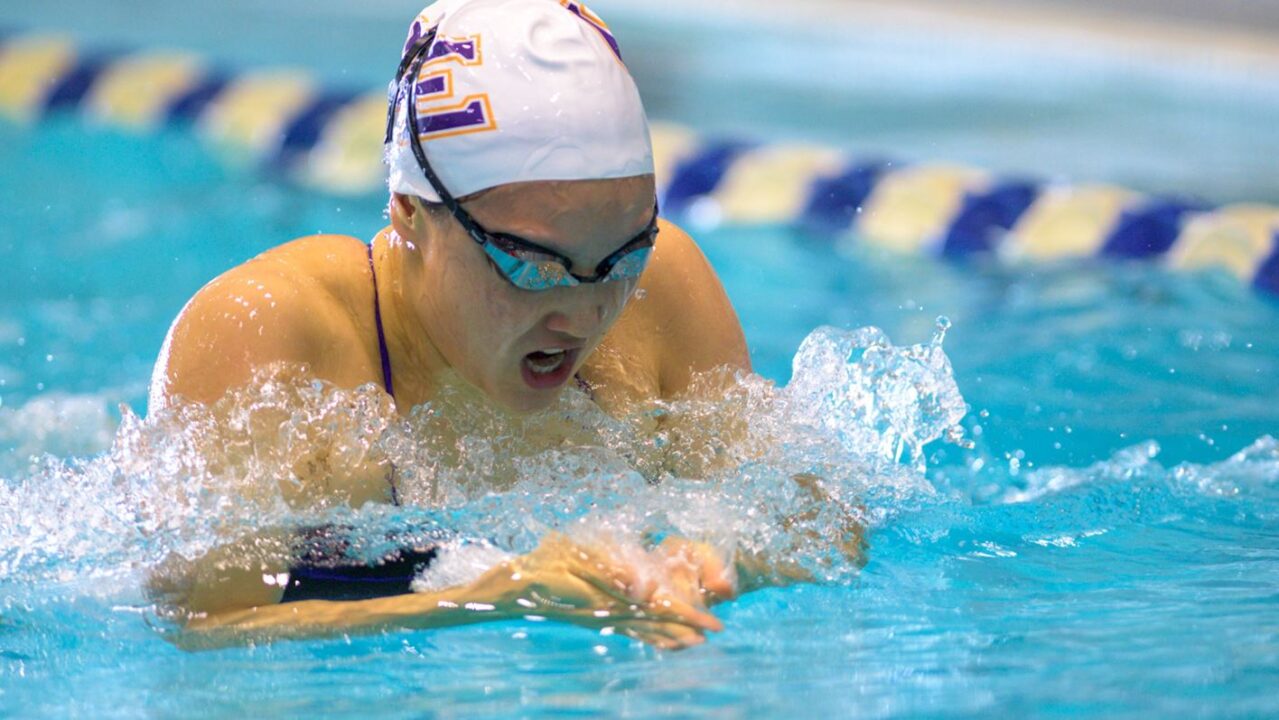 In a tri-meet on Saturday, Evansville held off St. Louis and Little Rock in the brand-new Deaconess Aquatic Center at home. Stock photo via Ken Metz

EVANSVILLE, Ind. – The first-ever swim meet at the Deaconess Aquatic Center will go down in Evansville city history as an impressive one for the hometown University of Evansville swimming and diving teams, as the Purple Aces swept its triangular meet with the visiting Saint Louis University Billikens and University of Arkansas-Little Rock Trojans.

“I thought we got a great effort all the way around today,” said UE swimming and diving head coach Stuart Wilson.  “Everyone on both teams contributed to the team effort.

“I really want to thank our seniors for making the sacrifices and commitment to represent UE over the last four years.  A new chapter in their life will be coming soon, and they will take their lifelong experiences in swimming to their new adventures.”

On the women’s side, junior Sage Moore (Lexington, Ohio/Lexington) and freshman Sveva Brugnoli (Rome, Italy) helped power the Purple Aces to a sweep of the triangular meet.  Moore swept the 100- and 200-yard breaststroke events in times of 1:08.47 and 2:25.34, respectively.  Meanwhile, Brugnoli cruised to victories in both the 100- and 200-yard butterfly events in times of 56.94 and 2:08.64.  Her time of 56.94 in the 100 fly is a season-best mark, and ranks her as the eighth-fastest swimmer in UE history in the event.

In UE’s “Senior Day” meet, senior Zeke Metz (Topeka, Kan./Seaman) helped the Purple Aces hold off the Billikens on the men’s side, as Metz won the men’s 200-yard IM event, the second-to-last event of the day, in a time of 1:56.66 to win by two seconds over freshman teammate Carlos Souto Vilas (A Coruna, Spain).  It was Metz’s second individual title of the day, as he also won the men’s 200-yard freestyle in a time of 1:44.77.

Then, with the meet hanging in the balance, the quartet of freshmen Daniel Santos Lopez (Madrid, Spain) and Jakob Grundbacher (Long Beach, Calif.), senior Josh Graves (Topeka, Kan./Seaman) and junior Riccardo Di Domenico (Johannesburg, South Africa) posted a time of 1:25.38 to win the men’s 200-yard freestyle relay and ice the victory for UE.  Santos Lopez, Di Domenico and Grundbacher had teamed with sophomore Alon Baer (Gesher Haziv, Israel) earlier in the meet to make Evansville history, as they recorded UE’s first event victory at the Deaconess Aquatic Center in the 200 Medley Relay.

Evansville will return to the pool next weekend, as UE travels to Carbondale, Illinois to take part in the Southern Illinois Invitational, before beginning its winter training period.

EVANSVILLE, Ind. – The Little Rock swimming team took down Atlantic-10 foes St. Louis and was just within reach of conference opponents Evansville on Saturday, besting the Billikens 152-140 but falling to the Aces 153.5-135.5.

The Trojans won three individual events and swept the relays, all going down as pool records due to the meet being held at the brand-new Deaconess Aquatic Center. Little Rock also posted 17 new season-best times throughout the meet, 32% of all swims.

“The fight this team had was unmatched,” said head coach Amy Burgess. “Everyone came into the meet ready to race, and race they did. We out-swam every team, and I cannot wait to see the show they put on next at the Kansas Classic!”

Relays
Little Rock started off the meet strong, with the team of Olivia Henderson, Annya Grom, Asmalia Redzuan and Jaelle Carlson winning the 200 medley relay by less than three tenths over Evansville for a season-best time of 1:46.33. Grom, Redzuan, and Carlson each posted the fastest splits in their respective stroke legs in the event.

The Trojans closed off the meet with a bang. Grom, sophomores Cheryl Poulsen and Aubry Matthews, and Carlson dominated the competition by over two seconds in the 200 freestyle relay, stopping the clock at 1:36.59. This relay is easily the strongest of the five for Little Rock, currently ranking third in the Missouri Valley Conference.

Freestyle Highlights
The sprint events continue to be the highlight of the Little Rock program this year. Grom won the 50 free with a time of 24.45, followed closely behind by Matthews and Poulsen. The sophomore duo finished exactly one one-hundredths apart from each other, with times of 24.78 and 24.79 for third and fourth place, respectively.

Carlson flexed her prowess in the 100 free, finishing at 51.85, the only swimmer under 53 seconds. Graduate student Lauren Gray added to the depth of the squad with a third-place finish, coming in at 54.10.

Lea Zengerling continues to be the face of Little Rock’s mid-distance events. The senior had a weekend of season-bests, claiming second place in the 500 with a time drop of four seconds from her previous race, down to 5:11.91.

She also shaved off over a second for a new season-best time in the 200 freestyle, placing third at 1:56.94. Redzuan touched the wall in fourth in the race with a time of 1:58.81, beating out the first Evansville swimmer by a few hundredths of a second.

Lara Alsader also had an impressive time drop in the longest event of the day, the 1000. The freshman came in at 10:53.79, chopping off over 20 seconds from her swim a month ago.

Butterfly Highlights
The sprint freestylers also have a knack for sprint butterfly. Grom, Carlson, and Gray each scored points in the 100 fly, with Grom leading the group with a time of 57.65 for second place, dropping over a second from her previous mark from this year. Carlson touched third at 58.03, while Gray tied for fifth at 59.95.

Backstroke Highlights
Caitlin Romprey had a breakout meet for the Trojans. The freshman secured first place in the 200 backstroke, dropping two and a half seconds from her latest swim in the event for a winning time of 2:06.57, nearly two seconds ahead of second place. Earlier in the meet, she took silver in the 100 back with a new season-best time of 58.99, almost beating out the first place finisher thanks to Romprey’s stellar back half.

She was supported by classmate Henderson, who stopped the clock at 59.74 in the 100 for fourth place and 2:10.47 in the 200, showcasing her consistency in time from meet to meet.

Breaststroke Highlights
A pair of sophomore breaststrokers came away with a third-place finish each. Lexie Shelton was the top Trojan in the 200 breaststroke, dropping nearly three seconds off of her previous mark to earn a new season-best time of 2:28.74.

Karina Harr continues to be a mainstay in the 100 breaststroke for Little Rock, taking third with a time of 1:09.14. Carolyn Godwin also scored points, posting a time of 1:10.37 for fifth. Later in the meet, the senior took off over a second in her 200 IM as the fastest Trojan, placing fourth at 2:14.40.

Up Next
Little Rock will have the next two weeks to prepare for their mid-season meet, hosted by Kansas from Nov. 19-21. View the full Trojan schedule here.

Up next for the Billikens is the Phoenix Fall Classic Nov. 19-21 in Chicago.