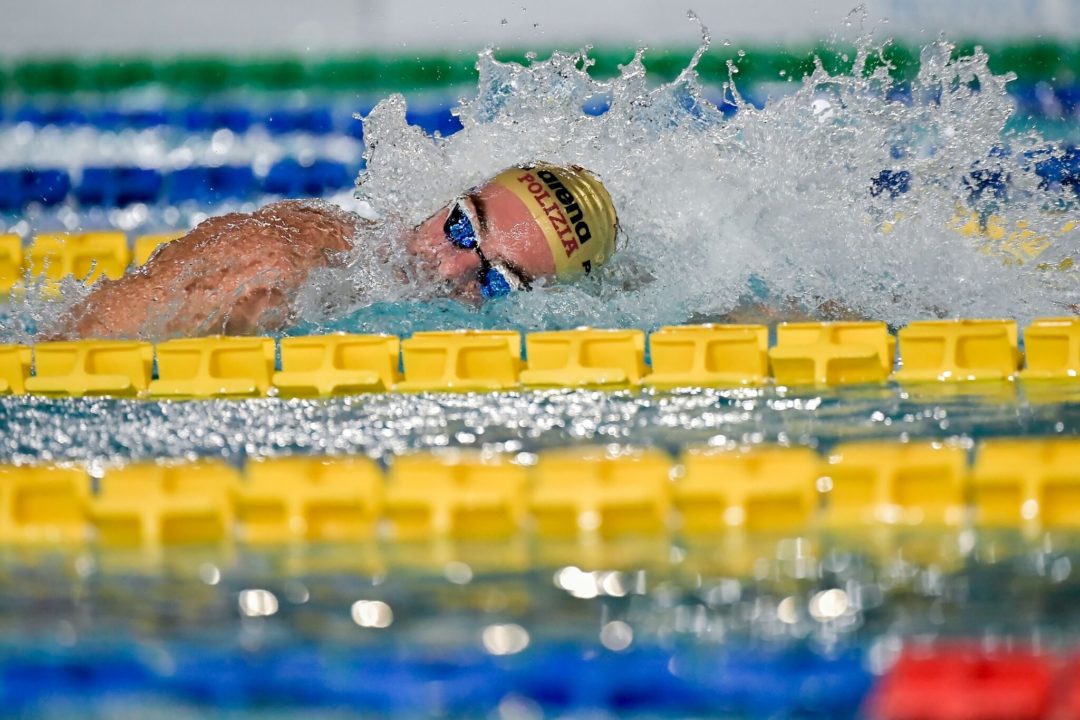 Gregorio Paltrinieri won his first world title in the 1500m freestyle at the 2015 World Championships in Kazan, Russia, in a final that was without Sun Yang. Archive photo via La Presse

The men’s 1500m freestyle was one of the most intriguing races at the 2015 World Championships in Kazan, Russia. This was in part due to the sudden withdrawal of China’s Sun Yang from the final. As the two-time two-time defending world champion in the 1500, Sun was the heavy favorite to win. After suffering what he called heart problems, though, and skipping the final, the event became wide-open. He had qualified as the third seed out of the heats, behind the USA’s Connor Jaeger.

Italy’s Gregorio Paltrinieri entered the meet as a potential challenger to Sun’s quest for a three-peat, but Sun’s absence eliminated a battle between the two of them.

Due to the suddenness of Sun’s withdrawal, there were just seven swimmers in the final.

Paltrinieri qualified first out of the heats. However, it was Canada’s Ryan Cochrane who set the tone at the start of the final, going out under world record pace.

Cochrane led for a third of the race, but Paltrinieri began to catch up to him, taking over the lead at 500 meters. He continued to build his lead over the next 500, while Jaeger overtook Cochrane for the second position.

This win marked Paltrinieri’s first-ever world title. He went on to win the 1500 again at both the 2016 Olympics in Rio and the 2017 World Championships in Budapest.

Paltrinieri makes watching the 1500 fun, he is not just fast but smart too and balances his weakness well.

he was amazing in Budapest at the World Juniors, almost flawless, if he swam the 400, he would have won it too. The kid will break the World Record, it’s just a mater of when

Agree wholeheartedly there are a number of juniors coming through that may rattle the WR in a few years but I think it will be Tom Neill from Australia that will stand above all in the moment. Super young man with a massive amount of talent, destined for greatness.

But he is 14 seconds behind Grgic

Sam, huge physical and developmental differences can highlight significant time differences in junior swimmers but when all growing is sorted it comes back to racing and the Aussie is an out and out racer, so much fun to watch his progression over the years but the instinct Tom has toward his racing is a big plus in his favour. No doubting Grgic’s ability one little bit however, just biased toward the Aussie 😉.