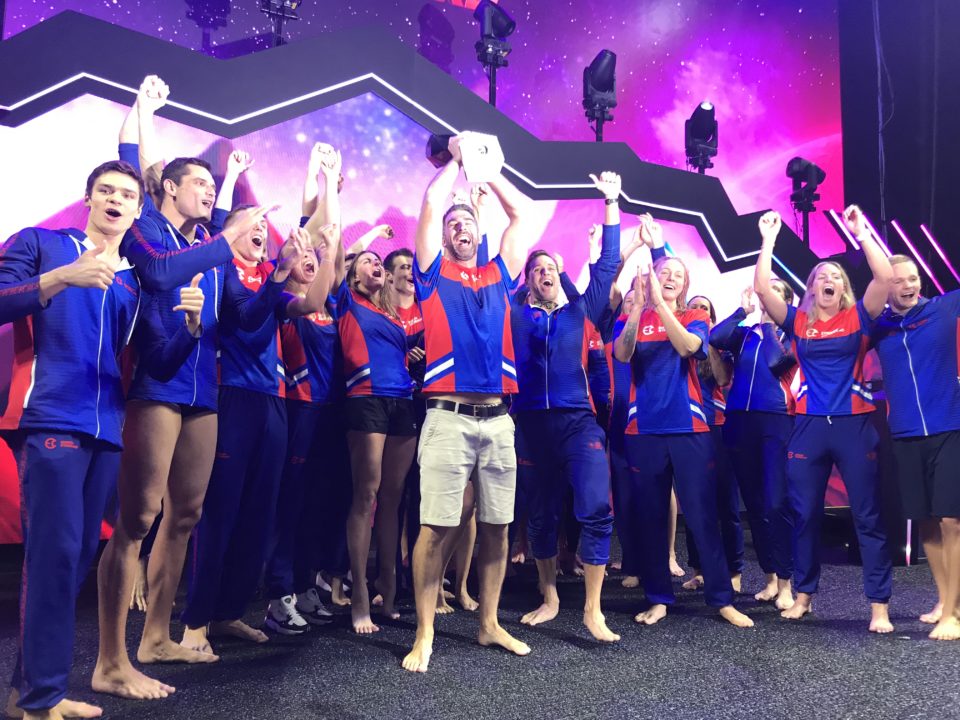 Energy Standard head coach James Gibson says that season two of the ISL (which will feature 27 meets) is "only the start, not the end".

After being crowned champions of the inaugural International Swimming League this weekend, Energy Standard has a lot of positives to take away from this ISL season. The elite team is lead by head coach James Gibson, who has been in the position since 2016.

Ahead of the finale in Las Vegas this weekend, Gibson said, “It’s hugely unpredictable. The fact that all the matches are pretty much coming down to the skins races at the end; it just shows how entertaining it is”. And sure enough, that’s exactly what happened.

London Roar were leading by 22.5 points ahead of the skins races today, but stellar performances from Energy Standard’s Sarah Sjostrom and Florent Manaudou (who finished 1st and 2nd in the skins, respectively) secured a win for their team.

As the debut ISL season came to a close, Founder Konstantin Grigorishin announced plans for next season, which is set to include 27 meets. Speaking about this Gibson said, “The way that the ISL has been set up this year has been respectful of the swimmers’ international calendars, running from September to December so there’s no clash”.

“As of next year, the Olympics is done in August and the ISL will run from September through to April. When you’re trying to create a league, that’s a league. It’s 27 matches but each club will only race 10 times which is well within the realms of capability of all of the swimmers involved”.

“The league moving to 27 meets is only the start, not the end. Everyone knows the product is great and it works. The show is amazing; it’s starting a new journey for the athletes, something visionary that has never been done before. Now we’ve finally found a show that can actually deliver something to the mass media, so we need to show the world how good this product is”.

I’d like to see them play around with the format a little bit so we don’t just get 27 meets of 4 teams. I think it would be much more interesting if we were to have meets with 2 or 3 or even 5 teams as it would make things a little different.

Do the team’s change each year or stay the same?

I think most of the Americans and Europeans will probably stay with the teams they have been with this season. But, I think we will see a fair few Australians moving to the Tokyo team and Canadians moving to the Toronto team.
Another thing to think about would be retirements which would open up spaces for new athletes to come in.
I also wouldn’t be too surprised to see roster size being expanded so swimmers don’t have to go to every meet.

Roar is managed by an Aussie (Rob Woodhouse who’s also McKeon’s uncle) so I wouldn’t be so confident the Aussies at Roar will jump ship to Tokyo.