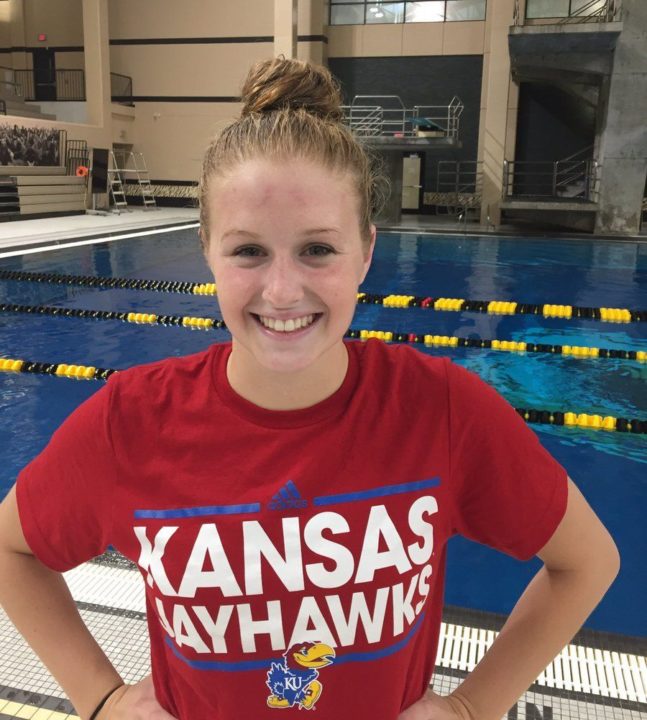 Columbia Swim Club sent a congratulatory tweet to their swimmer Ellie Flanagan, who verbally committed to swim for University of Kansas on Friday.

Flanagan is a senior at Rock Bridge High School in Columbia, Missouri. At the 2016 MSHSAA Girls State Swimming Championship last February, she finished third in the 100 fly (56.93), fourth in the 500 free (5:07.47), split a 25.50 fly leg on the state-champion medley relay, and went 53.78 on the second leg of the 400 free relay. She also swims for Columbia Swim Club, and had a strong long-course season, earning personal-best times in ten events. She competed in both the 200 breast and 200 fly at Speedo Junior Nationals, then went on to notch a best time in the 200 IM in time trials. Flanagan was a top-eight finisher in both the 200 fly and 400 IM at Columbia Sectionals in July, and in the 200 breast, 200 fly, and 400 IM at Jenks Sectionals in March.

Her top times include:

Flanagan will be an immediate-impact player for KU. Her 200 fly time would have scored in the A final at 2016 BIG Championships, her 200 breast and 100 fly would have made the B final, and her 100 breast time would have been right on the B/C-final bubble.

Flanagan is a two-time member of the USA Swimming Scholastic All-America Team.