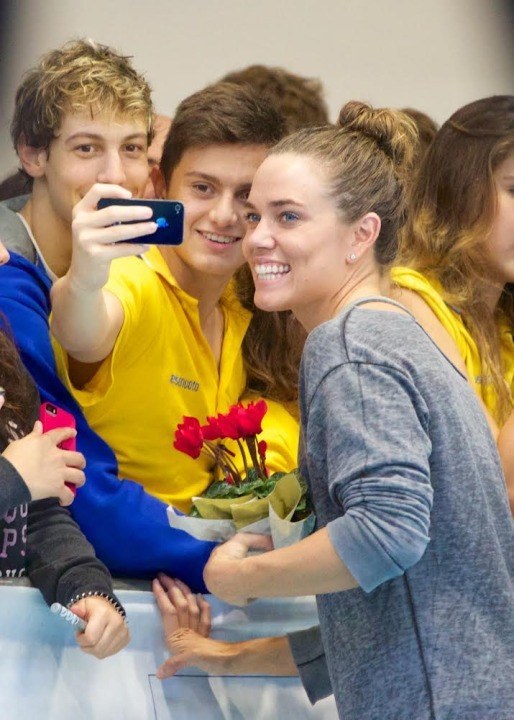 Natalie Coughlin had great success on her last European trip to the Bolzano meet in Italy. She'll hope to do it again in March. Current photo via Rafael Domeyko, rafaeldomeyko.com

With just 12 days to go before the entries close on February 16th, the 2014 Edinburgh International Swim Meet (March 13th-15th) has gotten even more juice than previously announced with entries from 6 new international stars.

In addition to the 20 British and Irish National Team swimmers previously announced, 6 new names threw their hats into the ring this week, including three American National Champions from the Cal Aquatics group:

This adds several intriguing new matchups to the competition at the Royal Commonwealth Pool.

Fabio Scozzoli and Giacomo Perez D0rtona are each their respective country’s best breaststrokers and should be in contention for individual Olympic finals spots in the 100. They join a lineup that already includes the explosive newly-found British breaststroke group with names like Adam Peaty and Ross Murdoch to put some extra weight into the final.

Natalie Coughlin should match up well in the sprint events against Britain’s Fran Halsall, previously announced. Anthony Ervin and Tom Shields should each also get a crack at their respective counterparts in the sprint free and fly events that are the best in Britain – Ben Proud and Adam Barrett.

For the American swimmers, this is a standard pattern. They’re based at Cal, where in March their coach Dave Durden will be honed-in on the upcoming NCAA Championships. Post-grad groups affiliated with colleges often use this time to travel to meets abroad and gain some separation from their tapering pool-mates.

To see more, buy tickets, or register for the meet, check out the SwimScotland website here.