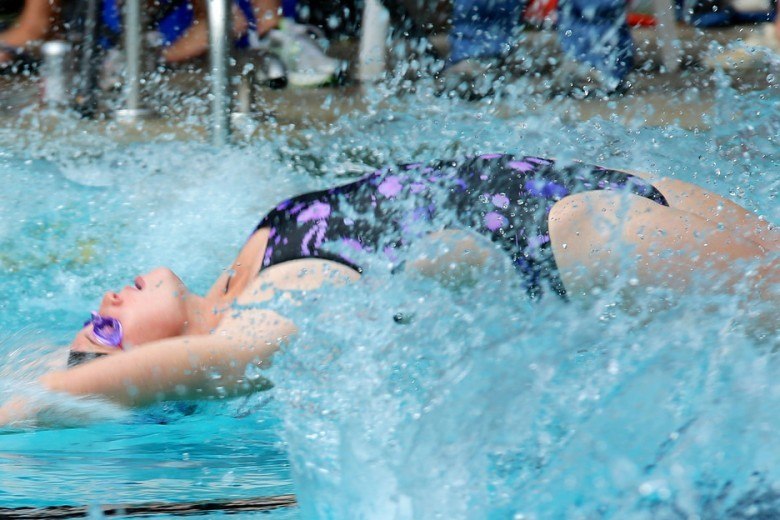 Eastern Michigan beat Division-III Denison at home to get back above .500 on the season. Stock photo via Lester Rich/SwimTeamPics.com

GRANVILLE, Ohio (EMUEagles.com)—Eastern Michigan University’s men’s swimming and diving returned to dual action against Denison University Friday, Jan. 10, and came out the victor in the afternoon tilt against the Big Red.  The 184-116 win boosts the Green and White to a record of 2-1 (1-0 MAC).

The Eagles won 10-of-16 events during the course of the meet, beginning with the first four events of the afternoon.  To kick off the matchup against Denison, the 200 medley relay team of Cole Bateman (Hutchinson, Minnn.-Hutchinson), Kyle Aerne (Lake Villa, Ill.-Lakes Community), Krzysztof Gilski (Dywity, Poland-Adam Mickiewicz State Secondary), and Dexter Foos (Fremont, Ohio-Fremont-Ross) hit the water to take the race in 1:32.80.

Following the opening relay, Kyle Lichtenberg (Clarkston, Mich.-Home School) swam a 9:37.10 in the 1000 free for another Eagle victory.  Franco Petrone (Etobicoke, Ontario-Silverthorne Collegiate Institute) claimed the second-place spot in 9:40.23.  The Green and White earned another 1-2 finish after Andrew Henry (Garner, N.C.-West Johnston)and Brian Moore (Anthem, Ariz.-Boulder Creek) touched in at 1:40.46 and 1:41.10, respectively in the 200 free.

The fourth victory would come from Bateman, who won the 100 back.  The freshman was one-of-three Eagles that won multiple individual events, as he later claimed a victory in the 200 back.  Lichtenberg followed up with a win in the 500 free for his second title, beating out Petrone by a mere .04 seconds for a 4:40.01 finish.  Gilski continued to control the butterfly events, as the sophomore won the 100 fly in 50.06 and the 200 fly with a 1:51.89 mark.

Mike Fisher (Saline, Mich.-Saline) rounded out the individual victories, as he won the 200 breast in 2:06.77. The Eagles ended the meet with their 10th first-place finish, as the 400 free relay team of Erik Gissen (Karlstad, Sweden-Alvkullegymnasiet), Foos, Gus Everson (Sandusky, Ohio-Sandusky), and Moore finished their final event in 3:04.23.

The Green and White will return to Jones Natatorium Saturday, Jan. 18, when the squad will face Michigan State University and the University at Buffalo.  The meet is slated to begin at 1 p.m. and live results can be accessed through EMUEagles.com.

GRANVILLE, Ohio (EMUEagles.com)—Eastern Michigan University’s women’s swimming and diving team bounced back from a fifth-place finish in the Florida International University Invitational with a dual victory over Denison University, Friday, Jan. 10.  The Eagles maintained a lead throughout the meet and ended the afternoon with a 181-118 finish against the Big Red.  With the win, the Eagles improve to 4-3 (2-1 MAC).

Mitcheltree and Swartz each picked up a victory in individual events.  Mitcheltree claimed a winning time of 59.12 in the 100 back, while Swartz won the 100 fly in 57.17.  The 100 fly was also a 1-2-3 sweep by the Eagles, as Meghan Richardson (Midland-Mich.-Herbert Henry Dow) and Carly Jackson (La Porte, Ind.-La Porte) touched in shortly after the senior swimmer.

Junior Jessie Godlewski (Apex, N.C.-Apex) claimed three victories for the Eagles, taking home titles in the 200 fly, 200 back, and 200 IM.  She and classmate Monica Dorszewski (Palatine, Ill.-Palatine) were the only athletes to claim victories in multiple individual events, as Dorszewski dominated the breaststroke events by finishing the 100 breast with a 1:05.69 mark and the 200 breast in 2:21.53.

Rookie swimmer Grace Van Allen (Indianapolis, Ind.-North Central) grabbed the final first-place finish in between the lane lines, as she notched a 1:54.15 finish in the 200 freestyle.

The Eagles were equally successful on the springboards, as Lauren Dark (Chelsea, Mich-Chelsea) scored a 269.25 in the 1-meter dive to win the event, while Danielle Hulvey(Pickerington, Ohio-Central) won the 3-meter event with a score of 306.23.

Jones Natatorium will be the Eagles’ next venue, as the squad hosts Michigan State University and the University at Buffalo in a Big Ten/Mid-American Conference combination matchup, Saturday, Jan. 18.  The meet is scheduled to begin at 1 p.m. and live stats will be available through EMUEagles.com.