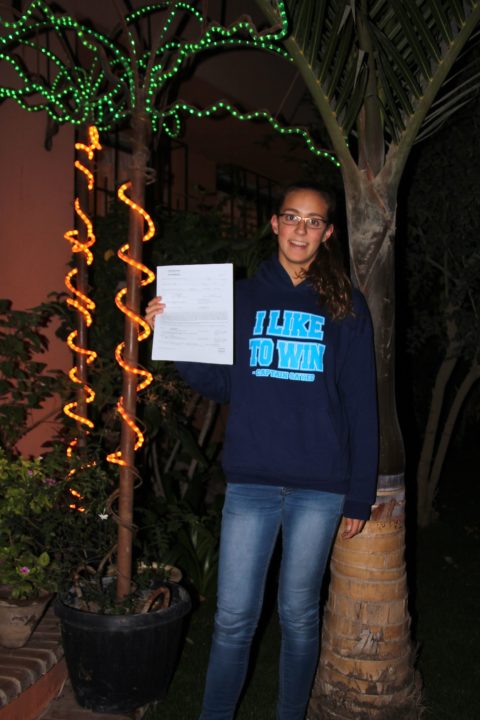 Dutch swimmer Dorien Butter, by way of Egypt, has signed her letter to swim for the Utah Utes. Current photo via Dorien Butter

Dorien Butter, a Dutch swimmer who lives in Egypt, has signed her National Letter of Intent to swim at the University of Utah.

The 17-year old Butter is not a total stranger to the United States either; in 2012, she swam at the Georgia Senior Championships unattached; she also raced at this year’s World Cup stop in Eindhoven.

Those times convert to around 23.5 and 50.8 in yards. Combined with incoming Montanan Jenna Marsh, who previously verbally committed, the Utes’ sprint group is starting to look much better, and deeper especially, in the coming seasons. Either of those swimmers, even without much improvement, should immediately step into Utah’s free relays.

Butter’s story is pretty unique. She’s Dutch, but she’s never actually lived in the Netherlands because of her father’s work. She was born in Oman, and has lived in 6 different countries; she didn’t start swimming competitively in Egypt until the end of the 9th grade. She said that it’s been a little tough to keep a ‘constant swim schedule’ with curfews and evacuations, but that she trains with a good local team.

I cannot begin to describe how happy this makes me…it would take many years and many keystrokes upon the screen to collect the full body of my thoughts concerning yet another DutchWoman coming to swim here in the states. And she’s tall…of course, as if anyone were in doubt. The average white American female is 5’5”…the average DutchWoman is 5’7”.

That is awesome Dorien and more so as you have moved round countries where it is not so easy to have scheduled practices, full time coaches and good training facilities. ACST TUNISIA is proud to have you as an alumni. We were elated to hear this news and good luck in Utah.