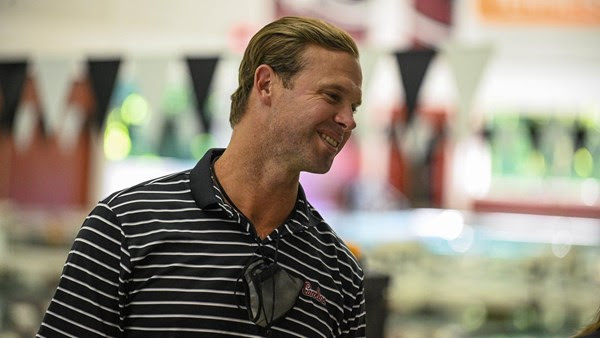 Sherrard coached the Florida Southern College Mocs from 2009-2015, where he became the most decorated FSC swim coach to date. Current photo via South Carolina Athletics

“I’m honored and humbled to have received this award,” said Sherrard. “It could not have been done without the help of Athletics Director Pete Meyer, my assistant coaches, and the student-athletes. Those years at Florida Southern College were the fourndation of my coaching career and helped me develop a lot of my philosophies.”

While at Florida Southern, Sherrard was four-time conference coach of the year. His student-athletes achieved 203 All-America performances, and he had a top-15 NCAA finish in each year of his tenure.

Seven of Sherrard’s former student-athletes were also named to the conference’s All-Decade teams.

Sherrard joined the staff at South Carolina in May 2021 after making stops at North Carolina and Auburn.

He helped elevate the whole conference upon arrival. Hell of a rival, but an even better colleague and friend!