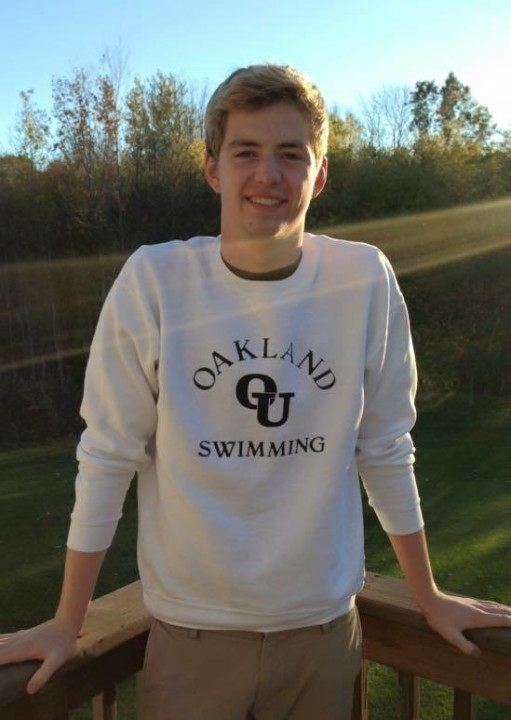 Zeeland, Michigan water polo and swimming standout Micah DeJonge has given a verbal commitment to the Golden Grizzlies for 2016-17. Current photo via Morgan Bullock

Zeeland East High School (Zeeland, Michigan) senior Micah DeJonge has made a verbal commitment to swim for Oakland University next year. DeJonge is a second generation Golden Grizzlie; his mother, Nancy Sall, graduated from Oakland. DeJonge has had a stellar career at Zeeland East in both water polo and swimming. DeJonge was named The Holland Sentinel Boys Co-Water Polo Player of the Year after his junior season, one that included 77 goals, 43 assists and 94 steals. That same year he placed fourth in both the 200 and 500 freestyles at the 2015 MHSAA D1 Boys Swim and Dive Championships and anchored Zeeland’s 200 and 400 free relays.

DeJonge swims club for West Michigan Swimmers. He is a Winter Juniors qualifier in every freestyle distance from the 200 to the 1650/1500, in both long course and short course. His best times include:

Had DeJonge swum his best 1650 at 2015 Horizon League Championships, he would have placed fourth, a mere .05 behind then-freshman Seth Timmons of Oakland. Jacob Pearson, now a junior, was six seconds behind. DeJonge would have been sixth in the 1000 (Timmons won it), and second in the 500, .32 ahead of Oakland’s highest scorer in the event, then-junior Jorden Merrilees.

DeJonge will reinforce the already solid Golden Grizzlies distance group which grew one stronger with the addition of incoming freshman Ben VanderWeide this year.

This is a younger brother of the other DeJonge’s who swam at Michigan.

sorry but not related