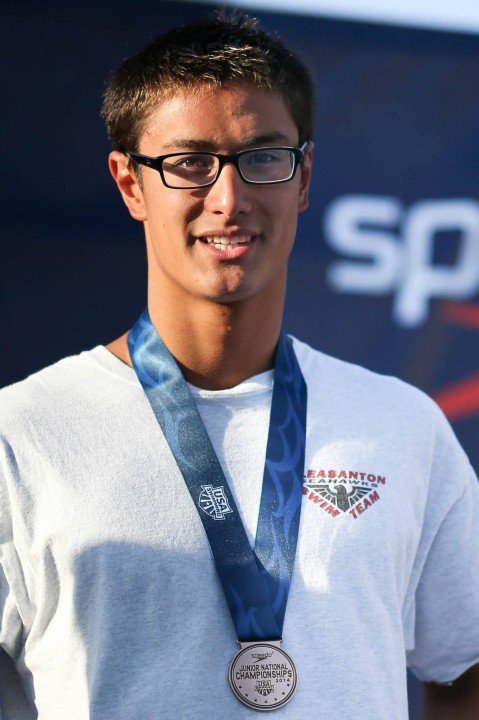 Maxime Rooney, the Junior Nationals runner-up in the 200 free, intends to swim for the United States internationally if he earns the right to do so. He's a dual citizen of the U.S. and the Philippines. Current photo via Tim Binning/TheSwimPictures.com

16-year old Maxime Rooney of the Pleasanton Seahawks has confirmed on Sunday morning that his intent is to represent the United States internationally in competition.

Rooney’s success in yards has been well-documented, and the high school junior-to-be will be one of the top NCAA recruits in the class of 2014.

If he could repeat those times at Nationals next week, which is the selection competition, it would make him a probable invitee for the U.S. Junior Pan Pacs team that will travel to Hawaii from August 27th-30th. At that point, his sporting citizenship would be locked in unless he went to live in the Philippines for a year, according to FINA rules.

Rooney has another big schedule at U.S. Nationals next week, with 7 entries. He’s well underseeded in most of the events when his best times from Junior Nationals are considered, but will still have an opportunity to race for spots in A, B, or C finals.

Logical. Good for him and good for USA.

Now you need to investigate the case of Taylor Ruck.

What other nationality is Ruck? Does anyone know?

If I have well understood, but I have read a lot of different things on swimswam, she’s a dual US-Canadian citizen. But it’s not clear. 🙂

good for him. Always nice to see when people aren’t afraid to take the more challenging route