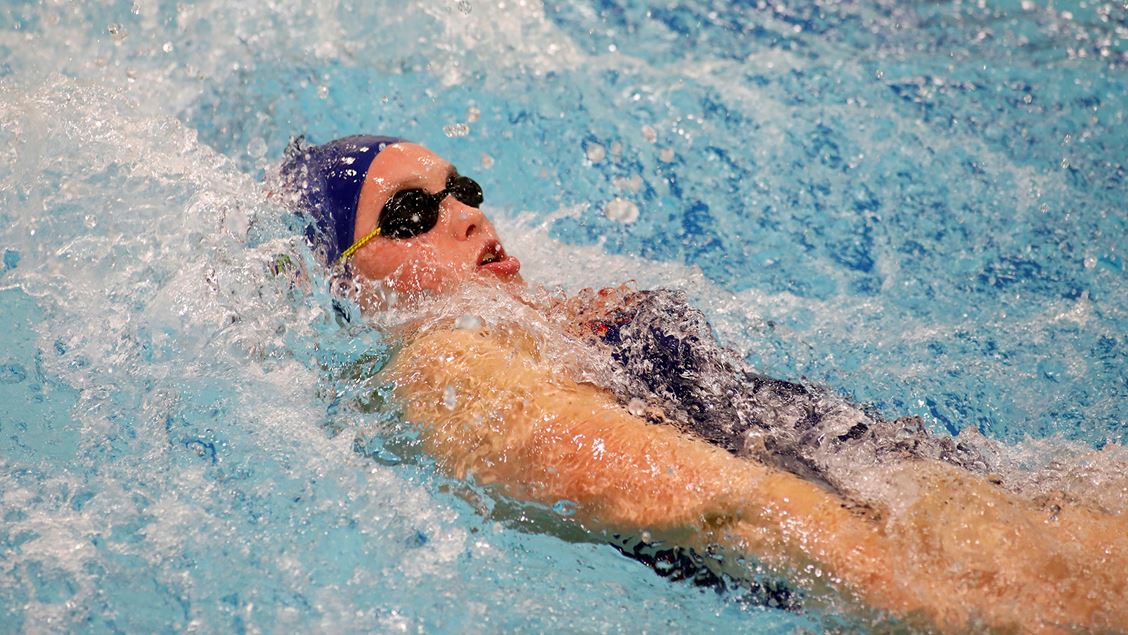 South Orange, N.J. – The Seton Hall men’s swimming & diving team won eight individual events on their way to picking up the win over Drexel on Saturday, 170-127. The win improves the Pirates to 5-0 in the fall semester.

After a first place finish in the 200 medley relay with a time of 1:32.48, Caleb Smith (Charlottesville, Va.) got the Pirates going in the individual events with a dominant showing in the 1000 free. Smith finished in first with a time of 9:41.65, more than 12 seconds faster than the next competitor.

Joining Dickson as a multiple winner was freshman Sierra Cripps. Cripps captured first in the 200 fly with a time of 2:05.77 and yielded the same result in the 100 fly coming in at 57.62.

Other winners included freshman Madeline Bachand who got things started for the Pirates coming in first in the 1000 free with a time of 10:31.05 and Taylor Jackson (Thornton, Colo.) who cleaned up took first in both diving events. Jackson took home scores of 239.77 in the 3 meter dive and 269.55 in the 1 meter dive.

Down late, the Pirates rallied to go 1-2-3 in the 500 freestyle to put themselves back in contention. Led by Dickson, Bachand and Jill Calocino (Maywood, N.J.) took second and third respectively, for the Pirates’ clean sweep.

The meet was the Pirates last home event of the fall before the compete in the Patriot Invitational from Nov. 21-23 in Fairfax, Va.

SOUTH ORANGE, N.J. – A short turnaround did not faze Drexel women’s swimming and diving as the Dragons collected their second win in as many days with a 160-139 result over Seton Hall. The men’s team fell to the hosts, 170-127.

The Drexel women improve to 2-0 on the young season, while the men drop to 1-1.

“Today was a physical and mental challenge for the team coming off of competing last night,” head swim coach Adam Braun said. “It took a little bit to get rolling but I’m pleased with the way the team fought through the ups and downs of the meet. I’m excited to see what we can do next weekend down at Loyola with a different format of events.”

The Dragons won a combined 16 events, including sweeps in the men’s and women’s 100 back, 100 free, 200 back, 200 IM and 200 free relay. Four Dragons – Alexa Kutch, Gabrielle Rudy, Jason Arthur and Paris Raptis – collected multiple individual victories on Saturday. Kutch and Arthur added a pair of relay team wins as well.

Saturday’s action began with first- and third-place finishes in the 200 medley relay. The team of Kutch, Megan Sicinski, Lera Nasedkina and Ryann Styer turned in a collective time of 1:46.70 to win the event by .48 seconds. Alicia Diaz, Rudy, Hollie Hopf and Kaitlin Perni finished third at 1:47.22.

The men placed second in the same event. Kiran Richardson, Zachary Valenzuela, Raptis and John Scully touched the wall at 1:32.98

Jake McBride failed to repeat in the 1000 yard free, following yesterday’s gold-medal performance with a second-place finish. The freshman clocked in at 9:54.35, nearly four seconds better than the third-place finisher.

Kutch swept the backstroke events for the second day in a row. A six-time conference champion in the discipline, Kutch bettered her time in the 100 back, clocking in at a season-best 56.21. The senior went on to top the field in the 200 back as well with a time of 2:03.62.

The Dragons claimed first and second in the men’s 100 back. In a neck-and-neck race between teammates, Richardson topped Arthur by .03 seconds with a winning time of 51.54. Arthur trailed closely behind in second at 51.57.

Drexel took a total of 16 points from the women’s 100 breast, finishing first through third. Rudy topped the field by over two seconds, touching the wall at 1:04:20. Sicinski followed in second with a time of 1:06.38, and Rebecca Churchill clocked in at 1:09:28.

Raptis made it four wins in four tries in the butterfly races this season with a pair of wins against the Pirates. He topped the field in the 200 fly with a time of 1:51.25. The sophomore clocked in at 49.69 in the 100 fly for yet another individual victory.

Styer and Nasedkina finished in the top two of the 50 free for the second-straight day. The pair of Drexel newcomers flipped last night’s results with Styer edging out Nasedkina for first place. Styer posted a time of 24.29, and Nasedkina clocked in at 24.58.

Richardson was .03 seconds away from being a two-time winner on Saturday. The junior from Kincumber, Australia placed second in the 50 free with a time of 21.57.

On the boards, Katie Caputo and Becca Demaree placed second and third, respectively, in the 3-meter. Caputo scored a 236.40 in the event with Demaree close behind at 232.35. Demaree added a second-place result in the 1-meter (248.99) – finishing just ahead of teammate Hannah Jordan.

Drexel added second-place results in both men’s diving events as well. Anthony Musciano was edged out in the 1-meter, losing out by .06 points with a score of 275.33. Will Seely posted a score of 252.67 in the 3-meter.

In the men’s 100 free, Stathis Malamas claimed first place with a time of 46.40. Freshman T.J. Given earned his first top-three finish of his collegiate career, taking third (47.28).

Arthur won a close race in the 200 back for the first of his two victories on the day. He edged out Ross Pantano by two-tenths of a second with a winning time of 1:52.56.

In the women’s 200 breast, Sicinski topped the field by nearly seven seconds with a winning mark of 2:22.29. Teammate Churchill claimed third in the event.

The women added a pair of top-three results in the 100 fly. Nasedkina claimed second at 58.95 with fellow Dragons Lauren DiCamillo finishing in third.

Rudy ran away with the 200 IM, posting a winning time of 2:08.90, almost two seconds faster than the closest competitor. Sicinski added a third-place finish in the race as well.

Arthur and Raptis finished first and third, respectively, in the 200 IM. Arthur won with over three seconds to spare with a time of 1:52.99.

The Dragons swept the 200 free relay. The women’s team of Kutch, Styer, Diaz and Nasedkina clocked in at 1:37.36, while the men’s squad of Richardson, Scully, Malamas and Arthur finished at 1:24.59.

Drexel returns to action next weekend with the Thomas Murphy Invitational, hosted by Loyola (Md.). The two-day event begins on Friday evening.