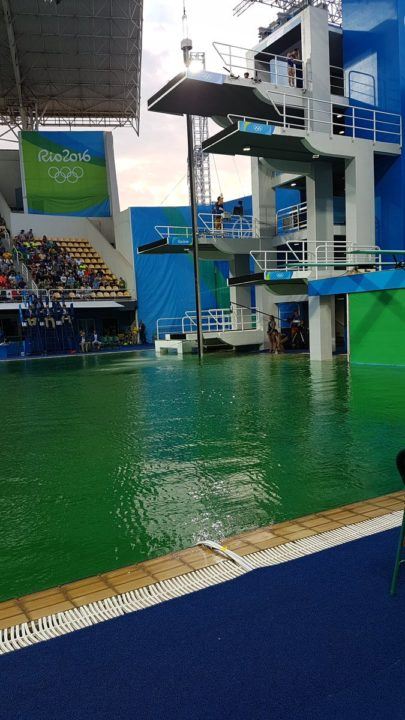 Are diving pools supposed to be green? Current photo via courtesy of David Boudia

After looking like a normal pool through two days of competition, the diving pool at Maria Lenk Aquatics Center in Rio turned a funky shade of green. Officials are investigating the cause, but the women’s 10m synchronized platform competition continued today regardless.

Of the peculiarity, the facility’s media manager stated, “Water tests at Maria Lenk Aquatics Centre’s diving pool were conducted and there was found to be no risk whatsoever to athlete’s health. We are investigating to determine what the cause of the situation was, but we are happy to report that the competition was successfully concluded.”

The swimming pool adjacent to the diving well that is serving as an additional warm-up pool for competitive swimmers was not affected.

“A high quality field of play is of the utmost importance to the Rio 2016 Committee. Water tests at Maria Lenk Aquatic Center’s diving pool found there is no risk to the athletes’ health. We are investigating what the cause was but are pleased the competition was completed successfully.

Below are additional social media accounts of the green pool situation:

Wait is someone playing a joke or are we celebrating St Patty's Day early here in Rio? #divingpond #Olympics pic.twitter.com/CsxxperHvM

I’m sorry, but how is this ok?