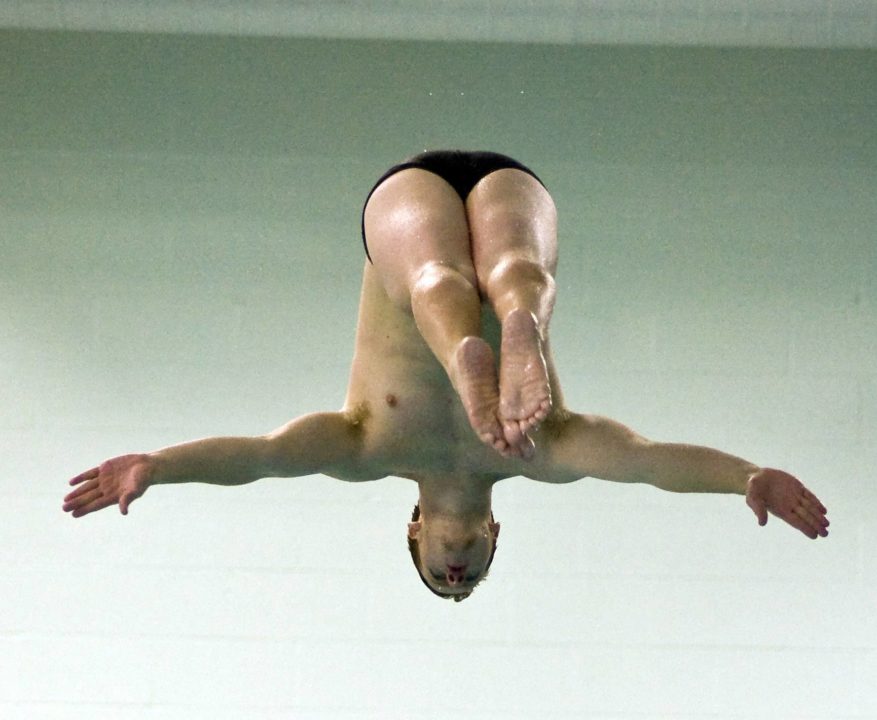 A sophomore at Albion College, Crinion has majors in exercise science and music. He balances singing baritone in the choir, shadowing physical therapists to gain practical experience in his future career field, working at Wesley Hall as a resident assistant, participating in the Delta Tau Delta fraternity and competing at the varsity level as a diver.

“The kind of people you meet in each activity is different and it allows me to be a well-rounded individual,” Crinion said. “I enjoy meeting new people and getting a better understanding of them. Plus, [music and athletics] open a creative side.

“I have been able to find the correlation between choir and diving,” he added. “I have to work hard, commit myself to what I’m doing and devote time to perfect my diving skills. In the same way, I have to practice for choir to make sure each note is on point and that I’m blending my voice with the choir.”

The path that led Crinion to diving, however, is remarkable. He participated in soccer his first year at Albion, gaining a varsity award after starting 10 contests at goalkeeper. It wasn’t long before Albion students were to leave campus for the summer that Crinion decided to try something different. The Jenison High School product approached swimming and diving coach Jake Taber about joining the squad even though he had never taken a leap off the board in competition.

“I always liked going to the high school pool and diving when I could,” Crinion recalled. “Coach Taber sent an e-mail to athletes last year asking if anyone wanted to participate in diving. When I decided to take a break from soccer I realized ‘why not try diving?’”

With minimal diving experience and no coaches available over the summer to help him get started, Crinion taught himself the basics by watching videos he found on You Tube for an hour or two each day.

“I looked at Indiana University’s You Tube site for diving and there were tutorials on how to walk and how to approach the board. That was the key video I watched to prep myself on how to dive.

“From there, I started watching Olympians to see how they flipped and [performed] the different positions – inwards, reverses and all of that,” he added.

Crinion learned from swimming teammates that the college pool was open during breaks in RA training in August, and that’s when he started to apply what he had gleaned from the videos.

Like any acrobatic activity, diving can be dangerous. After all, world-class athletes have smacked their heads on the board. Crinion didn’t notice the danger when watching the videos, but that changed once he started working with Albion diving coaches Willie English and Afton Bleight to add difficulty to his routine.

“There are times when I’m terrified, but I’ve learned I have to trust my body,” Crinion said. “Something bad happens whenever I get a little bit of self-doubt when I’m performing the dive. As long as I’m confident when I’m doing the dive, even if it’s not my best, I can at least land on my hands or feet.”

Crinion developed his first true diving-related health complication when he discovered an ear infection in the days after the Jan. 18 dual meet against Hope College. He’s expected to recover in time for the Britons’ final dual meet and the Michigan Intercollegiate Athletic Association Championships Feb. 13-15.

Soccer activity generally led Crinion to feel fatigued from back and oblique pain caused by sprawling to the turf to stop opponents’ shots. The difference in diving is the feeling of impact with the water and the discomfort in the neck and feet each morning after practice or a meet.

“When you have a bad hit in diving, it’s quick and it hurts,” Crinion said. “Every time you hit the water, there’s a mental block that says you don’t want to get on that board again. You have to overcome that. You have to hurt, get back up and try to do it again.”

Crinion maintains he didn’t have lofty expectations for his diving career when he started, but the improvement he’s made over the course of the season has led him to readjust his career goals. When asked about his most confident dives, Crinion reels off a list including the front 2 ½ on the 1- and 3-meter boards, the reverse 1 ½ on 1-meter and the double reverse on 3-meter.

After scoring 176 on the 1-meter and 186 in the 3-meter and scoring first-place points on both boards in the meet against Hope College, Crinion believes achieving the 200-point milestone is only a matter of time. He then hopes to qualify for the NCAA Division III Championships by his senior campaign.

“It’s humbling to see how far I’ve come,” Crinion said. “I’ll do anything as long as a coach can push me. When I talked to Coach Taber, he was telling me the field for diving in the Michigan Intercollegiate Athletic Association is wide open, how anyone can compete at that level. I thought as long as I’m here I’m going to try to place [in the league championship meet in February].

This release was provided to SwimSwam courtesy of Albion College swimmnig and diving.