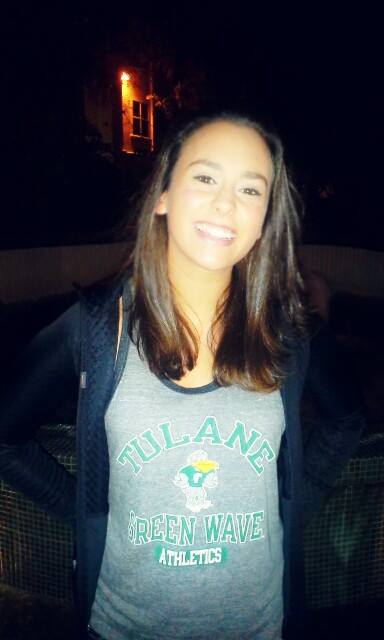 Freestyler Natalie Clausen from the Waukesha Express Swim Team in Wisconsin has verbally committed to the Tulane Green Wave. She will provide... Current photo via Dawn Cefalu-Clausen

Freestyler Natalie Clausen from the Waukesha Express Swim Team in Wisconsin has verbally committed to the Tulane Green Wave.

She will provide a new wrinkle to the Green Wave program that has lacked a real distance threat in the American Athletic Conference.

In yards, her best times are:

Those times in the 500 and 1650 free, based on last season’s times, would’ve put her in the top 8 in the conference in both races, something Tulane didn’t have, and would’ve made her the conference champion in the mile.

Even as the AAC continues to improve in quality and stature with teams like SMU, Connecticut, East Carolina, and Cincinnati, the distance freestyles are a conference weakness. Clausen’s presence for Tulane in their second year in the new conference in 2015-2016 after a 6th-place finish in Conference USA last year.

Clausen was the runner-up at the Wisconsin Division I High School State Championship in the 500 free last year. She placed 2nd behind now-graduated teammate Kaersten Meitz as part of Waukesha South’s state title.

Clausen recently got two personal bests now swimming with Randy Reese at CAT Clearwater Fl and East Lake HS new best time of 4.53:25 in the 500 fr and .52 in her 100 free on 9/20/13 very early in her HS season. Clausens training has certainly stepped up with her move to Florida.

Clausen completed her HS career as her team won 4a state in Florida Nov. 7th
She may be the only swimmer to have won team state all four years which includes frosh-jr years in WI and senior year in Florida. After being seated 2nd going into state with a personal best time of 4:51.4 in the 500 fr and 4th in the 200 IM .Clausen was ready for state when she came down the day of state with a high fever and vertigo. Clausen did not want to let her team down. She completed her events and participated in two winning relays. A truly honorable effort… Best luck to her as she moves into her college career.