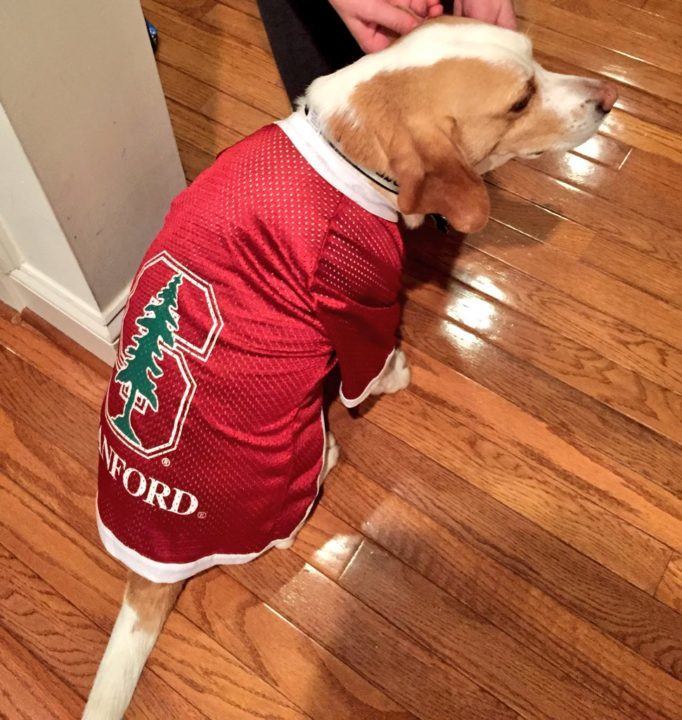 A picture of the Hirschberger family dog decked out in Cardinal, Tweeted out by Matthew's dad, signified his son's college commitment this week. Current photo via James Hirschberger

The Stanford men’s distance group got a big boost this week. On Friday, the school announced that they’d hire distance swimming legend Jeff Kostoff as their new assistant coach; and a day earlier, Matthew Hirschberger verbally committed to the program according to a Tweet from his father.

This marks the third-straight season in which the Cardinal have grabbed one of the country’s top distance freestylers – for 2015, it was Liam Egan (already a top-10 distance swimmer tat the college level now); for this coming fall they bring in National High School Record holder Grant Shoulds and True Sweetser; and now they add a National Age Group Record holder Hirschberger to that group for the fall of 2017.

Hirschberger showed big promise as a young age grouper and has carried that success through high school. A former Clearwater Aquatic Team (Florida) swimmer, he’s moved in the last few years to train with the best women’s distance swimmer in history, Katie Ledecky, at NCAP in the Washington D.C. Metroplex – Ledecky is also committed to swim for Stanford, though she arrives a year earlier.

That time in the 1650 is already good enough to have scored 14th (where Egan was) at last year’s NCAA Championships, even with Hirschberger having two years of training to improve upon it.

Hirschberger has an interesting connection to the man that is presumed to be his future coach: Kostoff. As a 15-16, Matthew swam an 8:45 1000 free, and when he swam it in 2015, pushed him to 7th-place on the all-time rankings (at any age). That included breaking a 33-year old National Age Group Record for 15-16s in the event that had been held by none-other-than Kostoff.

Though not eligible, the time actually was 4 seconds better than Kostoff’s own 17-18 record too.

Be assured that Matthew is as capable and dedicated in the classroom as he is in the pool. Stanford will get not only a top swimmer but a stellar student who will “swim with the best ” academically and bring honor to the university. Bonne chance Mathieu!
A former teacher who had the privilege of teaching Matthew for 4 years.

Does the fact that it is a “redshirt” mean he will sit out a year?

I wish the pic was from a better angle. Is that a beagle or a basset hound?

Stanford’s 800 free relay is going to look awesome in a couple years, they have some great 200 freestylers coming in

They still have to coach these swimmers when they get on campus… Stanford has been getting great recruits over the past few years (…or all the time) but the team has been on a downward trend over the last 2 seasons. I really hope Stanford can truly develop these swimmers in the future, because USA needs these younger swimmers

Again – knowing how hard it is to get into Stanford, how can a rising senior commit to a school prior to getting any types of offers from the college. Something is amiss here. Coaches aren’t allowed to “offer” anything and yet this has happened too often. Also looking at his times, the question comes whether he’s peaked. There’s no question he was a great age group swimmer but hasn’t really broached his current times in nearly a year.

At that level, it’s not likely he will reach those times very frequently, especially with the training he does with Gemmel. He has few meets now that he will fully taper for, so those times will become less frequent, but also faster. I’m sure OT’s will be one of those meets, and we will see improvement.

Coaches are allowed to make offers at anytime as long as the NCAA rules of communication/contact are followed. A 10th grade can pick up the phone and call a college coach, the coach can then make an offer to the athlete and they can accept. For a junior it is even easier since after September 1st of their junior year, athletes and coaches can email as much as they want. The athlete just has to initiate all phone calls.

It is doable and the future of swimming. That’s why you’re seeing so many commitments so early.

It’s called early action or early decision. And, yes, the athletes receive an acceptance letter from admissions before they commit. It’s fairly common.

I love that photo.

You mentioned grant shouts but I would say they also got the top true “distance swimmer” in this class in true sweetest, sure grant shouts would have a dirty mile but I see him as more of a middle distance guy

Good call, had forgotten about True.