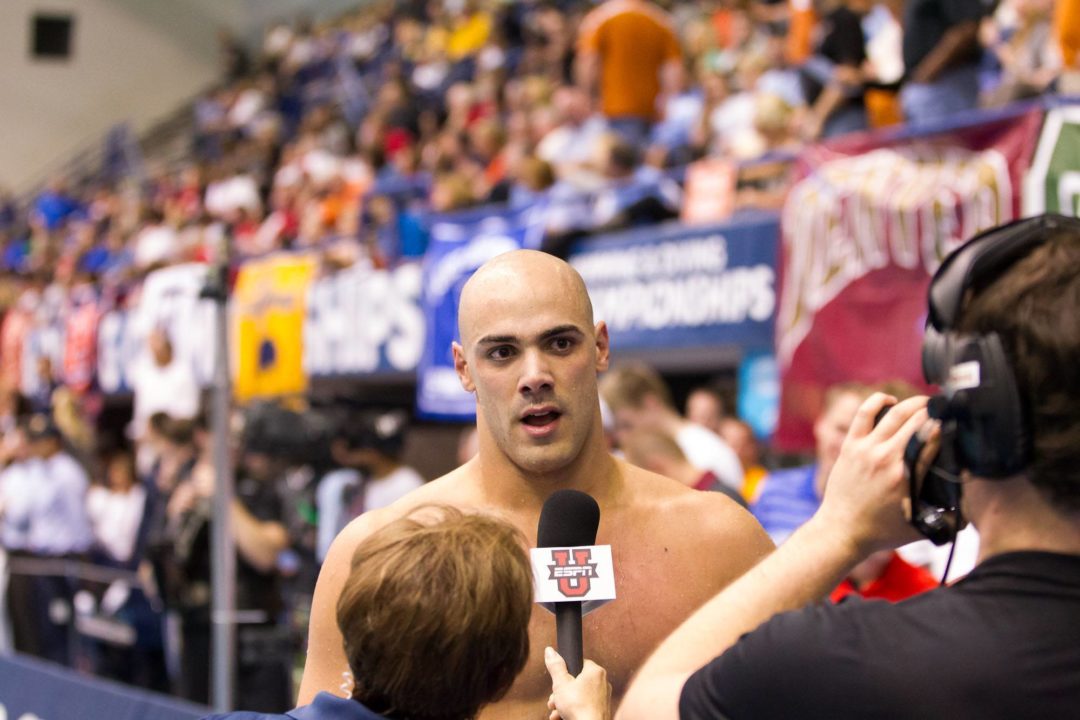 NCAA Champion Joao de Lucca will hope for at best a relay swim in the 200 free after failing to gain a club affiliation in time for the 2013 Maria Lenk Trophy. (File Photo: Tim Binning/TheSwimPictures.com)

The first day of swimming at the 2013 Maria Lenk Trophy, one of a trio of Brazilian World Championship qualifying events, was full of a fair bit of disappointment.

NCAA 200 yard free champion Joao de Lucca was unable to register with a team in time for the meet, an event which is so heavily team-focused it doesn’t allow swimmers unattached in the finals. The compromise was that de Lucca was allowed to swim a 200 free after the finals session, by himself, in an attempt at World Championship qualifying. There, he swam a 1:48.72, which was the fastest time of the evening session.

Had he swum that time in the 200 free final, and all else equal, de Lucca would have been the meet’s champion. As things are, though, he’ll have to hope for a relay spot, because his time was short of the FINA Automatic Qualifying Time (despite a misprint in the CBDA notes that had such a time set half-a-second slower than it really was).

The fastest time overall from the meet belonged to Nicolas Oliveira, who was a 1:48.10 in prelims to clear the FINA standard. Fernando Pires Do won the Final in 1:49.23 as Oliveira slid back to third.

There is one more Brazilian qualifying meet, but it’s unlikely that de Lucca will be able to miss enough time from school in two weeks to try one more shot at the 1:48.2 he would need to swim individually in Barcelona.

Also notable in that 200 free was a 1:50.71 from 16-year old Luiz Altamir. He’s a part of the new look Flamengo club that no longer has a senior group and instead fields only a junior team.

The women’s 200 free was won by Federike Heemskerk, a Dutch swimmer who is representing Minas Tenis at this meet. She won in 1:58.14, which is a new Meet Record. She was the only swimmer to break two minutes, as Jessica Valaheiro was the top Brazilian finisher in 2:00.69, followed by Manuella Lyrio in 2:01.25.

Daniel Orzechowski was 4th in 55.42 in the final after, in prelims, putting up the fastest time of the day of 54.64. Orzechowski had a very good 2012 season that included breaking the South American Record in the 50 backstroke, but this 4th place finish will be disappointing (though his Pinheiros team took four of the top five spots for huge scoring).

Minas, thanks in part to big bonus points from Heemskerk’s swim and a win in the women’s 200 free relay, took a big lead on the meet’s first day.

does deLucca actually have to attend classes?

Another dig at Brett Hawke 😀

he attends louisville, not auburn. he’s a great swimmer, i congratulate him. i was at ncaa’s and saw his 200 free race, it was fantastic! but is anyone else tired of seeing these over-age foreign swimmers compete against, in many cases, much younger, less mature american kids? just asking!!!

Congrats to nico for making the qualifying time in the 200 free- we are proud of you — peaceful warrior!

But I am not expecting something very good of the girls.. much more hope for the boys..

Pereira heat time was a bogus entry.52low should not be a surprise for him.
But Brandonn improving was amazing…very strong time.

Any young Brazilian swimmers we should get excited about for 2016 Rio?

Right now, Matheus Santana(who made 17 in begin of April).Last year, he made 22.79 and 50.25(freestyle, LCM), a huge age group record in 16years-old category in Brazil.He has beaten several Cesar Cielo records in 15-16 years-old range.The problem is: He changed club team in January(and coach), i dont know how he is gonna perform in a new training set.
Luiz Altamir is a great swimmer, but very short(five-nine, i think).Santana was six-three in December.
Whe have some guys already beating Santana´s times at 14(Felipe Ribeiro, with 52.2 in 100free), but nothing in Australian level.