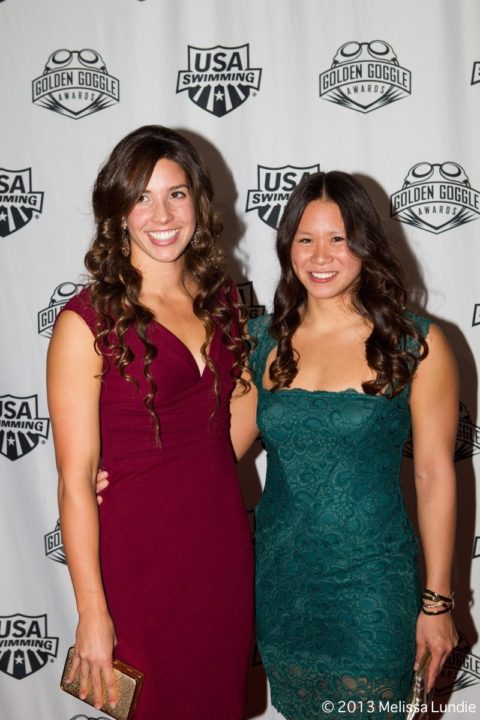 Stanford teammates Maya DiRado and Felicia Lee are among five honored as nominees for the Honda Sports Award from THE Collegiate Women Sports Awards. Archive photo via Melissa Lundie, melissalundie.com

Coming off an NCAA Championships filled with fireworks, five of the biggest explosion-producers have been announced as nominees for a prestigious award.

Stanford teammates Maya DiRado and Felicia Lee, California freshman Missy Franklin, Texas A&M breaststroker Breeja Larson and Georgia’s breakthrough freestyler Brittany MacLean are up for the Honda Sports Award for swimming and diving. The Honda Sports Award is given each year by THE Collegiate Women Sports Awards (CWSA) to one female athlete in each of 12 NCAA sports. The 12 winners move on as the official nominees for Collegiate Woman of the Year, with the corresponding Honda Cup trophy presented this summer.

The nominees are selected by a panel of swimming and diving coaches, and the winner is selected by an overall vote – each NCAA member institution gets one vote.

Here are brief descriptions of each of the five nominees achievements this year from the nomination press release by THE Collegiate Women Sports Awards:

Larson was named the SEC Women’s Swimmer of the Meet for the second straight year after setting record meet records in the 100 and 200 breaststrokes. The senior from Mesa, Ariz., won her third-straight NCAA title in the 100 breaststroke in record fashion setting a new school, conference, NCAA and American mark.

Lee earned seven All-America honors at the 2014 NCAA championship while capturing five NCAA titles. She finished first in the 100 fly and with relay teams in the 200 and 400 free and the 200 and 400 medley.  The senior from Wayne, N.J., was a two-time Pac-12 Swimmer of the Month and finished her career overall with 19 All-America accolades.

MacLean, a sophomore from Etobicoke, Toronto, Canada, was named the NCAA Swimmer of the Meet at the 2014 NCAA Championship after capturing national titles in the 500 and 1,650 freestyle races. She set an NCAA record in the 1,650 freestyle win. She was also the SEC Champion in both events. Overall, she holds three NCAA titles at Georgia.

Multiple swimmers and divers have gone on to win the overall Honda Sports Award, most recently Stanford’s Tara Kirk in 2004. The award is meant to honor athletic skills, leadership, academics and community service.