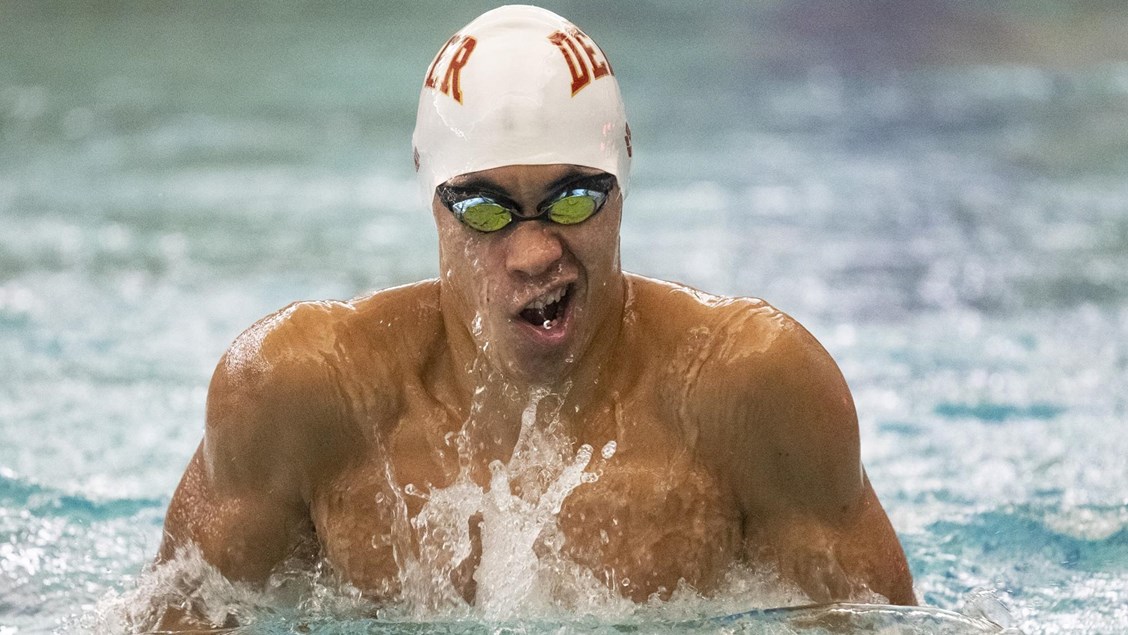 Denver's Ariel Sanes swam a 52.32 in the 100 breaststroke, which broke the league championship record and is a possible NCAA qualifying time. Current photo via Denver Athletics

The Denver Pioneers remained undefeated in the lanes, while South Dakota State continued their success in the men’s diving events, on day 3 of the 2020 Summit League Swimming & Diving Championships.

The Denver women haven’t lost a single event with just 1 day of competition to go, while the Denver men have won every swimming event, falling only in diving competition to South Dakota State.

The Denver men kicked off the night by winning the 400 medley relay in 3:07.93 – a better-than-11 second margin of victory. The swim set a new Summit League Championship Record.

That time was .19 seconds of the NCAA Provisional Standard in the event. Denver already has an Auto cut (“A” cut) in the 200 free relay, which means they only need “B” cuts in other relays to be eligible to race those at the NCAA Championships as well. A 400 medley relay time trial is scheduled for Saturday after prelims.

That was one of 2 Meet Records on the 3rd day of competition. The other came in the men’s 100 breaststroke, where Denver’s Adriel Sanes swam a 52.32. That time ranks him 18th in the country so far this season and would have earned an invite to last year’s NCAA Championship meet.

His previous personal best in the event was 53.50, and his best time coming into this season was 54.00.

After the relay victory, Denver went 1-2-3 in the men’s 400 IM, led by a season best of 3:54.74 from junior Trent Panzera. Panzera takes the torch in the race from the now-graduated Kyle Ewoldt, who through last year was 4-for-4 in his career in Summit League titles in the 400 IM.

Valparaiso’s Dominic May placed 2nd in the 200 free in 1:39.08, which cut almost 2 seconds off his previous school record in the event. He becomes Valparaiso’s first All-League honoree in men’s swimming since 2006.

Rounding out the day for the Denver men was a 1-2 finish in the men’s 100 backstroke with Neil Wachtler winning in 47.28 and Patrick Groters placing 2nd in 48.26. That’s Wacthler’s 2nd-straight title in the event; he’s also the defending champion in the 200 back, which he’ll race on Saturday.

In the evening’s lone diving event, South Dakota State took a 1-2 finish with freshman Zach Boyd winning over senior teammate Mitch Raihle. On Wednesday, Raihle won the men’s 3-meter event. There is no platform diving at the Summit League Championships.

The Pioneers had another dominant win in the 100 backstroke from the freshman Arky, who previously in the night led off the 400 medley relay. She swam 54.37, beating out South Dakota’s runner-up Sabrina Sabadeanu, who was 2nd in 57.00. As compared to the team’s depth in the 200 free, Arky was the team’s only scoring entrant in the 100 back.

But not all races were dominance for Denver on the night. In the 100 breaststroke, Omaha freshman Caroline Gardner came close to ending Denver’s unbeaten streak, swimming a 1:02.90, but a fast final 25 yards from Denver sophomore Brandi Vu was enough to hold on for the win in 1:02.23.

For Gardner, that’s a lifetime best, her first since 2018, in the event. Vu has been half-a-second faster.

The other individual event, the women’s 400 IM, saw 3 Denver Pioneers finish in the top 4, led by junior Uma Knaven in 4:21.43. The lone interloper was South Dakota State freshman Alyssa Eckstein, who took 2nd in 4:23.52.

Eckstein’s evolution in this event throughout the season indicates that she might be the one to end Denver’s run, even if it has to wait until next year. Her best time entering her collegiate career was a 4:32.89, done in 2016 when she was only 14 years old. Mid-season she improved that to 4:27, and now has cut another three-and-a-half seconds off her personal best.

That’s not how this works. The swim team can’t just go out onto the open market and say “hey anybody wanna pick up a swim team?” They are contractually bound to the Summit League, and a move would involve moving all of their athletics programs to a different conference. Moving all of their athletics program to another conference would be a very expensive move just to satisfy the needs of the swimming & diving team, and further, it would be really hectic to try and move their entire athletics program every time one sport began to excel. It’s not good for business for mid-major schools to move conferences from one where they’re winning conference titles to another, without much more… Read more »