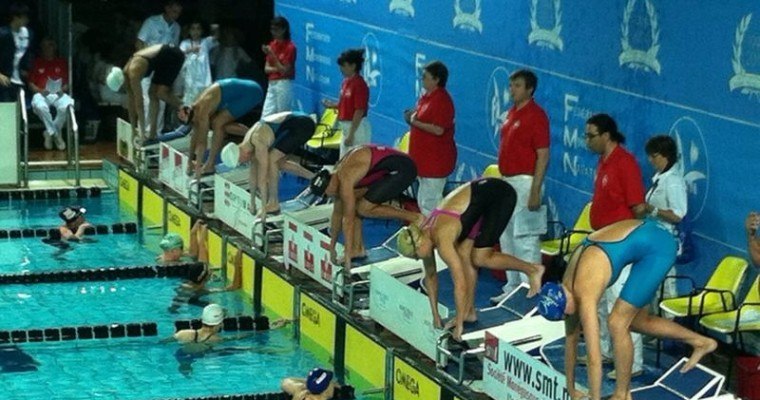 After 5 Meet Records were broken on day 1 of the 2014 Mare Nostrum series, it looks like a couple...

After 5 Meet Records were broken on day 1 of the 2014 Mare Nostrum series, it looks like a couple of more are poised for Sunday’s completion date at the International Meeting de Monaco.

The prime candidate coming out of prelims could be the 100 fly, where Germany’s Steffen Deibler swam a 52.86 for the top seed. A good target for him in finals would be around a 52.1, which is the time he swam in Hamburg in April as his previous in-season best for 2014. That would put him within a tenth of Andrew Lauterstein’s 2009 Meet Record.

A rejuvenated Jemma Lowe is the 3rd seed in 2:10.94, Germany’s Franziska Hentke is the 4th seed, and Katinka Hosszu is the 5th seed in 2:12.06. Hosszu’s times fell well off expectations by the end of Saturday’s finals session, so this energy saving is perhaps intelligent.

That was the first of three prelims swims for her, and she took a top seed in the other two. That includes the 100 back (1:00.35) where Daryna Zevina, Lizzie Simmonds, and Mie Nielsen are all behind her; and the 200 IM (2:11.94) where she’s trailed by Evelyn Verraszto, Zsu Jakabos, abd Kanako Watanabe. Britain’s Sophie Allen and Hannah Miley both missed the A-Final in the 200 IM.

Though it sounds strange to say, this author might be in the corner of Hosszu scratching the 200 fly final in favor of the other two, after she looked great in the 100 back and 200 IM in the morning.

Ryosuke Irie cruised to a 1:58.91 in the men’s 200 backstroke, which ties for the top seed with Peter Bernek. After a Meet Record on Saturday in the 100 back, though, Irie should be in the 1:54 range in finals.

Not making it through to the final of that 200 back is American Ryan Murphy, after touching in an easy-looking 1:59. He was DQ’ed for not initiating his flip turn before the end of his final arm stroke on his stomach.