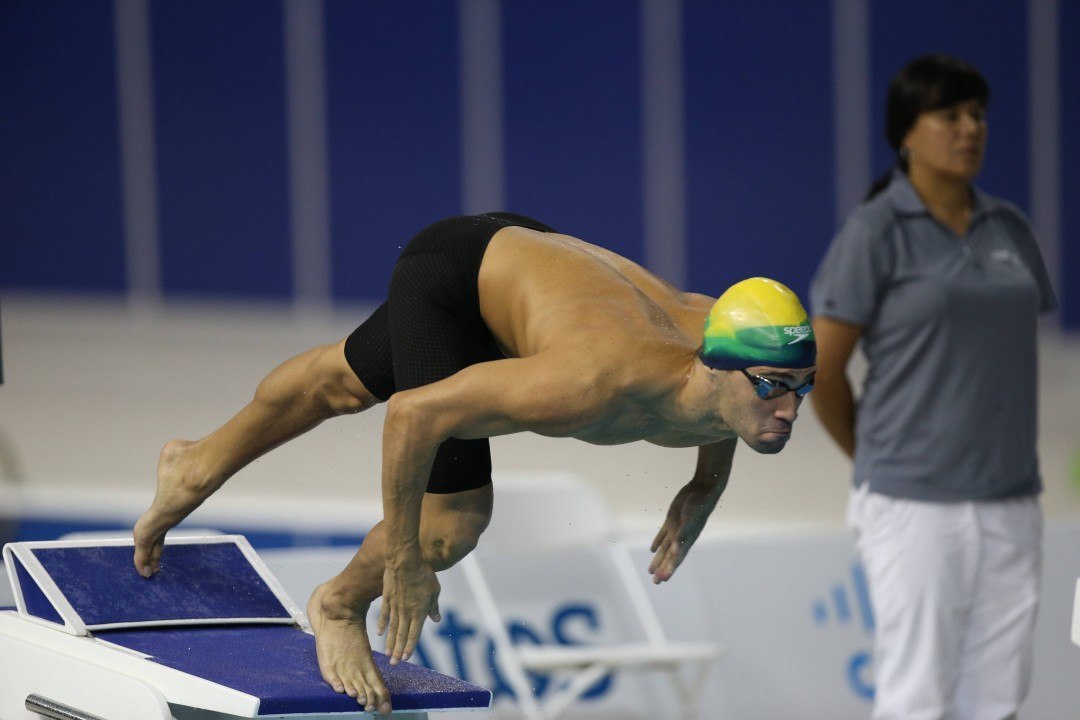 The first of two Olympic-qualifying meets for Brazilian swimmers kicked off this morning, as the 2015 Brazil Open (Troféu Daltely Guimarães e Torneio Open 2015) concluded its first prelims session in Palhoca, Santa Catarina. The meet runs from today, December 16th through Saturday, December 19th and is officially one of two meets at which Brazilian swimmers will be selected for their nation’s Olympic roster.

After just the first prelims session on the first day, we already have our first Brazilian Olympic roster spot most likely filled. Leonardo De Deus clocked a ferocious 1:57.43 to comfortably clear the FINA Olympic “A” standard of 1:58.22 and almost certainly earning his place on the Brazilian line-up for Rio. De Deus led this morning’s field by almost 2 seconds, as the next-closest competitor was that of Fabio Santi who recorded a prelims mark of 1:58.22. It took just 2:08.29 to make the final tonight, of which De Deus has already opted out of swimming, having already accomplished his mission.

Said De Deus of this strategy (roughly translated), “Me and my coach Carlos Matheus, had the goal of getting this standard in the 200m back in the morning. My other main event is the 200m butterfly, which is on Saturday. I was close to the Brazilian Record of 1:57.10 held by Thiago Pereira. I’m glad that, with such an exhausting year, with so many competitions, I was able to make this best time.”

The women have a little bit more work to do tonight, as the top-seeded female out of the 200 backstroke prelims was Corinthians’ Natalia De Luccas. Although coming into the meet with a top-seeded 2:14.79, De Luccas clocked an initial outing of 2:17.04, well outside the FINA Olympic “A” standard of 2:10.60. Although swift enough to capture the middle of the pool for tonight’s final by over a second, she’ll need to drop over 7 seconds to reach that A standard. Of note, however, De Luccas was the only swimmer to even dip beneath the “B” standard that sits at 2:15.17, so she officially holds that qualifying time at this point in the process.

During this morning’s prelims, the men’s and women’s 50m butterfly, a non-Olympic event, was contested, with Daynara Ferreira and Nicholas Santos leading the fields in times of 26.91 and 23.16, respectively. The fastest heats of the men’s 1500m and women’s 800m freestyle events will be swum during tonight’s finals as well.

Today is probably the weakest day, at most we might see 2 more swimmers qualifying (Kanieski and Valente at 1500m free, Brandonn will swim it only as Maria Lenk). On 800 free I would be surprise if any girl hit the B standard,,,