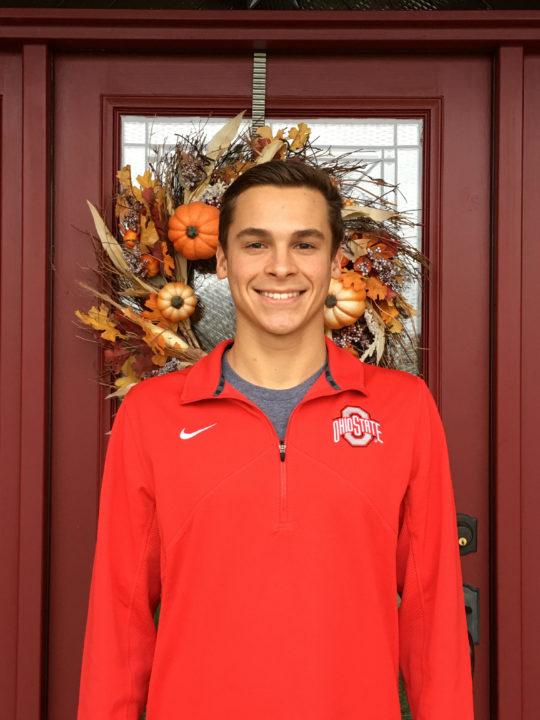 Evan Stapp, who swims for the Dayton Raiders in Beavercreek, Ohio, will join The Ohio State University’s class of 2021 in the fall. Current photo via Evan Stapp

“I am very excited to announce my commitment to The Ohio State University. The academics as well as the athletics made this choice a very easy one. GO BUCKS!”

Evan Stapp, who swims for the Dayton Raiders in Beavercreek, Ohio, will join The Ohio State University’s class of 2021 in the fall. Stapp attended Tippecanoe High School and was a two-time A-finalist at the 2016 Ohio State Division II Championships, finishing fifth in the 200 IM (1:54.64) and sixth in the 100 free (46.76). Stapp only began swimming competitively during his sophomore year of high school. As he was showing rapid improvement during his senior year in 2015-16, he made the strategic decision to take a year before entering the NCAA. Stapp took classes at a junior college and trained with Dayton Raiders. As he explained it at the time:

“I am just entering my 3rd truly competitive season and for that reason, have elected to go to college in the fall of 2016 at a local 2-year university so that I can remain with my club team and trainers to improve, while advancing my education by taking a full schedule of classes so that in 2017, I can transfer as a sophomore while retaining a full 4-year athletic eligibility with the NCAA. I believe this combination and approach will get me where I want to be.”

Stapp has come quite far in the last three seasons. Below are the progressions in his top SCY events:

This is a small suggestion, but the table of time improvement is difficult to read. I understand the desire to emphasize the development, but you should have the years read from left to right, rather than than right to left.