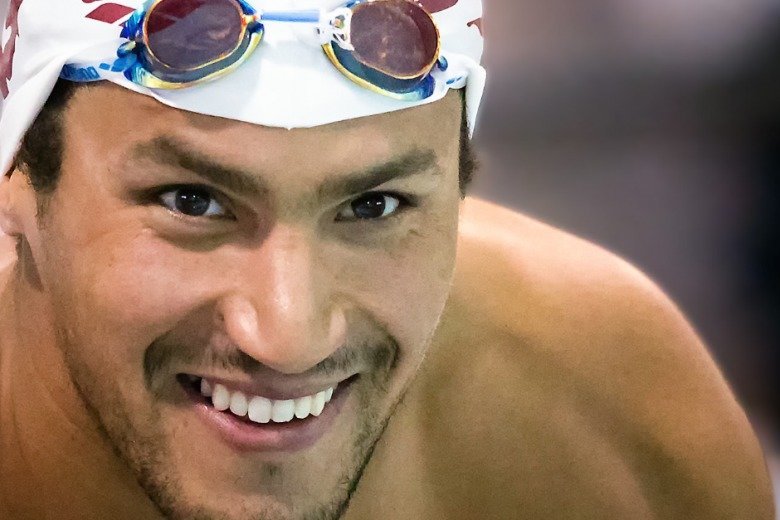 The defending Olympic champions from Croatia won their opening match in men's water polo, though it was a much closer battle with the Americans. Ous Mellouli, featured photo, medals again in open water! (Stock Photo: Tim Binning/TheSwimPictures.com)

Greece’s Spyridon Gianniotis won the day’s open water race, taking the men’s 10 km title in a wild race. He was the 4th-place finisher in the same event at last year’s Olympics.

Silver went to Germany’s Thomas Lurz and bronze went to Tunisia’s Ous Mellouli. Mellouli won the 5km two days ago, and also took the Olympic gold a year ago in the 10km race, but Gianniotis’ advantage may have been that he did not swim the 5km race and was thus much fresher.

Canadian Richard Weinberger finished an admirable 5th place, despite giving up the better-part of a minute retracing his steps to pass a missed turn buoy. The top American finisher was Alex Meyer in 42nd. Full recap here.

The Chinese diving machine got back on track on Monday, sweeping the gold medals in the women’s 10 meter platform and men’s 1-meter springboard.

In the women’s synchro event, Liu Hiuxia and Chen Ruolin took the gold, with Chen’s being her fourth-straight world title in the event. She was diving with a new partner for the fourth time across four titles, but the transition was once again seamless for gold.

The Chinese winning score was 356.28, followed by Canadian duo Meaghan Benfeitoo and Roseline Filon in 331.41. The gap from silver to bronze was much narrower, with Malaysia’s Pandelela Rinong and Leong Mun Yee less than three-tenths of a point behind the Canadians in 331.14.

The Australians and the Brits were 4th and 5th, respectively, and the American duo of Cheyenne Cousineau and Samantha Bromberg finished 7th.

In the men’s 1 meter, a non-Olympic event, Shixin Li became the first man to ever successfully defend this crown in the first individual final of the Championships.

China has now won the last four titles in the event, and 7 out of the last 8, but this event broke a streak of 6-straight silver medals that the Chinese had been riding. Ukraine’s Illya Kvasha won silver with a score of 434.30, and Mexicos’ Kevin Chavez won bronze in 431.55.

This meant a rare occasion without the Chinese earning the maximum number of medals, as Sun Zhiyi was 4th in 425.05.

Austrian Constantin Blaha, trained in the United States at Arizona State, was 5th in 411.75. Neither American representative made the top 12 to advance to the final: Harrison Jones was 14th and Kristian Ipsen was 17th.

The Russian sweep remained on in women’s synchro, as they cruised to their third gold medal in the Team Technical Routine with a score of 96.600.

The home team from Spain picked up their third medal of the synchro competition so far, but the big story was the Ukrainian women, who earned their first-ever World Championships medal in synchro by taking bronze in 93.300.

The men’s water polo tournament got underway on Monday, as they alternate days with the women.

The big match of the day was Croatia, the Olympic champions, against the United States in a replay of the Olympic quarterfinal round where the Croatians thumped their American counterparts. This matchup was much more competitive, but it was the Croatians who won and picked up two big points in Group B with a 9-7 victory.

The scoring was balanced in this defensive affair, with nobody putting in more than two goals for either team. American Tony Azevedo only mustered three shots, and was unable to connect on any of the three.

Also in that group, the Canadians beat the African Champions from South Africa. In a high-scoring affair, the Canadians shot over 50%, led by Nicolas Constantin-Bicari with four goals. The South African keeper Dwayne Flatscher struggled, putting his hands on only 4 of the 21 shots on cage, though he didn’t get much help with his teammates giving up three penalty shots.

In Group A, the biggest upset early of the tournament came with Greece beating Montenegro 6-4. Greece was 9th at last year’s Olympics, and Montenegro was 4th. Greece got a phenomenal performance in goal from Konstantinos Tsalkanis, who stopped 9 of 13 shots put his way. (five members of this 13-man roster, including both goalies, are named Konstantinos).

After a scoreless first quarter, Greece put up 3 goals in the second quarter to take a big lead at the half. Montenegro’s offense would come alive a bit, but the deficit was too large.

The Greek team has a history of playing well in big games. They didn’t advance to the knockout round, but they did play eventual champions Croatia to a 6-8 nailbiter in the opening round of the Olympic tournament.

The host-team Spain got off to as good of a start as their women did on Monday, thumping New Zealand 18-3. That includes a 12-2 blowout in the second half. Felipe Perrone scored 5 goals on a perfect 5 shots in just 18 minutes of play. Xavier Valles notched three field blocks to assist his goal keepers, who split the game in net.

New Zealand got two goals from their star Eamon Lui-Fakaotimanava, including a penalty shot.

Serbia beat Australia 10-7; the Australians played a very well-balanced game, with 7 goals scored by 7 different players, and a pair of 5-meter shots to boot, but the Serbians were too talented. They were more efficient, taking a higher quality of shot, and connected on 45% of attempts.

Hungary put on a big first-half onslaught to be China by a score of 13-5, including Marton Szivos who poured in 3 goals from outside of 5 meters.

In Group D, Italy beat Romania 10-4, and Kazakhstan gave Germany a tall task in the fourth quarter, but ultimately the Germans won 9-8. The 800 announced attendance was the biggest of the first round, aside from the host team that drew 900 fans.

On Tuesday, three medals will be given out. One in open water swimming as the premier women’s 10km race comes, and the other two in diving with women’s 1 meter springboard and men’s synchro 3-meter medals finals.

It will be the women’s chance in the water polo pool. The highlight match will be North American grudge match, as the United States and Canada battle out for what will probably decide the champions of Group C.

Thanks for this detailed update. I was enjoying the http://www.fina.tv yesterday, and it is not accessible today. Do you know what happened? Will we have live stream for the pool swimming? . . . and the ‘cliff’ diving :-}

I just found out that All my sports tv cable channels including eurosport asia, fox sports, star sports, etc NONE of them is broadcasting FINA aquatic world championships, and there is not a single legit internet webcast which allow an international like me to subscribe, although I’m willing to spend money for the access!!!!

So, if any of you have links to an accessible webcast, bootleg or not, please share it with me and email it to [email protected]

Who owns the rights in your area? Isn’t there any public broadcaster which shows the meeting? Otherwise the FINA TV should be available for use.

By the way, don’t forget to write feedback to your cable channels on their policy not to purchase rights to show aquatics.

I have already sent very stern emails to my cable provider.

I can’t believe FINA doesn’t sell international internet rights – in this internet age.
I am so willing to pay to view.
Is FINA TV live? will it broadcast in entirety?

Wow…that sucks big time.Why you dont try some streaming program like sopcast or something like that?
I will have TWO channels in my country(Sportv and Record News).Too bad is in portuguese.Sportv streaming is very easy to find on the web.

Yes, I will resort to scouring the web to find live tv webcast.

Many thanks to all of you who have sent me links.. 🙂