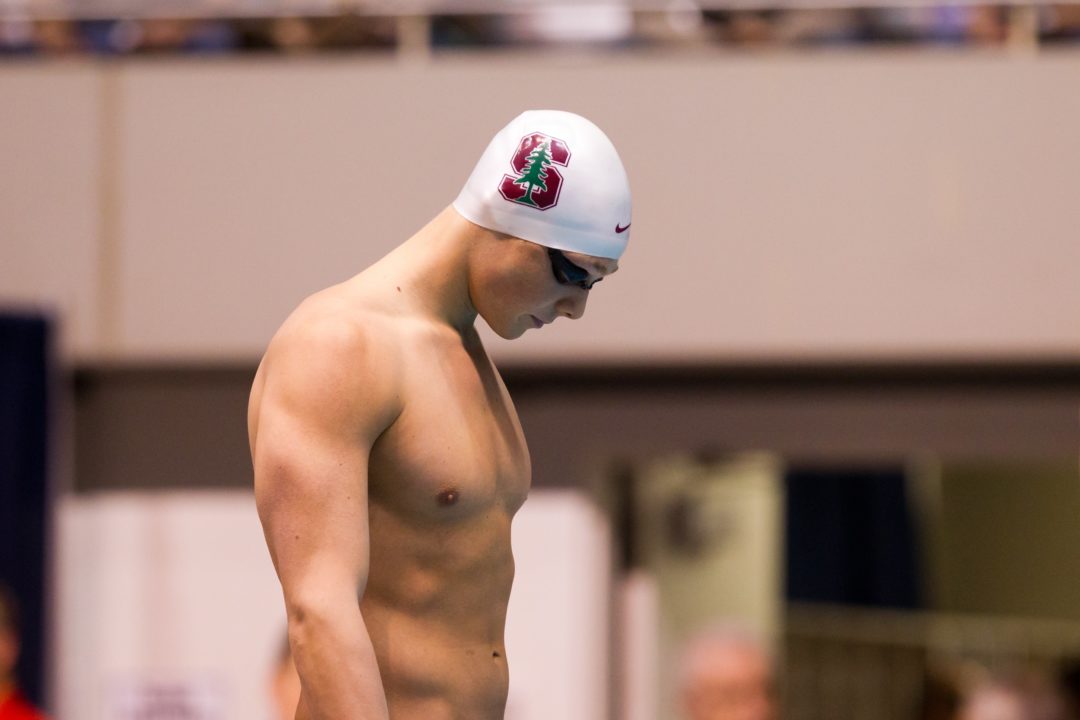 David Nolan swam about the same time as he did last season to win this year's 200 IM, but the manner in which he swam it was very different. (Credit: Tim Binning/TheSwimPictures.com)

On day 2 of the 2013 Men’s Pac 12 Championships in Federal Way, Washington, times continued to be overall a bit disappointing. That is, of course, excluding some fantastic top-end times, and some really significant drops further into the ranks. Through the middle-chunk of the scoring, though, times continue to look like there’s a lot of teams at this meet that are hoping to push through to NCAA’s without much rest at this meet.

USC’s Cristian Quintero started last season midway through, and even on that short turnaround still ended up with a decent year. His potential, though, and the reason why the Trojans were so excited to bring him in, is now really starting to shine through. He won this race in 4:13.37 for his first individual Pac 12 title. That scoots just ahead of Connor Jaeger as the best time in the country this season, and is just a few tenths slower than the time with which he was a runner-up at NCAA’s last year.

After that performance, Quintero must become the favorite to win the 1650 on Thursday as well.

After his time, there wasa huge dropoff; Quintero pushed the pace early (out in 47.78) and nobody hung with him. The runner-up was Cal sophomore Adam Hinshaw in 4:18.08, and his junior teammate Jeremy Bagshaw took 3rd in 4:18.65. This race sort of epitomized how a lot of the races, especially those that aren’t the 100-yard strokes, will go, with a lot of youth. There were no seniors in the top 8, and only two juniors. Stanford’s Danny Thomson was the top freshman finisher in 6th place with a 4:21.25.

Dimitri Colupaev, who slipped to the B-Final after a miscount on his prelims swim, won that in 4:20.24. He looked like he would pull away in that final, but Cal freshman Trent Williams and Michael Haney finished very well to close the gap to 4:20.95 and 4:21.28, respectively.

The time was nearly the same, but the way Nolan swam this race was very different. He split 29.15 on his breaststroke leg, which was more than a second faster than he split at this meet last year. He’s done a lot of breaststroking this season as he has been one of the big options for the breaststroke leg on the Cardinal 400 medley relay. In exchange, he’s backed way off of his opening butterfly leg and hung toward the back of the back through 50 yards; that seems like a smart strategy as his backstroke is so good that it still had him in the lead at the halfway mark of the race.

Tarczynski was still a little bit faster on the breaststroke (28.9-29.1), but the gap is significantly smaller than it was.

Stanford got big points in this race with Nolan’s win and 5th-9th place finishes, but their failure to knock any of the Cal swimmers lower than 4th was still a “plus” result for the Golden Bears.

Stanford freshman Tom Kremer won the B Final in 1:45.37; USC’s Morten Klarskov was DQ’ed out of that B final after touching 2nd in the heat.

USC’s Vlad Morozov won the men’s 50 free in 18.86: a stunning time that ranks him just .01 behind Auburn’s Marcelo Chierighini as the fastest time in the country this year.

There’s been a lot of crazy numbers thrown out about what Morozov is capable of this year, though with Russian Trials coming up we don’t know for a fact that he’ll be at full rest for NCAA’s. The consensus seems to be that he’ll get Cesar Cielo’s record of 18.47 if he is at a full taper. There’s a lot of hope that we’ll see the first ever 17 on a relay split (Cielo and teammate Matt Targett have both been 18.1’s).

But don’t think that he’s going to run away from Chierighini. Without getting into any debates as to whether Brazilian facial hair or Russian leg hair has a higher coefficient of friction, the two have settled on fairly similar patterns early in this meet: a sub-19 in prelims, and just a few hundredths faster in finals.

Morozov’s teammate Jack Wagner took 2nd in 19.53, and Utah got their first ever Pac 12 podium finish with a 19.64 from Nick Soedel in 3rd. He tied there with Cal sophomore Seth Stubblefield.

In the B-Final, Cal’s Nick Dillinger, just a freshman, took 9th in 19.87. Even dating back to the days of Anthony Ervin, this program has had a lot of success historically with male freshmen sprinters; that’s despite most sprinters specifically taking a little bit longer to develop.

The official standings have only incorporated a single diving event thus far, but we’ve gone ahead and included all of the diving points, as the diving competition was completed last week.

The Cardinal are holding onto a narrow, 27-point lead; but consider this: in terms of “official scoring” through this point in the meet, Cal is roughly 90-points ahead of last year’s pace already. That could be trouble for the streak, though thus far Stanford has left a whole lot of points in their exhibition swimmers (including three exhibitioned 500 freestylers who could’ve made the A-Final).

Just 2 observations about the time conversion tool on the homepage.
1. It works only for the men. There isn’t a gender option.
2. I wanted to convert the time of Vlad Morozov last December in Istanbul in SCM to the time in SCY. 20.55 in SCM converts here on swimswam to 18.51 in SCY. I wanted to see if it was the same result on swimming world and no, it converts to 18.37. It seems the 2 websites don’t have the same calculation process.

I´ve seen calculators that also consider the altitude where the time was done and to which altitude you want to convert it….

I try to explain. On swimming world, they have a gender option and the results are different according to your choice, male or female. On swimswam the calculation process is the same for men or women. Is it deliberate? Or is it an error? I hope I have made myself clear.

A large amount of converters are all different. Swimming world I have found is notoriously faster than all of the other ones. Not everyone uses the same formulas to convert so not everyone one will turn out the same.