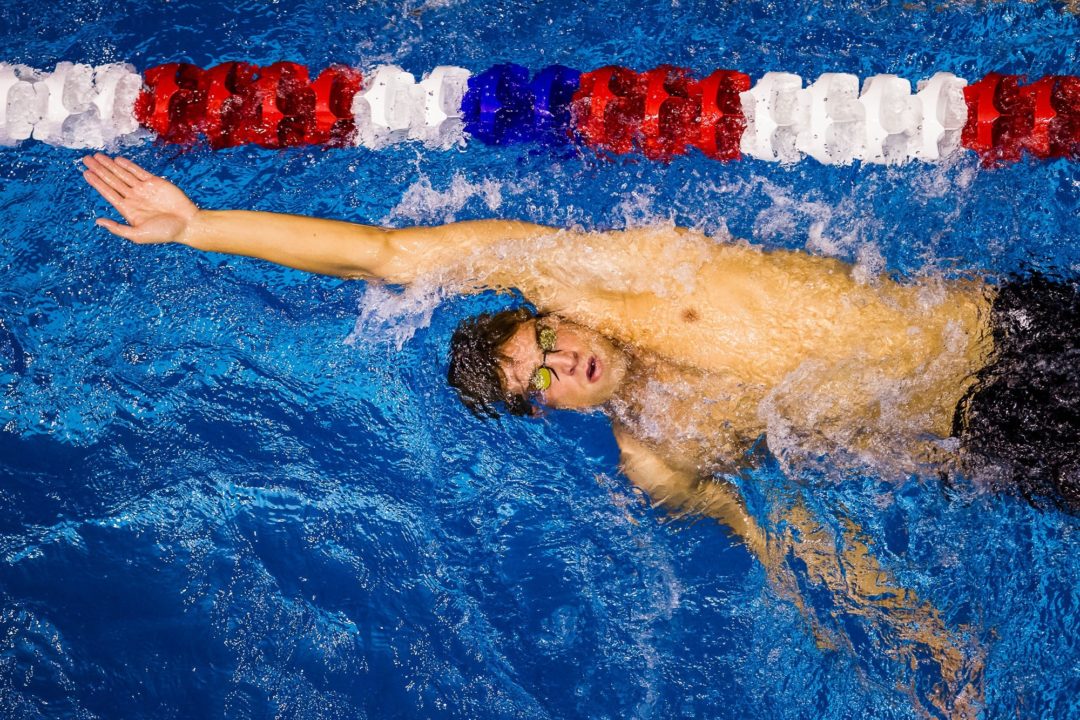 Today's backstrokers owe a lot to Vassallo, Berkoff, Suzuki and the other backstrokers who paved the way for the manner with which how the stroke is now competed. Current photo via Tim Binning/TheSwimPictures.com

Swimming has always had it’s pioneers, those that break the mold with a new technique or race strategy, breaking the glass ceiling of what we believe to be possible with the sport. Weathering the resistance of traditionalists these renegades are the ones who help push the boundaries and expectations in swimming.

During the mid to late 1980’s it was a group of swimmers led by David Berkoff who showed how effective the use of the underwater dolphin kick could be, spawning a pack of imitators that would cause FINA to scurry to amend limitations on the amount of metres a swimmer could perform underwater.

Since then dolphin kicking has become a fixture of starts and turns in every stroke, from current 100 yard backstroke American record holder Nick Thoman, to proficient underwater kickers Ryan Lochte and Michael Phelps, and to this we owe a nod to Berkoff, Suzuki, a little known swimmer named Jesse Vassallo and the “Berkoff Blastoff.”

While many hail David Berkoff as being the trailblazer in underwater dolphin kicking, it was actually a young swimmer who trained under Mark Schubert at Mission Viejo in the late 1970’s who deserves the credit.

In 1976 at US Nationals a 14 year old Jesse Vassallo was lined up to swim the 100m backstroke. In the lane next to him was eventual 4-time Olympic Gold medalist John Naber. Vassallo, who was a foot shorter than the 6’5″ Naber, figured that he could do a bunch of dolphin kicks off the start to avoid the wash from the next lane.

Unfortunately for Vassallo, he would never get the full credit or even exposure for the innovation. He would peak around 1980, just in time to qualify for the US Olympic squad that would have gone to the Olympics had they not boycotted.

Although Vassallo never got to show off his new technique to a broader audience, the idea had been planted within the mind of a young David Berkoff.

When Berkoff entered college in 1985, he was considered a solid backstroker. Not exceptional, but solid. Over the next couple years at Harvard under Joe Bernal, Berkoff would play around with his start, building up his start so that he was going up to 40m underwater.

With his dolphin kick steadily improving, so did his placings nationally. In 1986 he placed 3rd at the NCAA Championships; a year later he’d break the NCAA record in 48.20.

At the 1988 Olympic Trials Berkoff became the first man to break the 55 second mark, doing it twice (54.95/54.91), and displacing former record holder Igor Polianski (USSR) as the favorite heading into the Games in Seoul later that summer.

In the preliminaries Berkoff would lower the world record for a third time, swimming a ridiculous 54.51. In an interview with NBC following heats he’d state that it would be a race between him and former world record holder Polianski (who qualified second fastest), and that it would take a world record to win gold later that night.

Flying under the radar was Japan’s Daichi Suzuki, who swam the third fastest time in the prelims. Suzuki had also become quite proficient at the underwater dolphin kick, typically swimming the first 25m underwater. Suzuki was also no stranger to the international stage, having competed at the 1984 Olympics in Los Angeles, where he would come short of making the final.

Most notably — and something that was completely passed over by much of the swimming community– during the 1984 Games Suzuki had already adopted the underwater dolphin kick, going even further than Vassallo had been at that point.

Although Suzuki wasn’t picked by many to win in Seoul, in subsequent interviews, Suzuki – who was 21 years old at the time of his victory in ’88 – didn’t feel like the underdog heading into the final that day in Seoul, even though Berkoff had posted a world record mark that morning.

Having saved energy by not giving his all in the preliminaries, and also noticing that Berkoff tended to perform best in the mornings, Suzuki was feeling confident that he could win.

In the final Suzuki would stay underwater for an extra five metres, with the pair being shadowed by Polianski as the trio – in lane’s 3, 4, and 5 – would all stay underwater until the 30m mark while the rest of the field all swam above the surface.

Berkoff – who was visibly last off the start – would turn first with a half body length lead in 25.47, two tenths slower than his split from the morning. In the last 8m Polyansky and Suzuki closed hard and fast on Berkoff, who would be unable to hold off the challengers.

THE LEGACY OF THE BERKOFF BLASTOFF

In the wake of the 1988 Seoul Olympics, FINA made changes to restrict the maximum number of metres a backstroke swimmer could perform underwater dolphin kicks. Citing athlete safety, within months of Seoul the rule limited swimmers to going underwater for 10m off of the start and turn, a rule that was relaxed to 15m in 1991. (Freestyle and butterfly were given similar restrictions in regards to face-down dolphin kicking in 1998.)

Even though FINA amended the rules to allow for shortened underwaters, the NCAA didn’t immediately follow suit. As a result at the 1989 NCAA Championships in Indianapolis Berkoff swam what was at the time the fastest time in American history in the 100 yards backstroke, swimming a 47.02, knocking off nearly a second off of Jay Mortenson’s former mark of 47.97 set two years earlier.

Suzuki retired immediately after having won his gold medal, while Berkoff would finish out his collegiate career with Harvard, and also returning to win another gold medal swimming the heats of the winning US medley relay at the 1992 Barcelona Olympics, as well as a bronze in the 100m backstroke behind Mark Tewksbury of Canada and American Jeff Rouse.

The sport continues to be a huge part of both of their lives.

Last summer Suzuki was named to president of the Japanese Swimming Federation, making him the youngest at 46 years of age in the history of the position. In the years since Seoul Suzuki has been active at nearly all levels of the sport, having been the varsity coach at Juntendo University, as well as sitting on the board of Japan’s Anti-Doping Agency, as well as serving on the World Anti-Doping Agency’s Athlete Committee.

Berkoff got involved with coaching as well, and he is currently the head coach of the Missoula Aquatic Club in Montana after finishing law school. Berkoff was inducted into the International Swimming Hall of Fame in 2005 and is now also a member of USA Swimming’s Board of Directors.

On behalf of short swimmers everywhere, we thank you Messrs. Vassallo, Berkoff and Suzuki, for giving us a fighting chance.

I never knew the legendary Jesse Vassallo was only 5’5″!!! Even more impressed, if that’s possible…

JV is 5′ 9″, according to wikipedia. I met him once, and this seems about right.

I wouldn’t say that Jesse was “a little known swimmer”.

I would go further – all of us that swam in the 1970’s were VERY aware who Jesse Vassallo was, and it was a privilege to swim in the same water with him (and many others this author might consider “little known”). Coaches were teaching underwater dolphin kicks on starts and off turns on the three allowable strokes by the late 1970’s due to people like Jesse Vassallo. Long before David Berkoff and Daichi Suzuki.

Even shorter.. was there in the last 30/40 years an even shorter male WR holder?

incredible privilege to be a teammate of dave berkoff when he made the transition from very good to exceptional/transforming! the first few meets with the underwater were awesome to watch

Weird story: I think it was around ’78 and the Nadadores were up in Vancouver, Canada for what is now the Mel Zajac meet. It was at the Aquatic Centre under the Burrard Street bridge and Vassalo was playing pick-up basketball on court right at the pool. He twisted or something and blew his knee out! He was never the same after that.

The Vancouver Aquatic Centre! Great memories of that pool, even though it had a slanted roof so you couldn’t depend on the ceiling to tell you if you were going straight or not swimming backstroke. Typically ended up with a mouthful of lane rope if you tried.

The pickup games and bump tournaments that took place between events at that pool, and later at the UBC aquatic centre during were Zajac legendary. Not much more satisfying as a little age grouper than being able to crush an Olympic finalists basketball out into the parking lot during a heated game of bump.

You’re bringing back memories. I did my first ever Canadian nationals there in 1976. The water was salty and so buoyancy was slightly better than at most pools. Looking back, I’m surprised that they got away with holding major meets there.