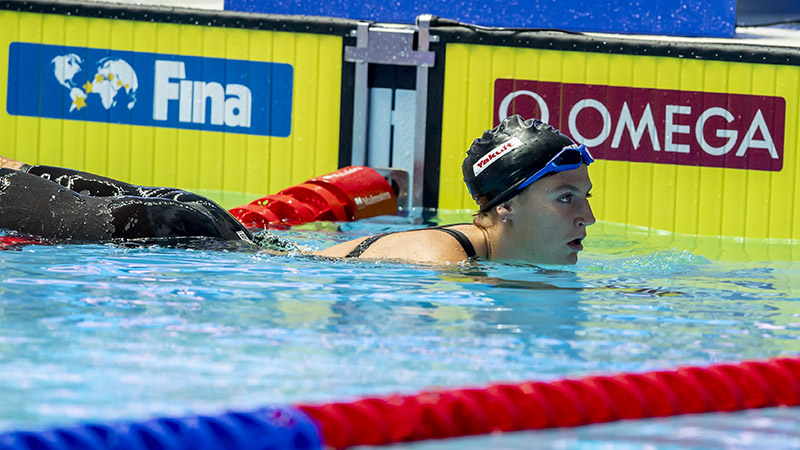 In episode 6 it's clear that Cusinato is continuing to hit barriers with her strength and stamina levels but is pushing through them. Archive photo via Giorgio Scala / Deepbluemedia / Insidefoto

In episode 5, Tusup introduces the ‘Darkhorse confessional,’ a segment within this series. He explains that he and his swimmers will answer questions from fans, address comments on their social media pages, and talk more about their training experience and their lives in these confessionals. Episode 5 is, then, Tusup’s confessional, where he talks in-depth about his time in the world of golf prior to this, what it was like getting fully back into swimming and coaching after being removed from the sport for awhile, and what he’s looking forward to in the near future.

In episode 6, we’re back into training footage, where it’s clear that Cusinato is continuing to hit barriers with her strength and stamina levels but is pushing through them. We’ve seen her testing her threshold in the pool in earlier episodes, and now we’re seeing her push her limits in the weight room with some footage of weight training featured heavily in episode 6.

Fantastic!
We should dispense with her swimming for the 200 IM and 400 IM Olympic gold in 2020. Just give her the medals because Tusup guaranteed that she would win.Hell hath no fury like Tusup scorned.

Finally, I was wondering when we were going to address this! Sorry, but every episode to me is Shane throwing shade at Katinka. But maybe it’s just me . . .

It’s more like he’s showing how exceptional she is. Only one Iron Lady, as poor Ms. Cusinato is finding out the hard way.

I was referring more to his comments about “not knowing” what was going on in swimming or “who was at the top” at Ilaria’s events, as well as talking about winning gold and breaking world records. You know since Katinka happens to be at the top of the IMs, defending Olympic champion, and the world record holder . . .

Only four comments? Come on!

It’s still uncanny to me how much Ilaria looks like Katinka did at that age.

“your body is handling it well” —– what an idiot.

This is definitely the cheekiest swimming series on YT.

Any worse, and it’ll get an Alaskan DQ.