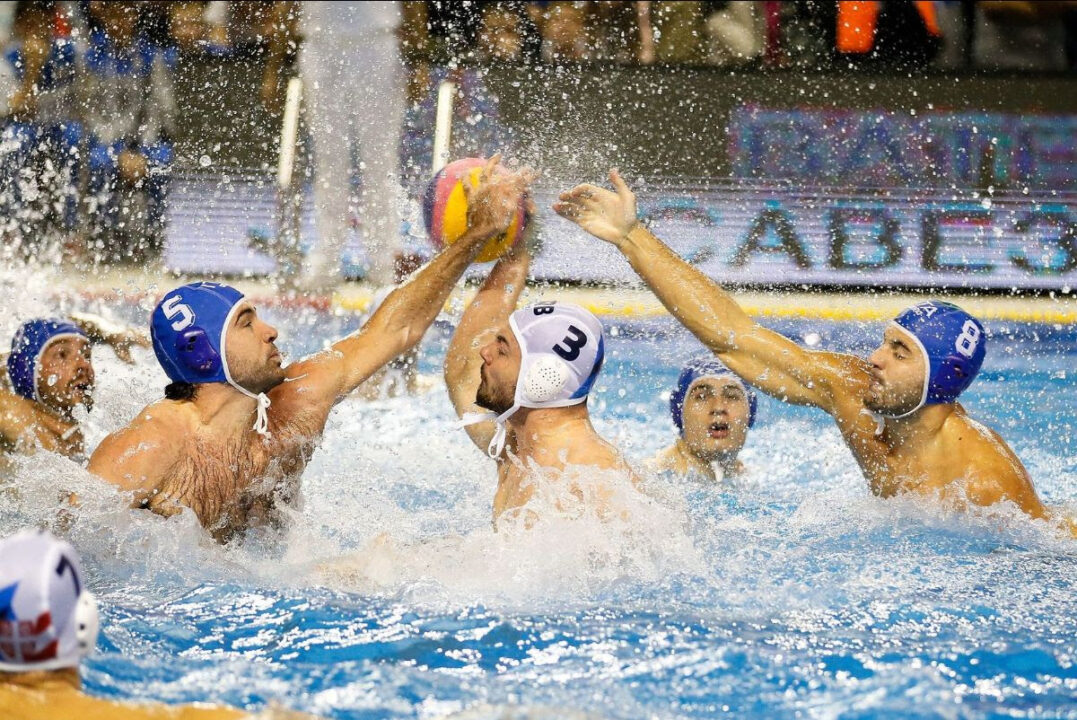 The opening round of European qualification matches in the FINA Water Polo World League 2022, started today with three encounters, producing winners Croatia, Serbia and Hungary. The fourth match, between Germany and France, scheduled for Germany, was postponed due to Covid-19. Croatia beat Greece 12-11, Serbia defeated Italy 12-9 and Hungary downed Montenegro 14-9.

As with any match, extra-man statistics proved the difference and the patient, steady attack from the Croatians came to the fore, while Greece toiled hard, but drifted to 12-9 behind, grabbing the last two goals in the final 93 seconds.

Match heroes
Ioannis Fountoulis, with his four goals, inspired Greece, as always, but it was Josip Vrlic (CRO) who earned the Player-of-the-Match award for his two goals and standout play at centre forward, which was sorely needed in the second half after captain Ivan Krapic was absent from the match soon after halftime with an injury. Marko Bijac kept Croatia’s goal brilliantly and was instrumental in the victory.

Turning point
Definitely, the third period. Greek captain Ioannis Fountoulis netted his fourth for 7-5 and then Croatia responded with three straight extra-man goals to go into the final period 8-7 ahead. Greece made it 8-8 and 9-9 in the final period until Croatia sent in three more extra-man strikes to seal the match.

Stats don’t lie
The Croatian extra-man conversion rate of nine from 14 (Greece was 3/12) was the fatal flaw in Greece’s defence. All credit, though, for Greece’s excellent conversion of field goals.

Bottom line
As with all teams playing these European qualifiers, it is a time to experiment and insert younger players into the programme and see how they perform. Greece has the older, more experienced players and should have maintained the lead until the end.

What they said
Ivica Tucak (CRO) — Head Coach
“I am very satisfied with our victory in the first game our team played after the Olympics. Very important for our victory was the percentage of 9/14 in the player above. I saw some important elements that I wanted, and we will now prepare for our next obligations.”

Dimitris Kravaritis (GRE) — Head Coach
“Croatia seemed more ready in the game than our team. He had also made a camp with Montenegro, while we had fewer days of preparation. In the third eight minutes we made some mistakes, the fatigue came, we managed to equalise 9-9, but Croatia escaped two goals and finally won. We used some new players. Greece is the silver medalist of Tokyo; it takes patience and dedication.”

Serbia was two up at the quarter, three ahead at halftime and the final break and went four clear in the last period before Italy made it 11-9 inside the final minute. Serbia had the last say when Dusan Mandic netted his third goal.

Match heroes
Veteran Strahinja Rasovic scored four, including two from well outside, and all came before the last break. Mandic used his left arm to lethal effect. Newcomer Luca Marziali took his opportunity backhanding his first goal and scoring off a cross-pass when 6-5 behind and then struck twice more in the last 96 seconds of the match — both coming off rebounds. New captain Andrea Fondelli scored twice for Italy.

Turning point
By leading 4-1 early in the second quarter the match had turned fully in Serbia’s favour. It’s hard for any team to come back from that far against Serbia.

Stats don’t lie
The extra-man count had Serbia on the front foot, converting six from 13 while Italy gained four from 12. Serbia took five steals off Italy with one against.

Bottom line
To beat Serbia, you have to score first and keep the team honest. Youngsters making it to the big stage for the first time can find playing Serbia in Serbia with a hugely partisan crowd, very daunting.

What they said
Dejan Savic (SRB) — Head Coach
“I hope this game proved it was a very tough game because of the young players from both sides who wanted to prove that they must play in the selection of the first team of Italy and Serbia. This is most important for us because it is the beginning of this year and I hope now we can choose younger players for the game against Slovakia on the 8th of March.”

Alessandro Campagna (ITA) — Head Coach
“The match was very good; a nice game. We were very close; we missed something so that we could stay more close. At the end of the third quarter the gap was three goals, but we had the chance to be tied, to be in front, and we missed this kind of goal and after we didn’t play well on defence in the last quarter.”

HUNGARY-MONTENEGRO, Group A
GYOR (Hungary) – Olympic bronze medallist Hungary had the honour of defeating reigning champion Montenegro 14-9 in their Group A match. The victory was built on a 4-1 opening quarter that led to an 8-4 halftime break and a five-goal margin heading into the final eight minutes.

Match heroes
Viktor Vigvari was the package for Hungary, netting four goals — one either side of halftime and twice in the final period. Krisztian Manhercz delivered three times, including once from the penalty line. For Montenegro, Marko Mrsic scored consecutive goals and Aleksa Ukropina threw in the last two goals.

Turning point
At 1-1 until 2:35 of the first quarter, Hungary blasted in three goals and then added another just after the break for the irretrievable 5-1 margin. From then on it was 9-8 to Hungary, but the result was never in doubt after the earlier onslaught.

Stats don’t lie
When Hungary throws 14 for 14 from action and produces a respectable five from eight on the extra-man attack, the writing is on the wall. Montenegro was similarly good from the field with 9/10, however, the player-up count was a sad 4/15.

Bottom line
Being a champion means nothing. Eighth in Tokyo, Montenegro was no match for Hungary today and that bronze medal last year restored some of the Olympic pride for Hungary after such a perfect early start to the century.

What they said
Vladimir Gojkovic (MNE) — Head Coach
“They were the better team today. OK, we start a new season after the Olympic Games with a lot of young players. We have tried to do something last few days. We have a lot of mistakes in some situations to give a lot of space to some Hungarians, the best shooters in a good position to shoot. I think we have a lot of space to improve and we will continue working because this is a very young team.”