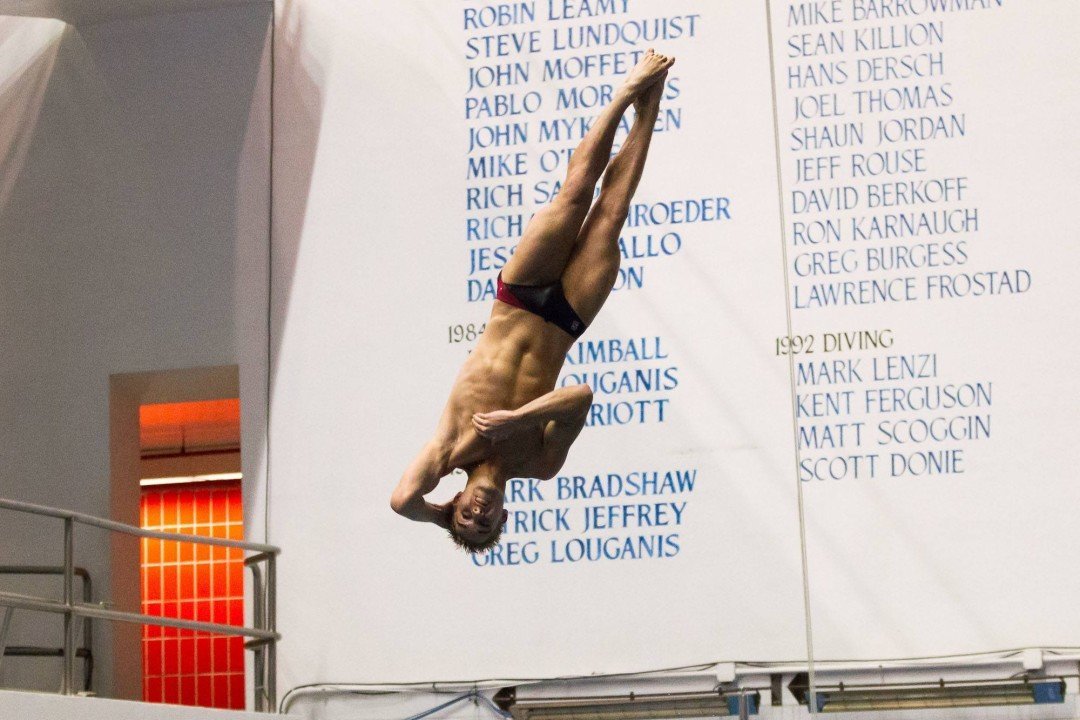 With their wins, they also secured spots on the U.S. team for the FINA Diving World Cup in Rio de Janeiro in February. Jessica Parratto (Dover, N.H./Bloomington, Ind.) and Michael Hixon (Amherst, Mass./Bloomington, Ind.) finished second in the individual events to earn World Cup berths as well. The World Cup is the final opportunity for countries to qualify spots for the 2016 Olympic Games.

Ipsen finished with 1427.15 points to win the 3-meter title after winning the synchronized 3-meter earlier in the week. Hixon moved into second place in the last round, finishing with 1397.20 points to overtake Sam Dorman (Tempe, Ariz./Coral Gables, Fla.), who finished third with 1373.65 points. Four-time Olympian Troy Dumais (Ventura, Calif./Austin, Texas) was fourth at 1368.15.

“I’m really happy with how this entire week has gone. This is a big year and this is the start of that year. I broke my hand at the beginning of October and I was really nervous because I wasn’t sure how this week was going to go or if I was even going to be able to dive. I’ve been around for a really long time though, and I feel like my experience has kind of taken over. I’m feeling really confident with these competitions,” said Ipsen, who won bronze in synchronized 3-meter at the 2012 Olympic Games.

Hixon and Dorman battled back and forth for the second spot. Hixon led heading into the finals but Dorman took over the second spot after round one of the finals. Hixon came through with a 94.50-point reverse 3 ½ tuck in round four that moved him ahead of Dorman by 1.1 points with two rounds to go. Dorman retook the lead in round five with an 82.25-point reverse 1 ½ with 3 ½ twists, but scored just 60.80 points on his final dive, a front 4 ½ tuck. That opened the door for Hixon, who closed out his list with 87.75 points on an inward 3 ½ tuck to take the silver medal and the second World Cup spot.

“It was a really good event. There were four guys going for two spots. It was a great contest, and all four of us really brought it today. Sam was up by 10 points heading into his last round but he missed a bit so I knew I had a chance. I’m really excited to represent the U.S. at the World Cup,” Hixon said.

Cozad finished with a three-list total of 1008.35 points to claim her first individual national title, finishing 53.25 points ahead of Parratto. Earlier in the week, Cozad and Parratto paired for the national title in synchronized 10-meter. Tarrin Gilliland (Liberty Hill, Texas/Midland, Texas) was third at 941.15.

Cozad led by just 3.35 points heading into the finals but had her best list of the meet with 345.30 points on her five dives in the finals to extend her margin of victory. She scored 82.50 points on her back 3 ½ tuck in round four and had 76.80 points on her second-round armstand double back somersault with 1 ½ twists.

“I wasn’t thinking about only being up by four points. I was thinking I’ve got five more dives, and I’m thinking about how I’m going to hit them,” Cozad said. “I’m looking forward to World Cup. It will be another opportunity to prepare me for the Olympics. Every dive I do is to try to get me on the Olympic podium.”