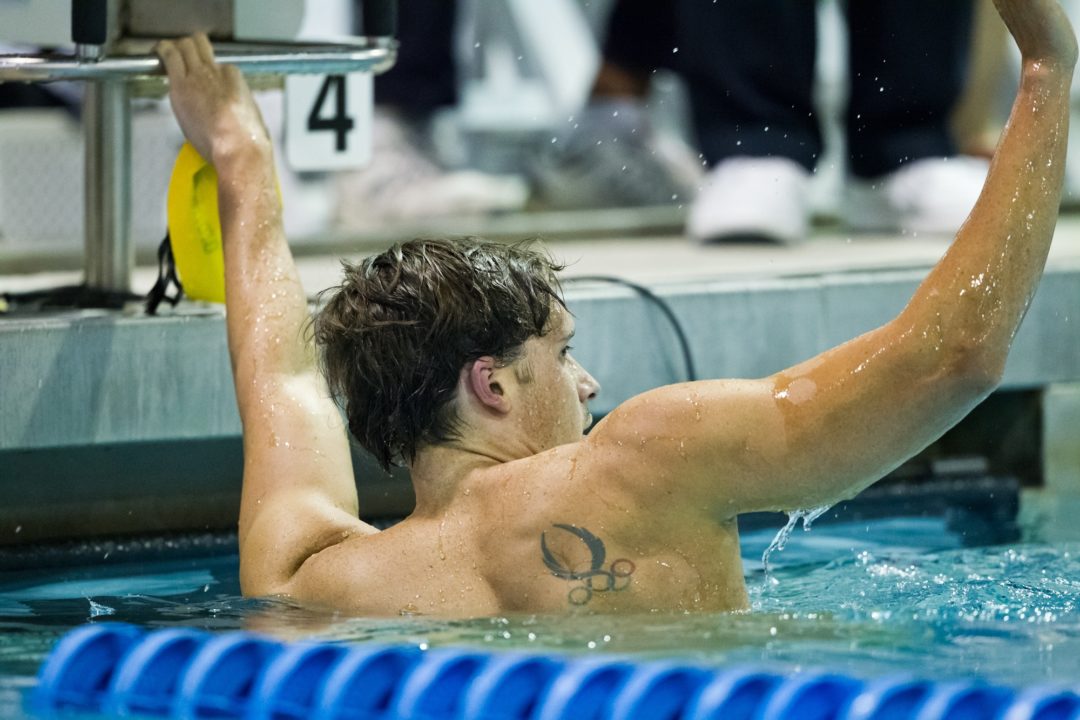 Eric Shanteau is one of 6 inductees into the Auburn Swimming & Diving Hall of Fame Class of 2015. Archive photo via Tim Binning/TheSwimPictures.com

At a program with the swimming history of Auburn, every inductee is an impressive one, but the Auburn Swimming & Diving Hall of Fame Class of 2015 will stand against that history as a list of one of the greatest ever.

David Marsh, Kirsty Coventry, and Eric Shanteau are the three inductees in the Class of 2015, with Richard Quick, Jimi Flowers, and Ralph Crocker joining them as honorary inductees.

The hall began in 1996 when it welcomed its first inductee: Rowdy Gaines. Since then, it has grown to 33 total members.

Marsh’s coaching record is unparalleled in collegiate swimming. In total, he led the Auburn Tigers to an NCAA record 12 national championships between the men’s and women’s teams, making him the most successful national coach in the history of the SEC in any sport.

Marsh was also a swimmer at Auburn, where he earned five All-American honors as a backstroker and was the 1980 SEC Champion.

Shanteau’s swimming resume is very impressive in its own right, and he won 11 All-American awards while at Auburn and qualified for two Olympic Teams. That includes a gold medal as part of the American 400 medley relay in London in 2012.

He also has his name in the current World Record books as part of the 2009 World Championship 400 medley relay that improved the old mark by over two seconds, swimming 3:27.28.

For all of his swimming success, however, Shanteau might still be best remembered for the circumstances under which he had that success. In 2008, a week before the 2008 Olympic Trials, he found out that he had testicular cancer. He opted to put-off treatment to contend for a spot, and ultimately made the team in the 200 breaststroke. Shanteau’s cancer has since gone into remission, and he’s become a high-level crusader for funding cancer research and treatment in the United States.

The three honorary inductees are also important parts of this program’s history and success. Ralph Crocker was a long-time assistant with the program and was the head of the 2001 USA Swimming National Team Distance Camp in Colorado Springs, and was also a member of the 1975 NCAA team. Crocker passed away in 2007 at the age of 52.

The late Jimi Flowers was a former USA Swimming National Team Director from 1989-1983 and an assistant at Auburn from 1984-1989 and 1995-1999. Auburn head coach Brett Hawke once said that “Jimi Flowers’ enthusiasm and dedication for Auburn swimming and diving was paramount in the rise of our program through the past few decades,” showing the impact he had on the program.

Flowers’ biggest legacy, however, has been on the U.S. Paralympics program, where he was once the swim team manager and coach. In 2010, about a year after his death, the organization dedicated “Jimi’s Corner” to the many inspirational quotes that Flowers would bring to the pool every day, and the site has become one of the most revered monuments in swimming.

And finally, former Auburn head coach Richard Quick stands alongside Marsh as two of the, if not the two, most successful coaches in NCAA history. He coached Team USA at the Olympics on 6 straight occasions from 1984-2004. He spent time coaching at SMU, Stanford, Texas, and Auburn, including a second stint at Auburn after the 2007 season. The record that Marsh’s 13 NCAA titles broke belonged to his former coach Quick, who had 12 total across the different programs he led. Quick also passed away in 2009.