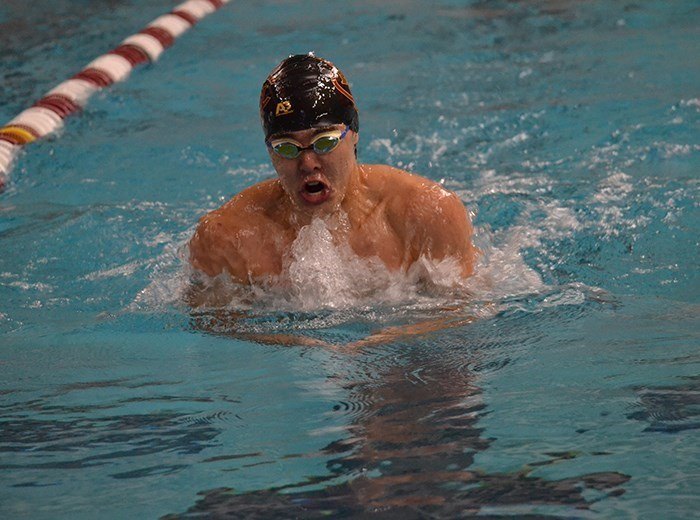 Mary Saiz won the 200 backstroke in an automatic qualifying time of 1:59.86 highlighted the final day of action at the A3 Performance CMU Invite Saturday (Dec. 3).

The CMU men and women both won the team titles.

“I am extremely pleased with the way that both our women and men competed over the past three days in the pool and on the diving boards,” said head coach Geoff Hanson. “To get individuals qualified for the NCAA Championship at this point of the season is a great step toward what we want to accomplish in February and March. This group bought into the team concept from day one back in August and hit the ground running and I think that two women’s relay school records (200 free relay and 400 free relay) are evidence of that. It was great to see them get a little bit of the payoff for their hard work, but with more than two months until the conference championship meet and three months until the NCAA Championships there is a lot more work to be done.  We’ll regroup and reevaluate things in the coming days, but we are in a great place mid-season as a team and I’m very proud of this group.”

Mary Saiz anchored the 400 free relay to a win in a NCAA “B” cut time of 3:26.90. The time broke the school-record by over five seconds and is currently the third fastest in Div. II. Other members of the team included Marissa Bradley, Sam White and Madelin McClain.

The Mavericks won four other events on the night.