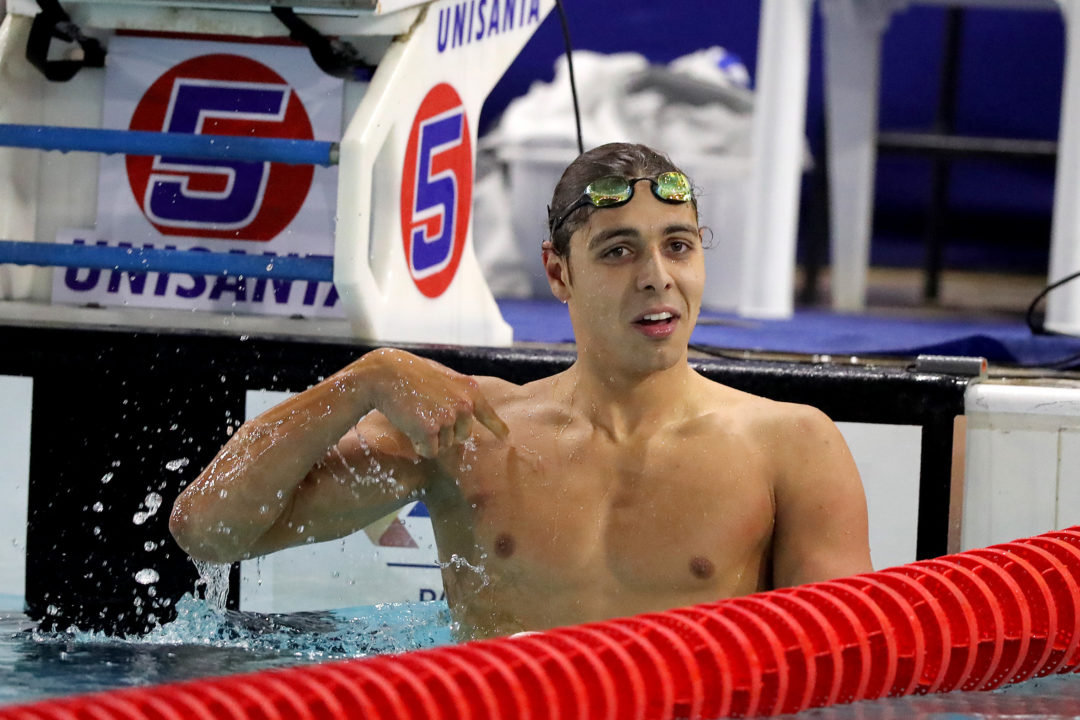 Vinicius Lanza won the men's 100 fly on the opening night of the Jose Finkel Trophy in Brazil. Current photo via Satiro Sodre/SS Press

The opening night of the Brazilian Jose Finkel Trophy being held in Santos, Sao Paulo was anything but boring, as the finals session featured close races across the board.

The most surprising upset came in the men’s 100 breast, which featured Felipe Lima and Joao Gomes, who are coming off 10th and 11th place finishes in the event at the World Championships, and 2016 Olympic finalist Felipe Franca.

However, amid the stacked field, it was Pedro Cardona of Pinheiros who prevailed in a time of 1:00.58. The win is hardly a shock, as Cardona was 3rd at the Maria Lenk Trophy this year ahead of Franca, but he was a surprising winner given his competition. Lima touched 2nd in 1:00.79, and Franca (1:00.83) and Gomes (1:01.17) both added a bit from the prelims to take 3rd and 4th.

Henrique Martins, who finished 11th in the 100 fly in Budapest, established himself as the clear front-runner in that race in this morning’s prelims putting up a time of 52.05. However, tonight he faltered a tad, conceding the win to Indiana Hoosier Vinicius Lanza. Lanza won in 52.56, with Martins out-touched in 52.63. Iago Amaral emerged from a crowded field to take 3rd in 53.39.

The women’s 400 free was an absolute dogfight, as could have been anticipated after the heats where the eight ‘A’ finalists qualified within 1.1 seconds of each other.

A similar battle transpired in the men’s race, with 2nd through 5th all in the 1:55-range at the halfway mark, with Luiz Altamir leading in 1:54.14.

Nearly even-splitting it, Giuliano Rocco and national record holder Brandonn Almeida began to pull away from the field, with Rocco winning the final sprint thanks to a 27.87 final 50. He won in 3:51.42, with Almeida right there in 3:51.55. Altamir held on for 3rd in 3:52.67.

The night closed with the 4×50 free relays, where we saw more separation from the medalists than we did individually.

After day 1, Minas leads the men’s race with 207 points to Pinheiros’ 183. Pinheiros has an overwhelming lead on the women’s side with 243, which puts them well ahead in the combined race as well.

A fight between us and Brazil on men side would be.