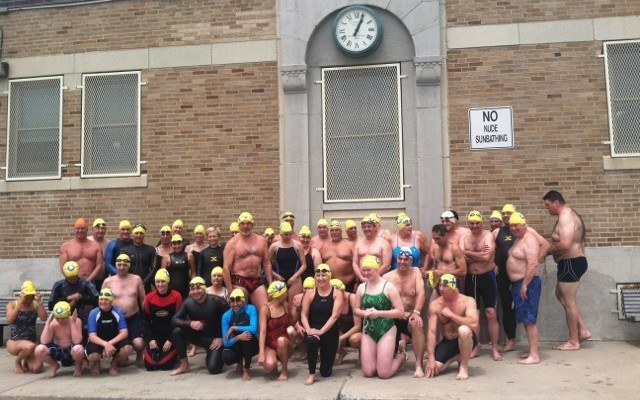 Of the dedication ceremony, Massachusetts Open Water Swimming Association President Greg O’Connor says, “It feels good to see the open water swimming community give back to someone who gave so much of himself.”

On Saturday, June 14, 2014, overcast, drizzly skies fortuitously perked up just before the start of the Third Annual James J. Doty Memorial Mile Swim held at the L Street Bathhouse (Curley Community Center) in South Boston. Fifty-one swimmers from as far away as Maryland and Maine came out for the event. Of those swimmers, 49 finished the entire 1-mile loop, with Nathaniel Dean of Arlington, Mass., finishing first in a time of 22:44, also winning the men’s nonwetsuit division. First nonwetsuit female finisher was Katherine Owen of Arlington, Mass., in a time of 25:45. Among the swimmers who opted to wear wetsuits, Katie O’Dair of Watertown, Mass., finished first for the women with a time of 24:00 and John Minigiello of Boston was the first wetsuited man to cross the line in 24:01. (Full results are listed below.)

But the day was not just about placements, finisher awards, and fast swimming. Rather, what turned out to be a beautiful summer afternoon in South Boston was dedicated to the memory of a legendary swimmer and community builder, former professional marathon swimmer Jim Doty who passed away in 2012 after a long illness.

Prior to the start of the race, swimmers and members of the Doty family along with friends of the family and other members of the community participated in a heartfelt remembrance of Jim Doty and a dedication ceremony for the two new clocks that have been installed at the L Street Bathhouse in his memory. Several friends, swimmers, and family members spoke of how Jim had influenced their lives and their swimming pursuits and thanked him for his generosity of spirit, time, experience, and passion for life.
Close friend and swimming partner Dr. Joel Saperstein—a retired orthopedist whom Jim nicknamed “Dr. Chicken” for his hesitancy to jump in Gloucester Harbor one day in December 1969—spoke of how much he misses Jim everyday. Sharon Beckman, a law professor at Boston College who swam the English Channel in the 1980s and trained occasionally with Jim said that Jim was responsible for creating a lot of lifelong friendships in the swimming community. Jim’s daughter Elinor Juviler also spoke at the ceremony about how much her father loved swimming.

Of the dedication ceremony, Massachusetts Open Water Swimming Association President Greg O’Connor says, “It feels good to see the open water swimming community give back to someone who gave so much of himself.” The clocks that have been installed at the L Street Bathhouse will aid swimmers training in the harbor, “and that seems a fitting memorial,” O’Connor says.

To celebrate Jim’s accomplishments and to formally dedicate the clocks, the Boston Fire Department’s fireboat cruised past spraying water, an appropriate and exuberant tribute for a waterman who is missed greatly by friends and family alike.

Many thanks are in order for the Doty family, the Curley Community Center, the New England Marathon Swimming Association, Stan Luniewicz, Fred Ahern, Bob McCormick, and the cast of volunteers who helped put on the event. Product sponsors included Hammer Nutrition, the Arizona SCAR Swims, the Boston Fire Department, and the No Name restaurant.

Jim Doty, who passed away in 2012 after a long illness, was a local open-water swimming legend who charted new marathon swim routes and adventures all around New England. He picked up open water swimming in his 30s to lose weight and soon became a top competitor in the elite ranks of marathon swimmers. From participating in the 24-hour La Tuque relay event in the 1960s to setting numerous distance and speed records to and from the Boston Lighthouse, Graves Light, around Cape Ann, and several other iconic locations, there isn’t a body of water in New England that Jim didn’t swim. Jim was also responsible for forming the nonprofit New England Marathon Swimming Association (NEMSA), which is dedicated to promoting swimming and a clean aquatic environment in New England. Jim re-started the Boston Light Swim back in the mid-1970s after a long hiatus; the 8-mile BLS is the oldest open-water swim race in America dubbed “The Granddaddy of American Open Water Swims,” and is used by many open water swimmers as a launching pad for more arduous challenges like solo crossings of the English Channel.