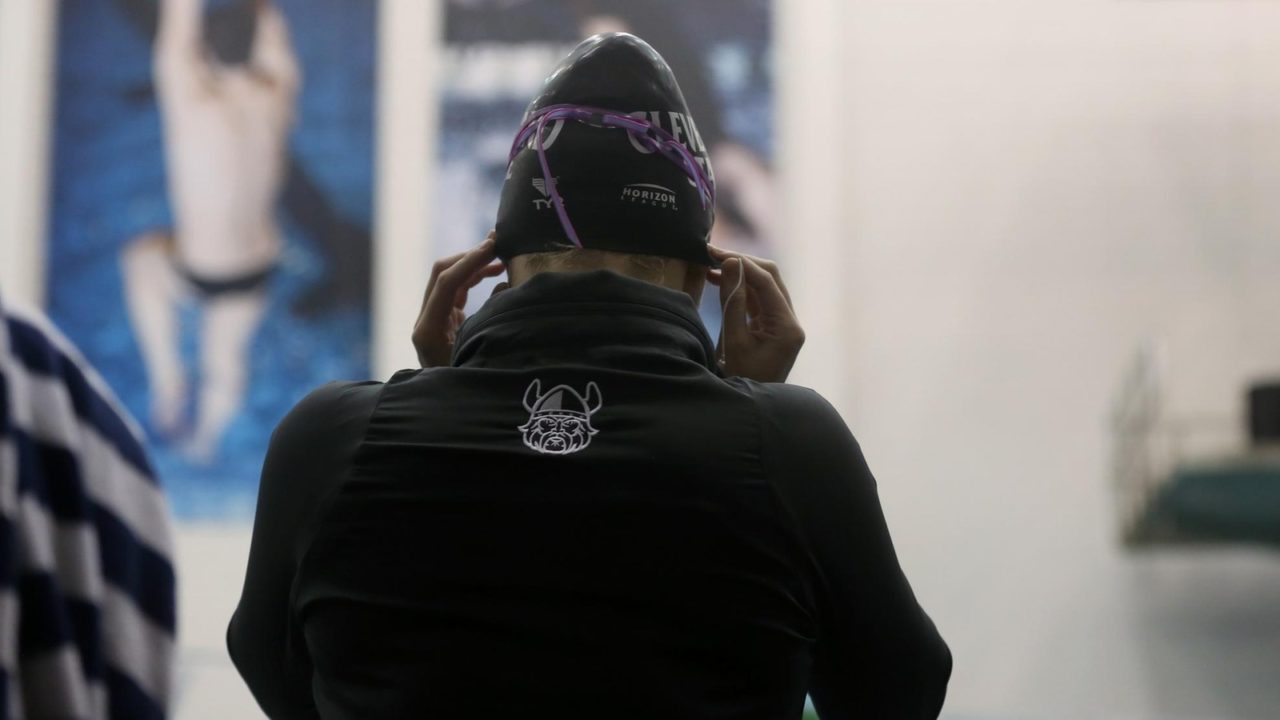 CSU will travel to Notre Dame (Ohio), where the women and men will compete separately at 1:00 p.m. and 5:00 p.m., respectively. Stock photo via Cleveland State Athletics

CLEVELAND, Ohio – Cleveland State Athletics has announced that its men’s and women’s swimming & diving programs are scheduled to begin their 2020-21 seasons this week.

The Vikings are scheduled to commence their campaign against a fellow Cleveland-area opponent on the road. CSU will travel to Notre Dame (Ohio) this Thursday, Feb. 11. The women and men will compete separately with the women’s meet set for 1:00 p.m. and the men’s meet to follow at 5:00 p.m.

Cleveland State is set to begin its second season under the guidance of head coach Hannah Burandt. Burandt led the Vikings to numerous successes in her first season at the helm as she helped both the men’s and women’s programs to runner-up showings at the Horizon League Championships.

On the women’s side, Burandt led the Vikings to the best showing by a CSU squad at the league meet in seven years, in terms of both placement and point total. The CSU men won six titles at the league championships under Burandt’s guidance, the program’s second-best mark over the past seven years.

Senior Timothy Kubacki is one of the top CSU returnees after being named the Horizon League Co-Male Scholar-Athlete of the Winter Season last year. Kubacki became the first Viking to sweep the IM events at a league championship in 25 years while he also shattered the school record in the 400 IM at the 2020 league meet. Classmate Dominik Niedzialek returns for the Vikings after winning the 100 backstroke league title as a junior. He also took runner-up honors in the 200 back while setting a new school record in the process. Fellow senior Matt Akers is back to lead the men’s diving contingent. The 3-time NCAA Zones qualifier had the highest 3-meter score in the Horizon League last season and won 10 of 12 events he contested during the 2019-20 regular season.

Junior Agnes Bahr is the top returning HL Championships point-earner on the women’s side for CSU. She was the runner-up in the 400 IM at the league meet last season, tallying a new personal-best time in the event, and also added top-10 showings in two more individual events (200 back, 200 IM). Senior Lexie Kostelnik is back to lead the Vikings’ distance crew after posting top-five individual finishes in both the 500 free and the 1650 free at the 2020 league meet. Sophomore Emma Kerro will look to follow up an impressive debut season on the diving boards last season. Kerro broke the 3-meter school record during the Magnus Cup and notched top-five showings in both diving events at the league championships.

This will be the first time that Cleveland State has faced the Falcons in dual competition since the 2013-14 season; CSU had formerly hosted NDC each season for a stretch overlapping the first two decades of this century. In that 2013 meeting, both the CSU men (206-23) and women (198.5-36.5) dispatched of NDC while the Vikings hosted a tri-dual. Notre Dame did send its teams to the 2014 and 2015 Magnus Cup meets held at Cleveland State.

Notre Dame will be competing for the second time this season, although it will be swimming at home for the first time, as it opened last weekend at Salem. The men dropped a tight, 13-point decision, while the women topped the Tigers with ease in a dual meet. The NDC men, fresh off their first Mountain East Conference Championship, were overwhelmingly tabbed as preseason favorites in the league this season, while the Falcon women were placed fourth in the eight-team MEC preseason poll.

Additional dates of competition for the Vikings will be added once confirmed. The schedule pages on CSUVikings.com will be continually updated with additional meets as they are finalized.

Fans of Cleveland State swimming & diving and Cleveland State Athletics are invited to join the Viking Fund by visiting www.csuvikings.com/VikingFund. The financial support benefits all 330+ student-athletes as they become champions in the classroom, in the community and through competition. For more information on the Viking Fund, contact Assistant Athletics Director Brandon Longmeier at [email protected] or call 216.630.2974.