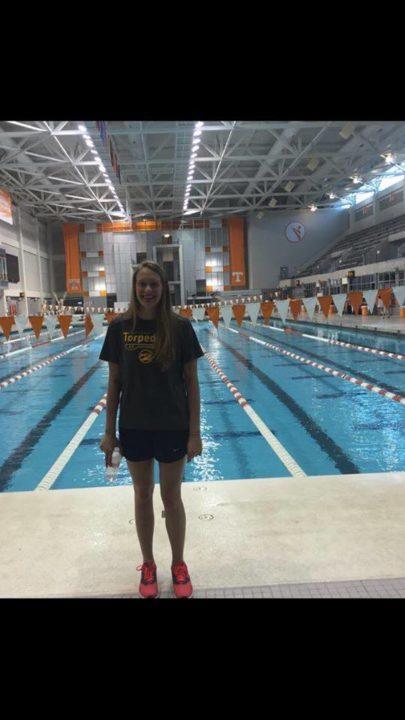 Megan Sichterman has verbally committed to the Tennessee Vols for the 2017-18 season.

High school junior Megan Sichterman has verbally committed to the University of Tennessee Volunteers for the 2017-18 season, their first public commitment for the class.

Tennessee is coming off a 13th place finish at the NCAA Championships, but is within striking distance of the top-10. Their strength recently has come in the sprint freestyle relays, but with graduations from Faith Johnson and Harper Bruens this season there will be a void to fill. Sichterman has a lot of room to improve but could potentially be a contributor in the future. She is also very strong in the butterfly events, as she is the reigning Ohio State champion in the 100 fly. She and Maddy Banic (going into sophomore season) will form a formidable duo in that event once Sichterman arrives. Banic made a second swim at NCAAs in her freshman year.

Sichterman hails from South Lebanon, Ohio where she swims for Countryside YMCA. She also competed for Kings Mills High School. She is a triplet, with her two brothers being division 1 football prospects. She claimed the Ohio State title in the 100 fly in 2015, and was the runner-up this year. She was also the YMCA Long Course national champ in the 100 fly in 2015.

So excited and blessed to announce my commitment to swim at the University of Tennessee!! Go Vols????????! pic.twitter.com/HI5bkku5LP