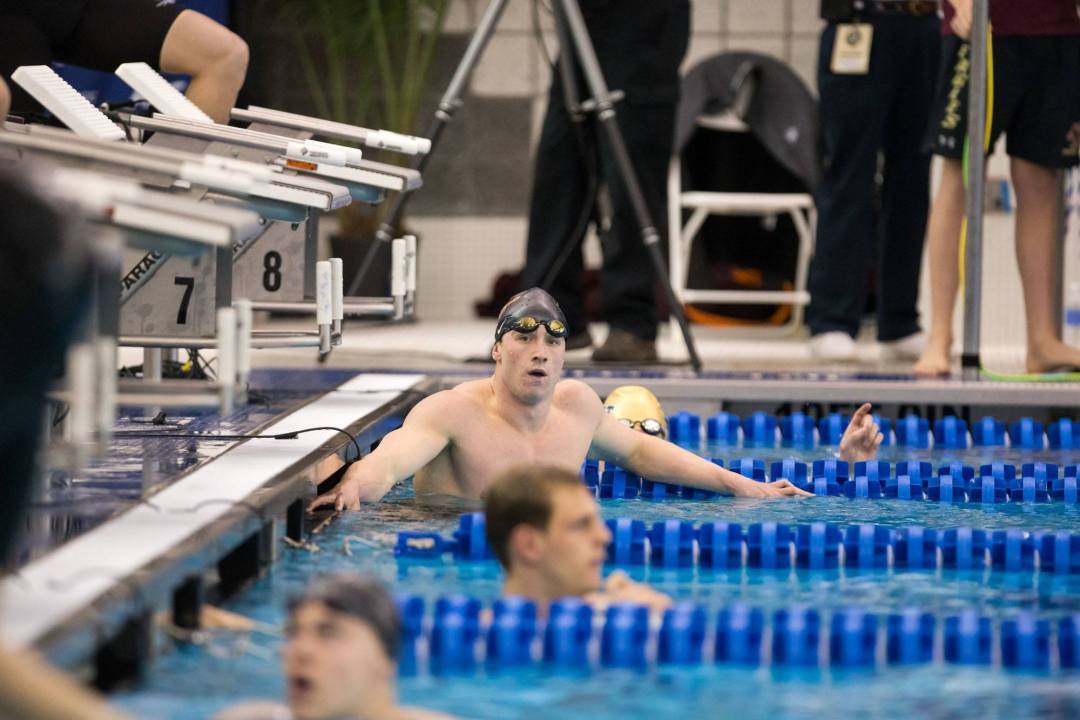 CJ Fiala (above) is ahead of defending NCAA Champion Kristian Gkolomeev of Alabama headed into the 50 free final at the H2)kie Invitational. Archive photo via Tim Binning/TheSwimPictures.com

Day 1 of the 2014 H2Okie Invitational in Blacksburg, Virginia featured a strong performance from the host Virginia Tech Hokies with the top qualifiers in four out of the first six events.

Participating teams at this year’s meet:

The big clash of the morning came in the men’s 50 free, where Virginia Tech’s CJ Fiala, who transferred in prior to last season from UNC-Wilmington, took the top seed over the defending NCAA Champion Kristian Gkolomeev from Alabama. Those two teams combined to occupy the top seven spots in prelims of the race, including the third qualifier Brandon Fiala, younger brother of CJ, in 20.71.

In the women’s 50 free, Megan Howard from the impressive mid-major sprint program at William & Mary took the top seed in 23.01 ahead of South Carolina’s Meredith Vay (23.21) and a tie for 3rd between Caroline Buscaglia (23.26) and Margaret Parcell (23.26), both of Virginia Tech. William & Mary’s Jaimie Miller gave the Tribe two of the top five qualifiers.

The Hokies got another big morning swim from Owen Burns in the men’s 200 IM, where he swam a 1:47.76 to place ahead of South Carolina’s Kevin Leithold (1:48.36). Those two weren’t far off of each other on any one leg of this race, indicating room for a very close battle in finals.

Burns, who was 8th at ACC’s last year in this event, is in fantastic position with that swim that is already a full second faster than he was at this same meet last season. The senior Burns has had a predictable and reliable pattern in the 200 IM through his first three seasons at Virginia Tech, with a very good mid-season swim followed by a corresponding ‘pop’ at ACC’s. He’s now looking at a 1:44-low or even 1:43-high range for ACC’s, if the pattern holds, which would likely earn him a first NCAA individual swim.

Virginia Tech sophomore Jessica Hespeler swam a lifetime best of 4:45.76 in the women’s 500 free – improving upon the 4:48.53 she swam at ACC’s last year. That bodes very well for the 200 free, her best event, that is yet to come later in this meet, where a proportional drop will put her within range of earning an individual invite to NCAA’s.

Caitlin Daday from the famous Villanova distance program is the 2nd qualifier through in 4:48.99 and Victoria Mitchell from South Carolina is 3rd in 4:49.20.

In the men’s 500 free, Marwan el Kamash took the top seed in 4:22.55, just ahead of Virginia Tech’s Michael Szuba. Szuba will be a crucial part of Virginia Tech’s hope to repeat as ACC Champions this year, and if he were able to dip under his lifetime best of 4:21 already on Thursday evening, that would be a big sign to the sprint-heavy North Carolina State Wolfpack, who are racing at the Nike Cup this weekend.