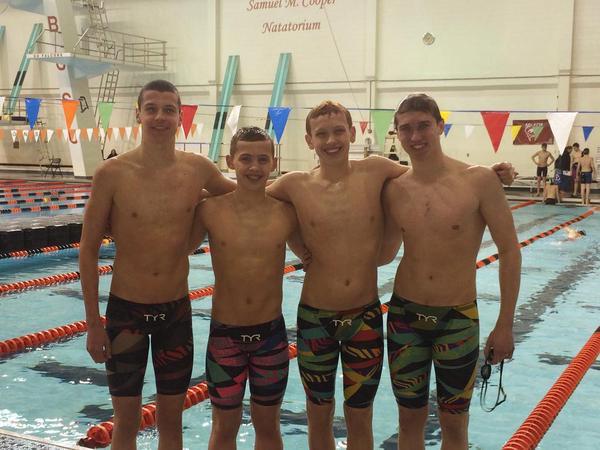 From left to right: Justin Grender, Carson Foster, Jake Foster, and Philip Brocker of Cincinnati Marlins, who broke the NAG in the boys 13-14 400 medley relay on Saturday at Ohio Junior Olympics.

The Cincinnati Marlins are tearing it up at the 2015 Ohio Short Course Junior Olympic Championships in Bowling Green. After Adam McDonald broke the 10-and-under NAG records in both the 50 breast and 100 breast, the boys 13-14 relay follow suit with a new record in the 400 medley relay.

Justin Grender, Carson Foster, Jake Foster, and Phil Brocker combined for 3:28.99, nearly a half-second under the old record of 3:29.45 set by AquaZot Swim Club at CA/NV Speedo Gold Sectionals at Golden West College in December of 2011.

Wow that is I credible. Great time by Phil