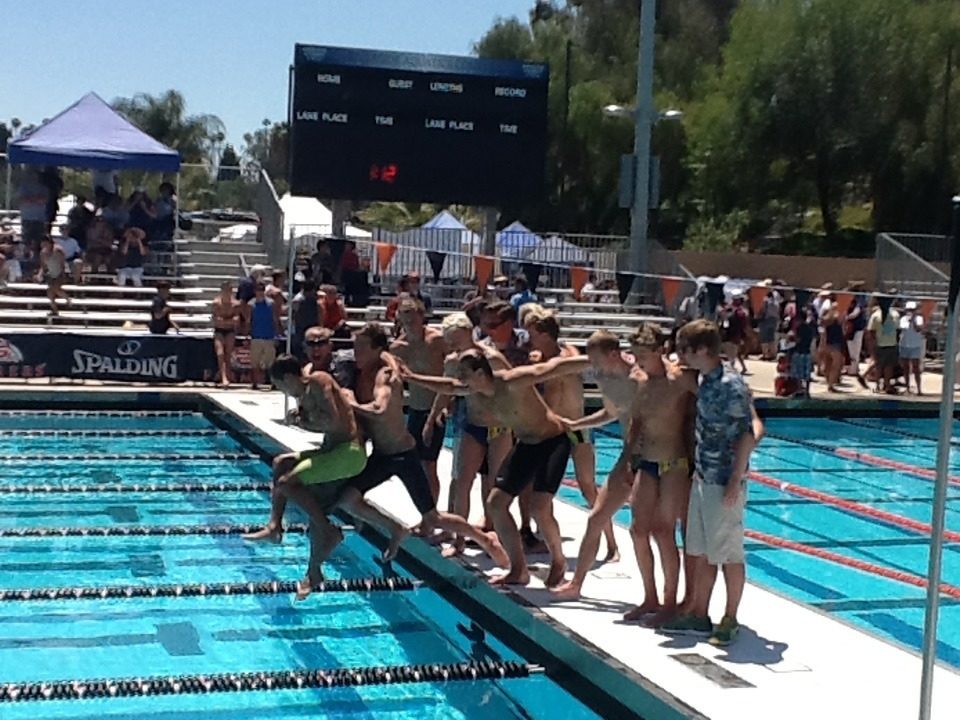 The Los Osos boys team is hoping to repeat their 2013 CIF-SS Division 2 title this year; they have the roster to make it happen. Meanwhile, Glendora seems to have the depth necessary to stay out front in the girls' race. Archive photo via Anne Lepesant

Ayala had a strong team, with several event winners and record-breaking relays: both the 200 and 400 free relays came away with new D2 standards at last year’s meet. Martin Luther King’s squad was young, with good depth but not a lot of star power.

Eighth-place Glendora would have finished fifth had they not disqualified in the 400 free relay. Having only graduated one senior in an otherwise very young team, and with the influx of strong freshmen, Glendora has become the team to beat this year. Freshmen Alexis Margett and Gisel Olvera and sophomores Catherine Sanchez and Amelia Feick are expected to lead the Tartans in individual points, and two of their relays are seeded at the top.

King returns senior standout Alex Wolf (a San Diego State commit) who tallied 32 individual points last year. The strength of this team is in its consistency; they seem to get swimmers -and divers- into just about every final. In addition to Wolf, sophomores Claire Fisch and Annisa Barroso, and junior Nicole Item, as well as divers Raina Brommer and Mallorie Lippincott will be counted on to keep King in the running.

In addition to strong relays, Vista Murrieta boasts senior Angie Phetbenjakul, sophomores Miriam Gonzalez and Tiffany Berlin, and freshman Anna Scotese, all of whom should keep Vista Murrieta within range of a team title.

200 free: Seven of the top ten finishers from 2013 are back to contest this event. Defending champion Kat Wickham of Palm Springs and fellow seniors Maddy Meisel (Millikan), Cori Casper (Ayala) and Kira Makuta (El Segundo) are all looking for a win to crown their high school career. Junior Teresa Lo and sophomore Catherine Sanchez were in the mix last year. Heather Mac Dougall (sophomore, Crescenta Valley) has the top seed time but freshman Taylor Ault from Sonora is most likely the one to beat.

500 free: Most of the same players are contending for the 500 crown but Sonora’s Ault is the hands-down favorite, and probably by a significant margin. The battle for second, however, should be intense and a lot of fun to watch.

100 back: *record watch* Sonia Wang, a junior from Upland, is entered with a 54-high; the record is 54.21. Her personal best dates from Sectionals in December 2012 and she’s only swum it once since then. She may have a big drop in her this time around.

100 breast: Any one of the first eight seeds could come out on top in this race. Senior Angie Phetbenjakul (Vista Murrieta) comes in with the fastest seed time but she is followed closely by Lauren Wood (junior, Chaparral). King’s Alex Wolf and Walnut freshman Emily Honng are seeded right together. The next four are bunched up, about a half-second to a second back: Shelby Andrade (junior, Xavier Prep), Glendora’s Feick, sophomore Amy Okada of Beverly Hills, and Glendora freshman Margett.

Los Osos overtook defending champions Crescenta Valley last year thanks to strong individual performances and two record-breaking relays (200 free and 400 free). Most of that championship team is intact; they returned Kyle Coan, now a senior and heading to Cal in the fall, who won two events and set the CIF D2 200 free record in the process. Other big names on the roster include Michael Forbes (UC Santa Barbara-bound senior), Brian Whittington (junior), and Ethan Trieu (freshman).

Murrieta Valley, fifth in 2013, fields the second-strongest team this year. Juniors Adrian Gutierrez and Decker Dempsey, senior Ganem Tebet, and freshman James Bilbrey will be counted on to give Los Osos a run and to hold Arroyo Grande at bay.

Arroyo Grande finished 1.5 points ahead of Santiago/Corona last year. It’s a team that comes together and scores big on relays. Plus they’ve got senior Zachary Stevens who set the D2 record in the 100 breast last year with 55.15 (and who will swim at Cal next year). Arroyo Grande will need good performances from seniors Tyler Gamble and Hissam El-Effendi as well.

Santiago/Corona earns its points the old-fashioned way: they just get kids into finals. They don’t have superstars but they are consistent about racking up points from a lot of different people. This year junior Tanner Shore and senior Henry Hyun will spearhead the effort.

200 free: *record watch* Two seniors, two future Cal teammates. Kyle Coan of Los Osos, who set the record with 1:35.69 last year vs Ryan Kao of Kennedy, who went 1:36-mid in March. They’ll be pushed by Rowland junior Michael Wang, but the excitement will be to see the two future Golden Bears going after the D2 record.

100 fly: *record watch* Justin Chiu, a senior at Mark Keppel who will swim for MIT in the fall, is top seed but Kyle Coan won this event last year. His 48.66 was a second shy of the record so you just know he’s giving it one last go before heading off to college. Other contenders include Andrew Phan (junior, Rowland), Murrieta Valley’s Gutierrez, and Edward Yi (junior, Crescenta Valley).

100 breast: This is shaping up to be the closest race of the meet with Ayala sophomore Hunter Sa-Nguansap seeded at the top, followed closely by Walnut senior Derek Kao, record-holder Stevens of Arroyo Grande, and Keppel’s Chiu.

Psych sheets and results can be found here.

Can’t wait to see my favorite boys from Osos go for the repeat! More CIF records on the way!