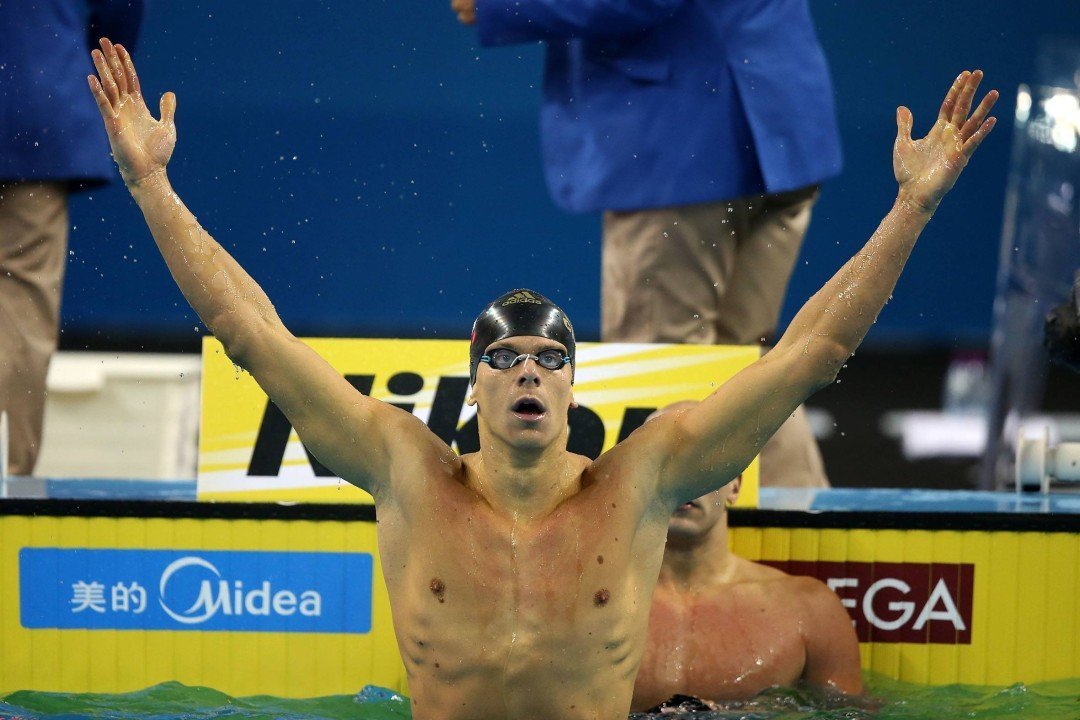 In two separate interviews with SportTV Brazilian superstar Cesar Cielo discussed the path to the 2016 Olympics and his future beyond Rio... Current photo via Satiro Sodre/SSPress

2016 Olympian Larissa Oliveira had a trio of solid swims in the women’s freestyle events, posting the top time in the 50, 100 and 200 free.

In two separate interviews with SportTV Brazilian superstar Cesar Cielo discussed the path to the 2016 Olympics and his future beyond Rio.

Cielo expressed confidence in himself and his teammates saying that he felt that the Brazilians had a chance at a possible five medals at the Olympics in Rio.

He sees himself medalling once again in the 50 freestyle. He also feels that the combination of himself Matheus Santana, Marcelo Chierighini and Bruno Fratus will have a very good shot at a medal. That Felipe Franca Silva will be a strong competitor in the breaststroke events while Thiago Pereira will make his mark once again in the IM and Etiene Medeiros will be a force in the backstroke.

“We can dream with four or five medals,” said Cielo.

That confidence has been earned, especially after the Brazilians had an incredibly strong showing at the 2014 World Short Course Championships where they earned 10 medals (seven gold, one silver and two bronze).

Cielo expressed that for that success to happen in Rio the summer of 2015 will be one of most important periods in their careers, “This year is very important. This year may be the second most important in our career.”

“With a great result this year, no doubt, we enter the Olympic year with another perspective, another motivation. This year, of course, is very important to have a great result.”

The Brazilians will be aiming at both the Pan American Games in Toronto as well as the World Championships in Kazan, “Our focus this year is the Pan-American and World Swimming Championships, which will be in late July.”

“We are thinking of Olympics, with view at the end of the Olympic cycle in Rio, but this year is very important that we have a great campaign at Pan (American Games) and the World (Championships).”

In the second article Cielo expressed how he felt the Brazilians will have a significant home field advantage once the Olympics begin. The familiarity of the environment will be an important factor in their success and that any added pressure from competing in front of a hometown crowd is welcome, “I see it as very positive, very nice for us,” said Cielo.

“We have talked about how pressure can be increased being at home. But I see very simply. Every athlete arriving at the end to medal is ready to endure any pressure. The house pressure is good, it makes you want to train more, compete better and win a medal for our people.”

“I see it only as good thing. It is our food, our time, our home, our fans. It is a chance to make the best Olympics in Brazil.”

In the same article he told the publication that he sees himself focusing on individual events for only two more years at which time he will switch his concentration to becoming a ‘relay swimmer’, “I’m aiming for 2016 and 2017 as the years in which I can still stay at the level that I am, maximum demand, high performance,” said Cielo.

The multiple Olympic medalist also expressed that he was very happy that Brazil has put together the facilities and the support staff that is needed for success on the international stage. For him leaving to the United States for college was an important step in his development, but at this point in his career he is very happy to have the opportunity to train at home.

Wish there was a 200 free relay in Rio 2016, would love to see how the Brazillians would stack up against the U.S and French