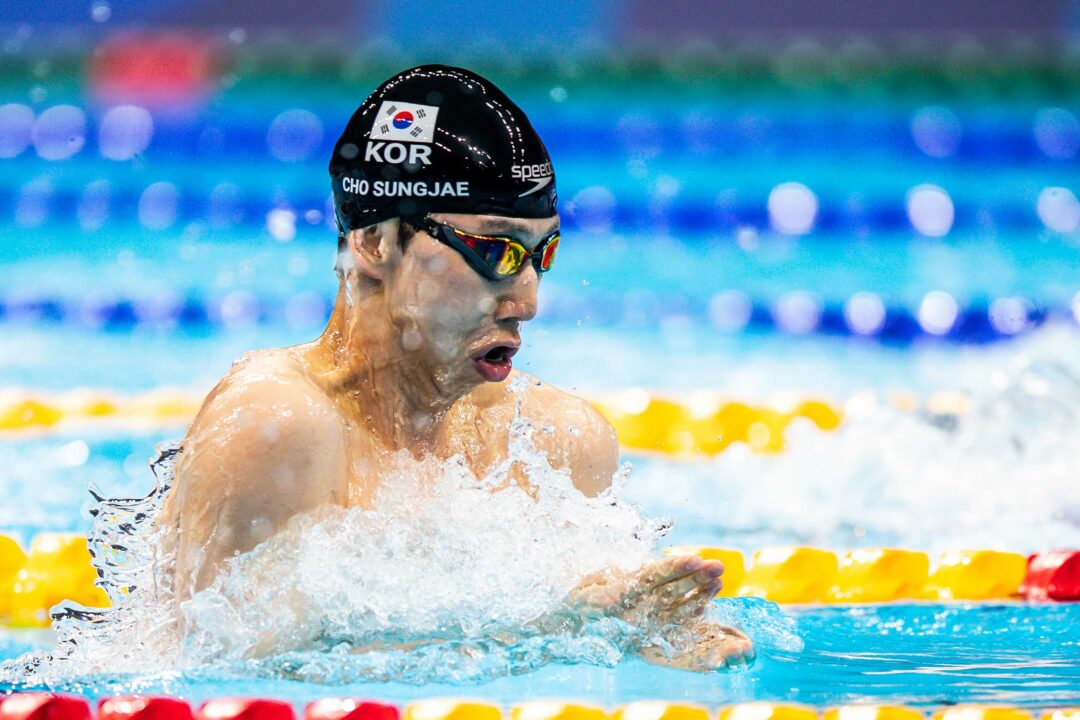 Korea's national record holder Cho Sungjae is already near his lifetime best in the heats of the men's 100m breaststroke in Gimcheon. Archive photo via Jack Spitser/Spitser Photography

The nation of South Korea kicked off its elite selection meet for the summer’s competitions of the World Championships, World University Games and Asian Games today in Gimcheon.

Here is a quick reminder of the dates and locations of these major meets:

Although two-time Olympic finalist and 2021 Short Course World Championships gold medalist Hwang Sunwoo won’t be making his first appearance until tomorrow, there were still some solid swims on day 1.

Entering this meet, Kim was already ranked as Korea’s 2nd fastest man ever, sitting only behind national record holder Park Tae Hwan. Park owns the top time ever for Korea in a massive 14:47.38 from 2012, while Kim’s PB rested at 15:14.26 from last year’s Olympic Trials.

As such, Kim sliced nearly 3 seconds off of that result to establish a new career-quickest. Unfortunately, the time falls outside the FINA ‘A’ cut of 15:04.64 needed for automatic qualification for the 2022 FINA World Aquatic Championships in Budapest.

Also in the water contesting the men’s 100m breast heats was Cho Sungjae, the first Korean ever to dip under the minute threshold in the event. He punched a time of 59.65 at last year’s Olympic Trials and the 21-year-old repeated a similar feat in Tokyo, clocking 59.99 to wind up 20th overall in the event.

Cho is already 59.92 here in Gimcheon to set the stage for tomorrow night’s final.

According to FINA’s rankings for 2022, Cho now inserts himself onto the list of top male 100m breaststroke performers in slot #5.

Kim Seoyeong topped the women’s 100m fly with the only sub-minute time of the field. The seasoned racer clocked 59.84 to land lane 4 for tomorrow night’s final.

Isn’t Michael Andrew in the top 5 this year?

Why is Kamminga’s 58.5 in Eindhoven not recognised in the FINA rankings for 2022?

Does the results page just timeout for anyone else?