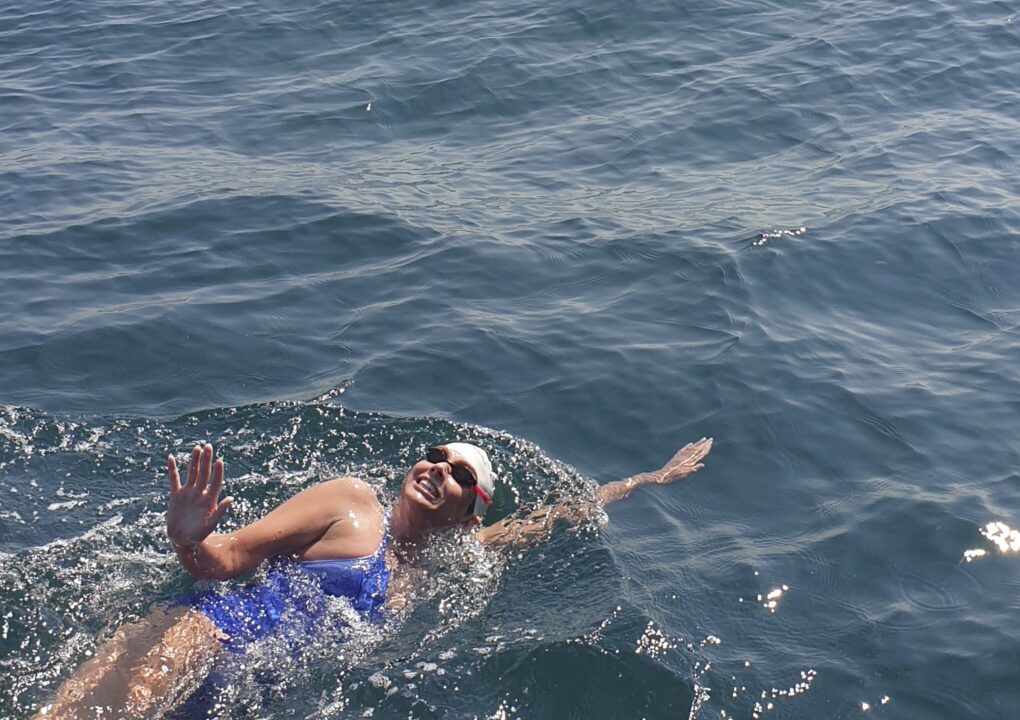 After nearly 11 hours of swimming in 57 degree Fahrenheit water, McCardel is set to do it again next week to break the "Queen of the English Channel" record. Archive photo via Chloe McCardel

Australian International Swimming Hall of Fame member Chloe McCardel completed her 43rd crossing of the English Channel on Thursday, tying the record for most crossing of the 21 mile-long channel. She left British shores and finished the route in 10 hours and 54 minutes

The water was about 14 degrees Celsius, 57 degrees Fahrenheit, according to Australian news station 7 News Australia. She embarked on the swim around 12:30 am on Thursday morning and swam for 7 hours in the dark.

When the finish line was finally in sight, she got caught in a strong tide for about an hour and a half. “French shore was taunting me,” she told 7 News Australia. McCardel noted she was managing some neck pain throughout the swim, but was enthusiastic to have notched another Channel Crossing.

The record for most English Channel crossings was set by Britain’s Alison Streeter who was awarded “Queen of the English Channel” after breaking the previous record of 19 swims by Cindy Nicholas of Canada in 1992. Streeter buried that mark by the end of her career, going from 20 English Channel swims to 43 by 2005.

McCardel explained what makes this route such a renowned marathon swimming challenge to SwimSwam before her swim: “Even though I’ve done multiple non-stop [swims], or even up to eight in one season, it’s still a very long way, it’s nonstop, the water is between 15 (59 degrees Fahrenheit) and 17 (62.6 degrees Fahrenheit) Celsius, and the tide can push you all over the place.”

36-year-old McCardel already holds the record for the longest unassisted solo marathon swim, a 124-kilometer (about 77 miles) she swam in the Bahamas in  2014. The most English Channel single swims she competed in one year was eight in 2016.

This was one year after she became the first swimmer in 25 years to complete a triple crossing of the English Channel, meaning she swam about 63 miles, non-stop. She was only one of four people to do so at the time: Streeter, Philip Rush, and Jon Erikson. The swim took McCardel 36 hours and 12 minutes.

And McCardel is not stopping at 43, she has her 44th swim scheduled for Saturday, October 16th. While two English Channel swims in just over one week is impressive, this is not new to McCardel who crossed the channel three times in one week in 2015. Her first English Channel crossing was in 2009 so she has squeezed 43 crossings into the time span of 12 years.

Just reading this article caused me hypothermia, dehydration and exhaustion. I have received medical attention and am OK now. Also, congrats you crazy woman.

And people whine about the 200 fly…