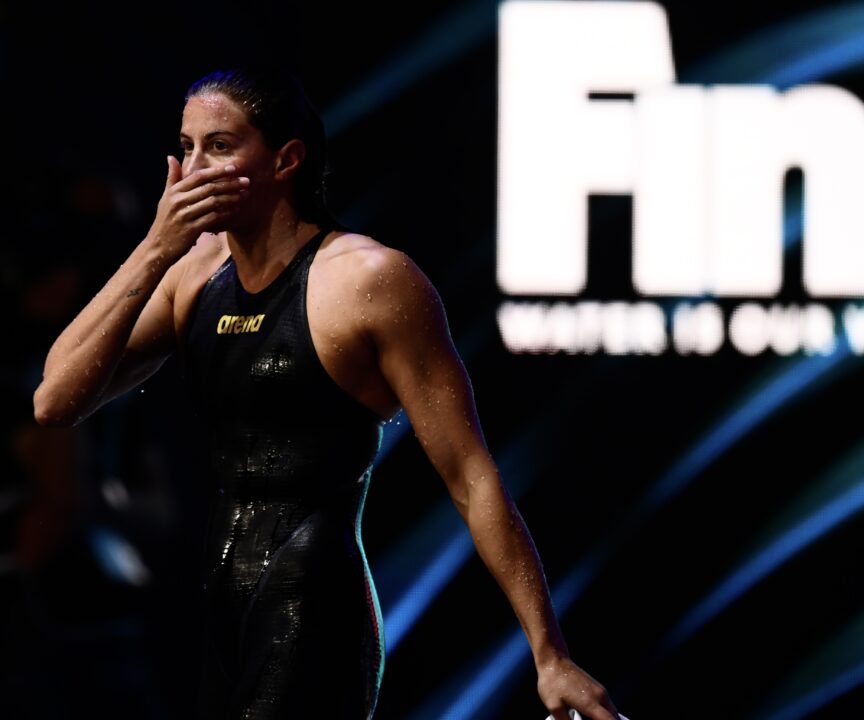 Charlotte Bonnet missed the French Record in the 200 IM by a hair in her second swim of the day, while Mary Moluh continued to crush age-group standards. Archive photo via Fabio Cetti

The meet serves a dual purpose: it is both awarding national championship spots, and it is the final selection event for the World Short Course Championships in December.

Before the meet, Julien Issouli, the National Technical Director, said that they will “take measure of everyone’s form to continue to build the most efficient French team possible, for this season and for those to come.”

While many of the veterans at this meet commented that they are not at peak form, the youth was ready to go, led by Moluh.

For the third time in two weeks, Moluh broke the French age record in the 50 short course meters backstroke. Prior to the World Cup stop in Berlin, the record belonged to Olympian Beryl Gastaldello, who swam a 27.75 in 2012.

The win, and the record, for Moluh were both a surprise for her.

“I had a satisfying evening!” she said after the race. “Especially since the short pool is not necessarily my strong point. I didn’t necessarily expect to win this 50 backstroke, given who I had next to me, Analia (Pigree), as we know, she finished 4th at the (short course) World Championships in Abu Dhabi last December, so a strong competitor. I’m happy with the time, and happy with the pre-qualifier.”

Pigree is the National Record holder at 25.96, set at those Short Course World Championships last year.

That best time lines Moluh up for an even bigger record later in the meet: in Berlin, she swam 59.02 in the 100 backstroke, which was just .03 seconds behind the French Age Record of Laure Manaudou, set in 2003.

Charlotte Bonnet continued her re-discovery of breaststroke with a win in the 50 meter event in 30.06. That’s much faster than she swam in Berlin (30.51), but slightly shy of her personal best (29.98).

That swim left her .02 seconds away from the French Record of Fantine Lesaffre – even on her second swim of the day.

“I thought it was going to be a little tighter in the 200m medley,” Bonnet said after the race. “I had a good first part of the race which gives me confidence.

In the 50m breaststroke, I’m a little disappointed with the result, but it’s completely different. I don’t work on it at all with my coach, so I see that the work pays off more in the 100m and 200m, so I’m very happy.”

While Bonnet came to the form with best times in her sights, many of the top names in attendance were more measured in their approaches. Maxime Grousset won the 100 IM in 51.49, saying afterward that the swim felt really good, but he’s not in peak form. “It’s a new race and I want to give everything and go a best time,” he said. He was successful in that – his previous best from 2019 was 53.45.

Grousset is one of a number of the world’s top sprint freestylers who is turning their eyes to this 100 IM in short course as a change-of-pace event from their normal crawl.

Marie Wattel won the 100 free in 52.66, a second-and-a-half ahead of the field. She was surprised afterward by the margin of the win, after a tight prelims race.