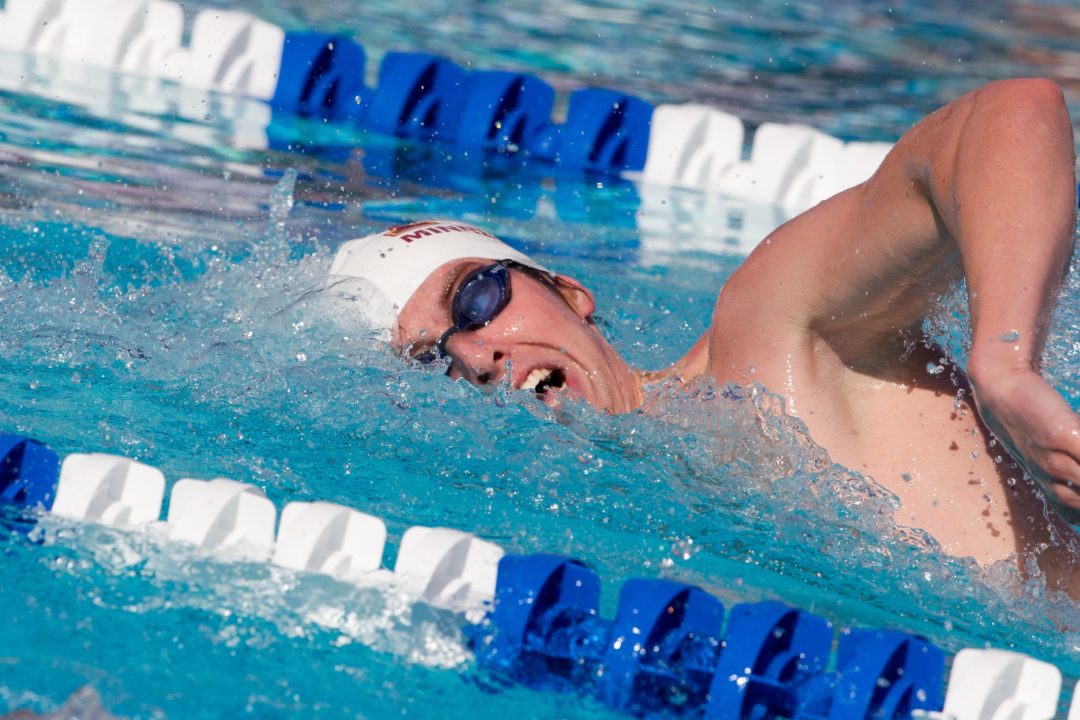 Australia's newest lightning-rod Kyle Chalmers was back in action on Friday.

Friday the 13th means nothing to a teenage wunderkind. That was evidenced by the results of day 5 of the 2012 Australian Age Group Championships on Friday, where the action was flying as fast (or faster) than it has the entire meet. 13, 14, and 15: straight up the ladder a trio of “tweens” posted spectacular swims to continue hot runs at this meet thus far.

First the younger of the group – 13-year old Kyle Chalmers who has taken the swimming community by storm this week, splitting a 24.00 to break the old National Age Group Record held by Te Haumi Maxwell from 2008 in 24.36. He was followed by a very good time from Luke Zille in 25.11.

Chalmers’ swim would have won the 14-year olds 50 free, and been 2nd among 15-year olds. That shows that even if his development slows as he ages and others catch up, he’s already poised to dominate age group swimming for the next few years in Australia.

A video emerged Thursday of Chalmers’ 100 free swim, which taught those of us not at the meet a whole lot about his stroke. He’s got a monstrous kick. His natural athleticism is clear, and he’s got very long arms. He swims with a gallop-stroke, but keeps his end up, almost out of the water, throughout most of his race. His underwaters are fairly average for his age, but it’s that kick that’s really dominating his age group right now.

Next up is the 14-year old, Nick Groenewald. He took two victories on the day, but the most electrifying was in the men’s 100 backstroke, where he won in a new Australian Age Record of 57.56, which cuts nearly half-a-second off of his own record set about four weeks ago in Melbourne. He would follow that up later in the session with a 4:35.43 in the 400 IM. Earlier in the meet, he broke Ian Thorpe’s 200 IM record, but he was still 9 secons away in this 400 IM – showing how developed Thorpe was in the longer races at a very young age.

Those three young gentlemen have really stolen the show at this meet, but the ladies were also impressive on the penultimate day of this meet.

In the girls’ 12-13 freestyle, just before Chalmers’ impressive swim, Shayna Jack out of the impressive Chandler club in Queensland took the win in 25.50. Though we’re comparing a tapered swim to untapered swims, by comparison that time is only .01 seconds slower than Olympic medalist Kara Lynn Joyce has been this season (and faster, for example, than big-time American names Dana Vollmer and Annie Fittin). That’s blazing speed and approaches the National Age Group Record held by Yolane Kukla, who is one of the most ridiculous young sprinters that swimming has ever seen (.15 away).

Jack’s teammate Lucia Lassman, who has also had a great meet, took 2nd in 26.86.

Carlile’s Ami Matsuo swam a best time to win the 15-year old girls’ 200 free in 2:00.07, which barely missed another National Age Record by about three-tenths. That’s the third-time this season she’s swum a two-minute flat time, so it was sort of surprising that she wasn’t able to dip under in this meet. Remy Fairweather, who hasn’t been spectacular in this meet in her better 400 and 800 freestyles, took 2nd in this 200 in 2:01.08. That’s a best time for her, as her speed starts to kick in as she gets older (she just aged up in the last few weeks). She didn’t swim the 200 at the National Championships, but probably would have come close to cracking two-minutes if she had.

Other notable times in the meet: